This Kentucky gentleman reveals the healing properties of moonshine, how to chug on the cheap, and why it is sometimes necessary to ride a motorcycle naked. 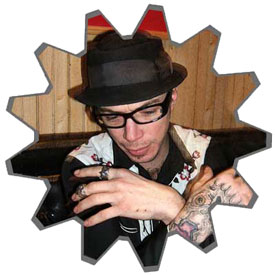 First taste:
I got it from my Dad. He was a Jim Beam man. I poured some into a Gatorade bottle and brought it to the junior high sock hop. I got busted for being drunk but I talked my way out of it. I wasn’t so lucky at home, however. My old man didn’t like the taste of watered-down whiskey. Instead of kicking my ass, he let the punishment deliver itself. A hangover at the age of twelve is worse than three kicks in the teeth. When booze was approved I was drinking hot toddies made with moonshine. I grew up on that shit and you can’t get it around here. Every time I had a cold or the flu we’d make hot moonshine tea with a lemon and hope nobody started fighting or crying.

You’ve got 20 bucks:
If I’m on the street I’ll buy a fifth of Early Times and a 16oz Coca Cola and get to it. Or I buy three cases of American Beer if I think it’s gonna be a long night. The other option is a bottle of good ol’ Irish Rose. It’s like Mad Dog 20/20. You could get mashed on that for five dollars and keep the other $15 for tomorrow. If I’m going out I’ll find the nearest bar with $2 You-Call-Its and start in on the Long Island Iced Teas. I would buy at least one person there a drink so I’d have one coming my way later when I was out of cash.

Drunkest ever:
It was at a bike rally in Salisbury, NC called The Smokeout. Seven friends and I had 38 cases of beer, four fifths of whiskey and two gallons of moonshine. It took us two days to get it all down and at the end of it all I was riding around on my chopper naked and I wrecked in the dirt. Instead of giving up, I got all my friends to join in and we began what’s now known as the naked chopper train. This was not a gay event.

Best cities to drink in:
West Palm Beach, FL: You can get damn drunk for cheap. Bars there have nickel beer nights. Louisville, KY: For every one tit there’s two titty bars. Kansas City, MO: There’s a titty bar on the outskirts of town called the Outhouse. It’s at the end of a dirt road in the middle of nowhere just like in the movie Porky’s. You can bring in your own cooler of beer and bottles of liquor. No tab, no problem.

Best 86 story:
It was at Bike Week in Daytona, Florida at this place called the Broken Spoke. I went up to this guy mouthing off to his gal and said I’d fight him for his woman. This wound up in a skirmish but I didn’t get kicked out. I went to the bar and ordered a shot of Cuervo. They were out of limes. When this happens and I’m drinking tequila I usually wind up puking. I did so all over the bar and they still didn’t kick me out. Eventually, I was doing knife tricks with my switchblade in one hand and my brass knuckles in the other, and all they could say was that they were going to tow my bike, so I left.