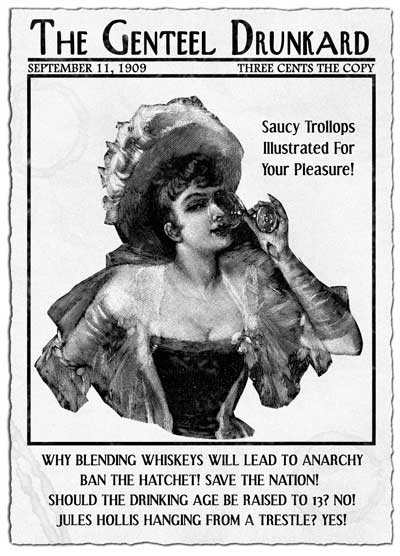 The first incarnation of what was to become Modern Drunkard Magazine was a one-page death threat written by saloon keeper Hiram Flannery Rich in 1905. A response to a recent article in the Boston Globe describing his saloon as “a fine place to tarry, so long as you don’t mind poisonous whiskey and your brain bashed in by the vile brigand posing as a saloon keeper,” it was titled If There Is a Mercyful (sic) God in Heaven Jules Hollis of the Boston Globe Will Be Murderered (sic) by Suppertime. Ten hand-copied issues, each more vulgar than the last, were passed out amongst his regulars, and they went over so well he began issuing a regular newsletter.

After toying with the title Can Anyone Tell Me Why Jules Hollis Isn’t Dead Yet?, he decided to go for a broader appeal and settled upon Genteel Drunkards Drink at Hiram Rich’s Real Irish Saloon.

The first editions were, quite frankly, mostly obscenity-laden editorials about customers who snuck dogs into his saloon or owed him money, with the occasional think-piece about what horrific tortures and tribulations could be visited upon the aforementioned Mr. Hollis. Over time, however, Hiram started including less personal articles, including, “The Art of Headthumpery,” “How to Spot a Harlot,” and inventive cocktail recipes involving copper polish and various solvents.

When he lost his saloon in the Great Fire of 1909, Hiram shortened the name to The Genteel Drunkard, hired a small staff, and launched a Boston-wide edition.

Though quite controversial (on four occasions the offices of the magazine were raided by hatchet-wielding members of the Women’ Christian Temperance Union and the Ladies of Boston Insanity League), the magazine found an audience and grew to a circulation of 15,000 issues a month.

Hiram retired in 1918 and passed the thriving enterprise to his son Horace Kelly Rich, who had recently returned from thrashing the Hun in Europe.

“Only a rare and powerful combination of raving imbecility and national prohibition could screw this sweet deal up,” Hiram told his heir. “And since there’s no way this great nation would outlaw booze, you should make out fine.” 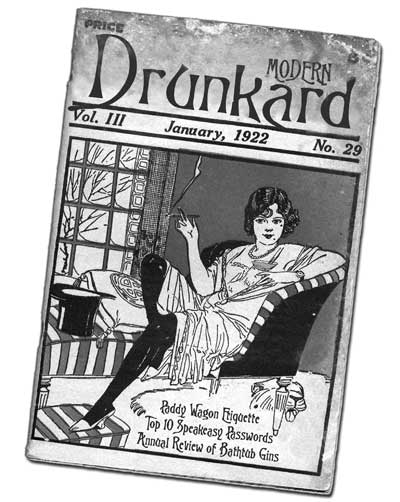 The future of the magazine appeared gloomy indeed when Prohibition went into effect in 1920. After a year of issues loaded with such bitter and vengeful articles as, “I Told You Women Shouldn’t Be Allowed to Vote, Now Didn’t I?” and “Jesus Drank Wine and When He Comes Back He’ll Murder Every Damn One of You Dry Sons of Bitches”, Horace considered pulling up stakes and moving the entire operation to Canada.

Then he became aware of the blossoming speakeasy scene.

He traded in the old-fashioned title for something more contemporary and dropped the vengeful screeds for articles designed to aid the beleaguered American drinker, including, “Top 10 Speakeasy Knocks and Passwords”, “How to Turn Turpentine Into Top Scotch in Seventeen Easy Steps” and “The Subtle Etiquette of Bribing a Cop.”

Like a flower flourishing during a drought, the magazine began turning a profit, which Horace wisely invested in the equally thriving, if somewhat illegal, alcohol importation business. It wasn’t long before the pulp magazine thrown together in a modest Boston shack grew into a glossy affair assembled in a plush Manhattan office. 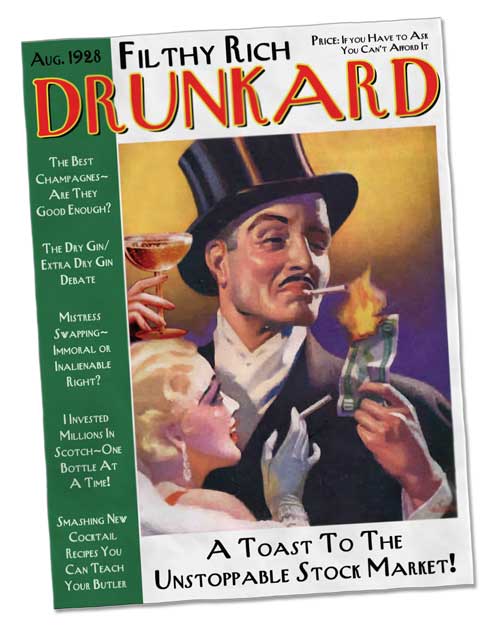 These were heady times for the young publisher. The scotch flowed like wine and the wine flowed like it was being shot through a high-pressure firehose. With the trade becoming increasingly violent, Horace divested himself of his bootlegging interests and put his money in the high-riding Stock Market. He became a millionaire almost overnight and was not the least bit shy about flaunting his wealth and power. He openly bragged about his massive (and still illegal) 1000-bottle scotch collection and would fill entire swimming pools with champagne during his outrageously decadent parties.

Then everything went to hell. 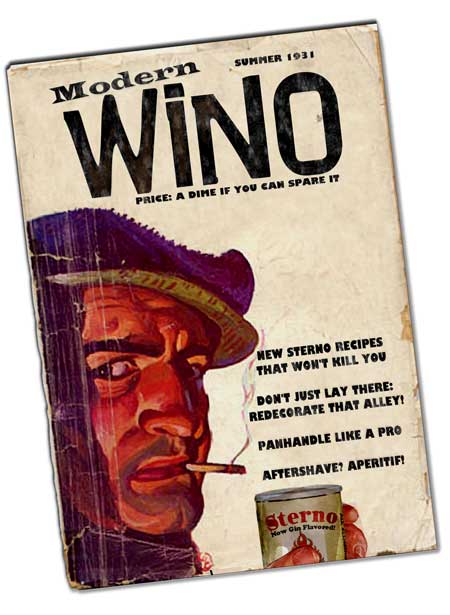 Horace lost his entire fortune in the Stock Market Crash of 1929. Too proud to sell his valuable scotch collection and too poor to buy a sandwich, he was forced to live on scotch for weeks at a time. The Manhattan office was shut down and the magazine’s headquarters was shifted back to Boston. Vainly believing the bad times would not last, Horace continued to target the ever dwindling supply of wealthy drinkers. The magazine foundered and eventually fell into the hands of Horace’s younger brother, Lucius Hiram Rich. A Princeton dropout who knew a growing market when he saw one, he kept the business alive, if barely, by revamping the publication to appeal to a rising new class of drinker: the Great American Wino. 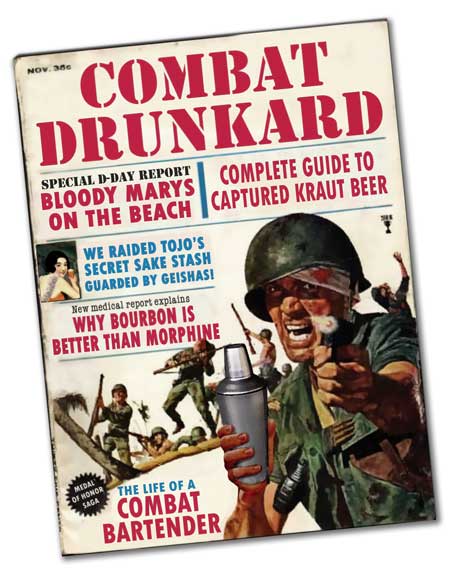 The Drunkard Goes to War

World War II not only dragged America out of the Great Depression, it opened up a whole new front in publishing.

Like all patriotic Americans, Lucius rose to the challenge when the Nazis and Japs made the mistake of messing with the US. Using his status as a Captain in the Signal Corps to get the scoop on the hottest drinking stories from the war, he kept the men and women in uniform in the know and off the wagon with informative pieces such as, “Do Teetotalers and Hitler Have More Than Not Drinking in Common?,” “Bar Hopping During the Battle of the Bulge,” and “How to Find Out Where the Ungrateful Locals Are Hiding the Hooch.” 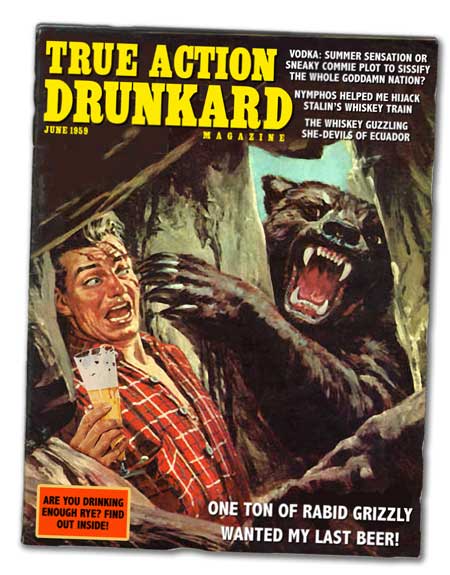 When the boys came marching home again they brought with them a powerful taste for action and adventure, especially if there were booze and broads involved. Lucius gave them all they wanted and more. Expanding the Drunkard line to include True Action Drunkard, Soused Safaris, and Barroom Battlers, these two-fisted pulps featured whiskey-soaked war stories and racy adventures dripping with sex and the sauce, including, “You Spill, We Kill! My 55 Harrowing Days as a Captive of the She-Heathen Spill-Kill Cult!,” “Will Tiki Drinks Turn You into a Fruit?,” “Attack of the Machete-Wielding Nympho Bar Hussies of Brazil!” and “We Liberated France’s Finest Wines From the Nazis, Then Drank Them!” 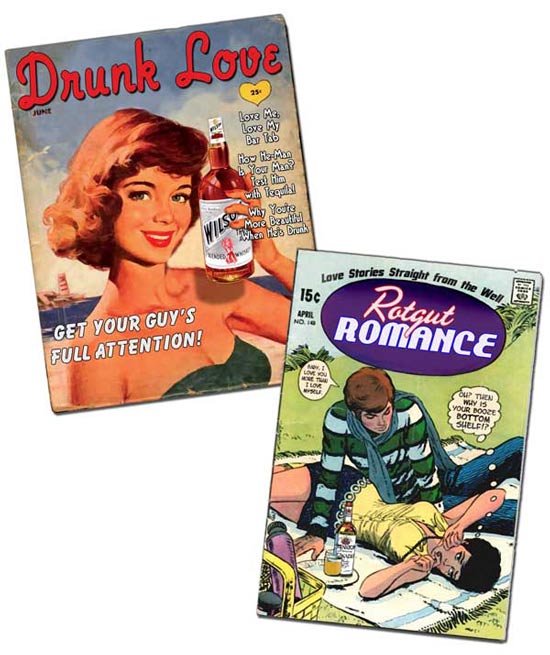 Love on the Rocks

Lucius Rich retired in 1966 and passed the reins to his daughter and son, Jilly and Jerry. Jilly, the elder and more ambitious of the pair, recognized that the periodical industry was entering a state of flux—the vast audience of action-hungry veterans Drunkard Publications so heavily depended upon was aging and the macho drinking market was losing steam. 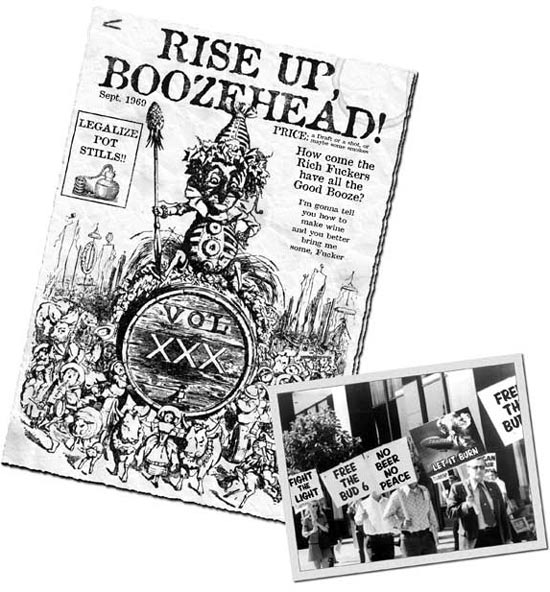 Jerry, on the other hand, was more interested in stirring up revolution than romance. He left Drunkard Publications in 1967 to independently launch his political ‘zine Rise Up, Boozehead! Armed only with a crude, hand-operated press, he ran his operation from the basement of a bar and waged a very personal war against enemies as diverse as “the fascistic booze monopolies” and the hippies down the street who wouldn’t share their wine.

Refusing to join what he called “the capitalist enslavement system,” he eschewed selling ads or issues in favor of bartering them for beer, wine, liquor, and the occasional pack of smokes.

He gained national attention in 1972 as one of the Budweiser 6, a group of idealists who staged a drink-in at Anheuser Busch’s St. Louis brewery to protest of the launch of the company’s new light beer. Jerry and his codefendants claimed the low-calorie brew was a capitalist ploy designed to turn the proletariat into “a buncha pussies.”

He would later cash in on his notoriety by appearing in a series of Night Train Winery commercials featuring the tag line, “We will sell no wine — before noon.”

In 1978 Jerry renounced his American citizenship and emigrated to Cuba to join a communal rum distillery. 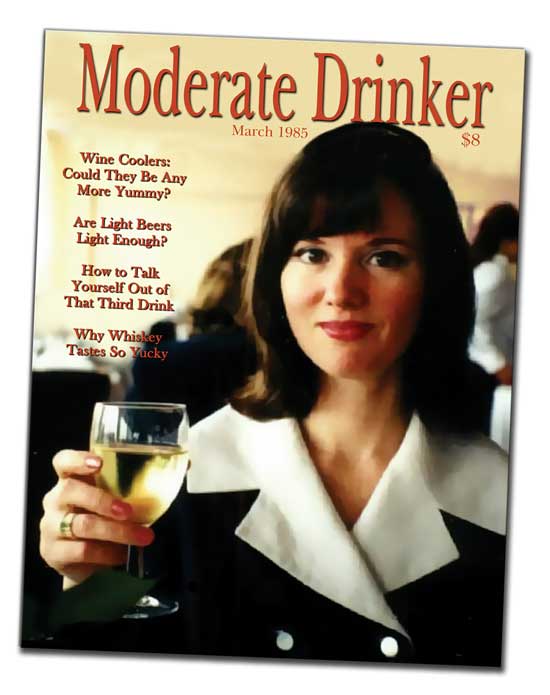 Jerry inherited the family legacy when Jilly passed away in 1984. Unwilling to return to the US to run the company, the badly mismanaged concern lurched along until the bottom fell out of the romance magazine market.

An avowed anti-capitalist, Jerry refused to sell the withered hulk of Drunkard Publications to an interested conglomerate, Proactive Paradigm Media. He was, however, willing to barter it to them for “a bottle of vodka for every day the glorious Berlin Wall stands.”

PPM’s marketing division felt drinkers cowed by the rising power of MADD represented a growing new market and launched Moderate Drinker. They introduced it to America with an aggressive, if somewhat schizophrenic advertising campaign (“A magazine for those who like to drink, but not too much, and enjoy themselves, within reason!”), but the magazine never found an audience, outside of Utah. It mercifully folded after four issues. 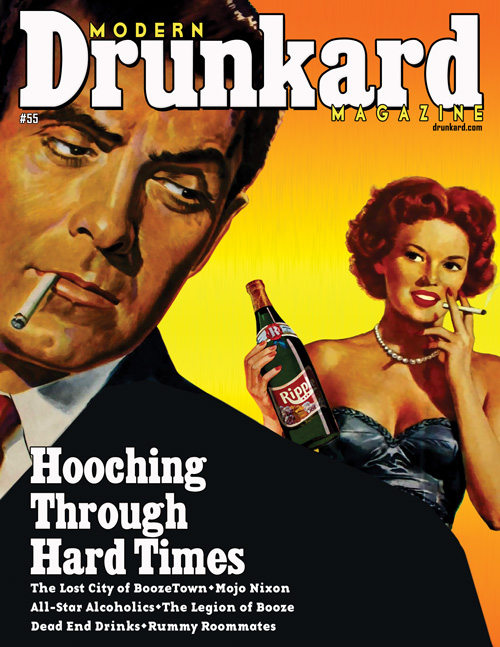 In 1995 Hiram’s great-great grandson , Frank Kelly Rich, successfully sued PPM for ownership of the publication on the grounds that portions of the Berlin Wall still physically stood, technically speaking, and his father had not received a bottle of vodka since it “fell.” Vowing a return to the ideals of his forefathers, he relaunched the magazine in 1996 as a crude ‘zine that has since flowered into the widely-distributed glossy publication it is today.

So what does the future hold for the Drunkard?

“As my great-great grandfather pointed out, it would take a rare and aggressive combination of raving imbecility and national prohibition to screw up this sweet deal,” Rich was recently quoted as saying. “So we should be okay. Right?”