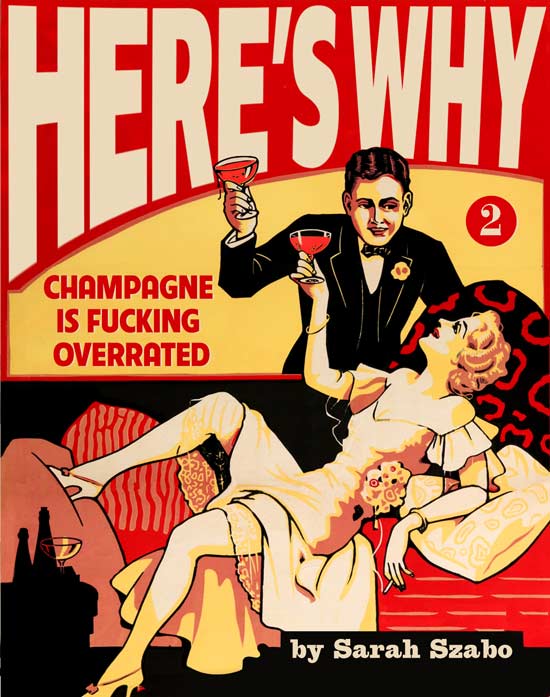 Do me a favor, darling dears—take a shot and kindly clear your mind.

Now tell me quick!—no notes! no thoughts! If you had to choose one type of drink on this bleak earth to kiss goodbye forever and never taste again for the rest of your life… what would you choose? You have the next sentence to decide. What would you choose?

The time is up—and you are wrong. Unless you picked champagne, like me. In which case, you’re my kind of people, friend. Settle down right here with me. Let’s get into why we hate this thing.

Champagne is bullshit in a skinny glass, all spectacle, no substance. The cork pops! and soars through the air! Oooh, aaah! It fizzes, it bubbles, it captivates the eye! It glimmers with status, like citrine quartz in liquid form! For years untold it’s been a staple in many a toast for the classiest nightclub, the ritziest yacht party, the most extravagantly over-budget wedding. It is a drink of celebration. It is a drink of grand tradition. And to this, I say, fuck that.

It tastes like someone took a Sprite into the desert for three days and murdered it, and we’re the schmucks who found the body.

Champagne is the only form of potable booze I’ve ever experienced personally that I’d be perfectly comfortable knowing I could never drink again. I wouldn’t even need a last hurrah. Just look at the stuff. “Hmm, wow, sour air. It tastes like someone took a Sprite into the desert for three days and murdered it, and we’re the schmucks who found the body.”

There are a couple of reasons why I have such utter disdain for champagne, and only a few of them have to do with heady issues of class warfare. Oh, I’ll get there. But let’s start first with the taste of the thing. I don’t care how pretty it looks in a picture—champagne tastes like spoiled soda, watered down with laundromat runoff, with a hint of grapey spit. All of it. Every single kind.

I’m not going to go overboard here by claiming that there’s somehow nothing worse than the introduction of a bottle of champagne to a party setting, but I will call that shit out as being a significant speed bump at any given semi-formal bacchanal—say, New Year’s Eve—and it starts being expected that everybody’s going to have some. “Oh, you got here just in time,” they say to you, in hushed voices, with conspiring smiles. “We’re just about to open the champagne.” And then a wink.

And look, before I paint myself too harshly, I will take the goddamn glass. There’s no ethics when it comes to “free.” But having been around a few too many occasions that went the wrong way just like this, I feel obliged, tonight, to take the entire edifice of champagne drinking and criticize the living hell out of it.

Okay—so we’re havin’ a toast. Robyn’s getting married, Baker bonded out, the Ghost of Thompson won the election. Fat City Lives! There’s a gathering ‘round, anticipations, the camaraderie of the pour-and-pass. Speeches are made and improvised from makeshift pulpits. In a chamber of strangers there comes a blossoming sense of true union, a warm realization of the beauty in us all, and the hope for a happier tomorrow. The energy of the room charges upward to its apex, tears flow freely, everyone screams…  And then, in silent finale, we all tip back barely half a cup of soda water gone rotten, say aaah, and limply burp. Hooray?

Look, there’s a reason we don’t give each other “birthday cotton candy.” Centerpiece celebration treats need substance, need to be more impressive by many degrees than weightless trifles that amount to little more than an overabundance of sugar and air. No, our celebration feasts beg us go big. Take a perfect birthday cake. They are as daunting as they are dense. They are obviously unhealthy, gloriously adorned and dug into with ravenous frenzy.Champagne does not correlate. A wedding cake is like 16 cakes combined, for God’s sake. Where’s the triple shot glass? Where’s the pilsner? Where’s the damn beer boot?

It may not surprise you to know that I believe bourbon should be our classic toast. Nothing heavy, two fingers, something everyone can manage, with room for more for those who want it. The hooray becomes a bellow, and stout shot glasses collide with a force less suited to the silvery sounds of a string quartet and more appropriate beneath the calamitous sounds of Tchaikovsky’s 1812 Overture—you know, the one where the orchestra shoots cannons. And then everybody screams, their throats on fire, and that fleeting kinship of a toast becomes a bond immortal, forged for all time in the iron forge of whiskey and roars.

Now that is how you do a fucking toast! Or should be, anyway. Champagne is weak. I spit at it with all derision.

Of course, it’s not simply the relative daintiness or the lousy taste of the drink that really makes it so deplorable, for the drink is not only annoying, it is inhibiting. Any time spent drinking champagne is time wasted not enjoying something else, and it’s a waste of stomach space. Drinking is a physical activity, and champagne handicaps your game.

For instance, I was out one night with a group of friends, off to see some unremembered nighttime play, and by ill chance we’d reached the venue with nothing more in the back of the Dodge than a heavy magnum of cheap champagne. We took turns chugging it, the four of us, feeling the physical toll of it before the bottle was even half gone. We were burping unpretentiously, swallowing ‘til we could take no more. Christ, we were already late to begin with. It took us forever to finish the thing, but dammit, we needed something in our heads for this. Round and round the car it went, each cycle seeing us more desperate than the last. We felt inflated. We did not feel drunk. After we’d finished the damn thing, we were angling toward a hangover by the end of act one. By act two we felt so spry and clear-headed that we could’ve jumped on stage and subbed in, no problem. What a waste of all our efforts. What a waste of alcohol.

But that’s what champagne is, isn’t it? A wasteful novelty, lacking the crispness of a fragrant white, the boldness of any red, the satisfaction in the belly of a good dark beer. It doesn’t even matter that the alcohol content is comparable to most wines and higher than many beers. Sometimes, that’s not all that matters.

I think we can get a pretty good idea of how the world-at-large really sees champagne when we see its media appearances. Gilded magnums of Cristal and Armand de Brignac, running two hundred dollars a pop at the low, low affordable end, with percentage markups in the thousands if you’re flush enough to flaunt it in a club. Take this as a metaphor—we live in an age where everything down to your damn microwave knows what time it is, yet a watch from Omega can still shamelessly flaunt a price point of a 100k. It’s the same game with champagne. It’s drink sold as an ideal—and the ideal itself is so transparently nothing more than a great big lie.

Take Armand de Brignac. Poorly-reviewed at best, New York wine connoisseur Lyle Fass is on record as saying bluntly that it “tastes like shit.” Rumor has it that they used to sell it under the name of “Antique Gold”, and there was a time before rebranding when you could score that mediocre shit for a measly 60 bucks.*

But stop. Why am I bringing up all this shady business shit (re: the market values of high-end champagne) when I know damn well we’re all more than comfortable getting our fixes from the very back of the bottom shelf?

If nothing else, it’s to ward you off the lie. I’ve made my case against champagne on several levels—it tastes like toe-sweat soda, it costs too much to a grand degree, and the traditions that surround it simply suck—save for a couple I’ve held back ‘til now.

Take the winners’ locker room in an arena, in the minutes following a hard-won championship game. Bottles are popping every which way, spraying sticky fizz in frothy geysers all over everything and everybody. Take the christening of a ship at its launch, commemorated as tradition has dictated for hundreds of years by smashing a champagne bottle to pieces on its bow, for luck.

See, I’ve never claimed that champagne lacks a certain place in society—but that place, my friends, is not in your mouth. Honor tradition. Honor yourself. Scatter that shit across the goddamn floor where it belongs. Throw it out into the ocean.

Then reach for your bourbon. It’s time to celebrate life right.