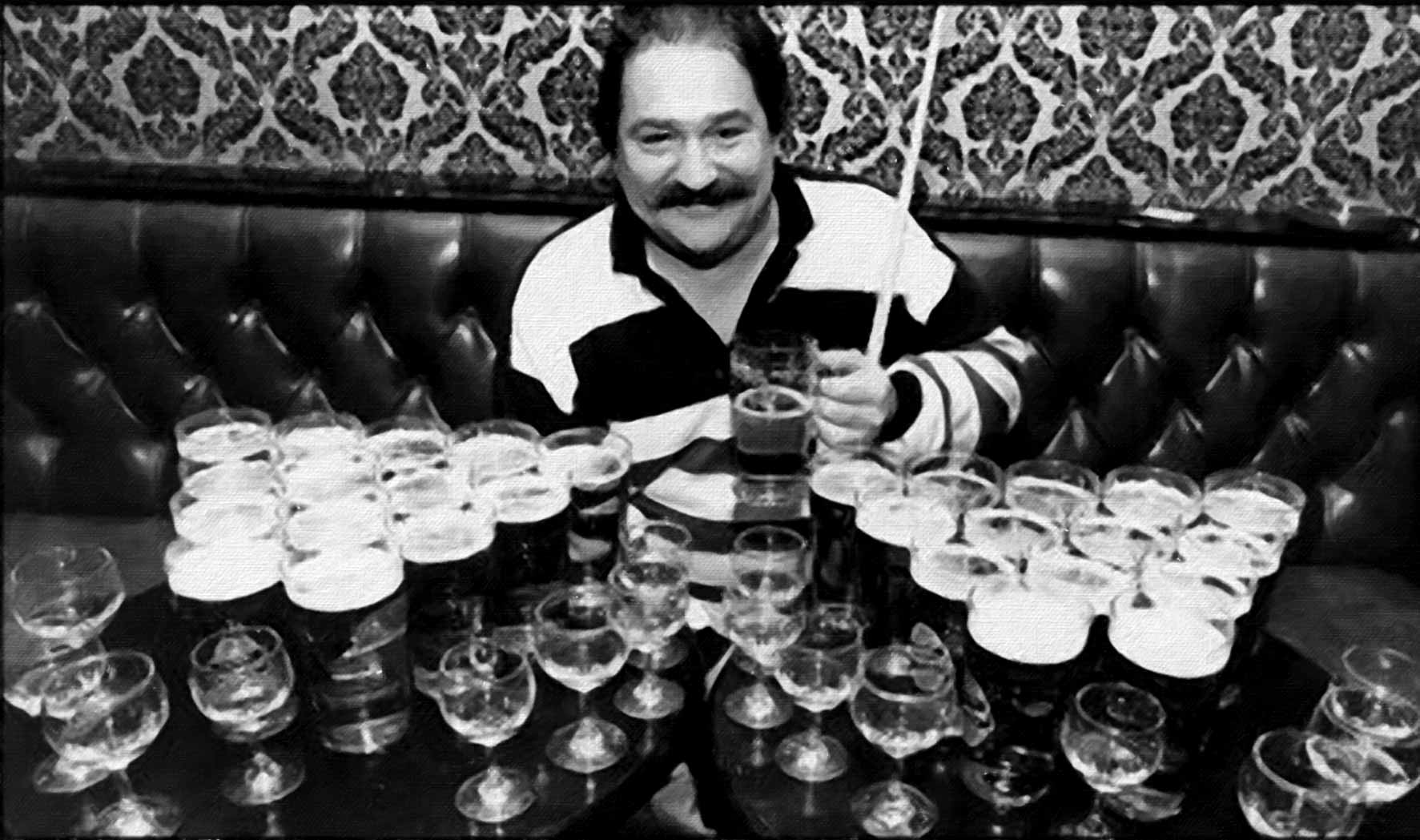 Some men are born great drinkers, others have great drinking ability thrust upon them.

Despite looking like one of Harry Enfield’s scousers with his tight curly hair and moustache, Canadian snooker ace Big Bill Werbeniuk was a great drinker—maybe the greatest.

He’d sup eight pints before he even stepped out with his cue, then continue drinking through the frames. They reckon the amiable Werbeniuk, who weighed in at a hefty 280 pounds, was averaging 30 pints of lager a day at his peak. On a good day he cracked 50.

“I’ve had 24 pints of extra-strong lager and eight double vodkas and I’m still not drunk.”

It may seem incredible to TV audiences now, but back in the ‘80s players used to smoke and drink their way through sessions. So you could virtually tally up how many pints were sitting at a table under the sick yellow light, watching the foam slowly crawling back down the glass after a long sup as a player took a heavy draw on a fag and swept his hair back.

They could get through a couple if their opponent had a big break on, stubbing out the tabs in an ashtray and lighting another with a gold plated Zippo while looking bored. The audience were all smoking too, so a low haze would build up at around eye level. With main sponsors such as Embassy, nobody was going to complain.

Big Bill was such a legendary peever that he was given a medical certificate that allowed him to offset the cost of the booze against income tax as a necessary overhead. With other heavy drinkers, like the legendary Alex “The Hurricane” Higgins, in the sport at the time, the bar bills must have been astronomical. And God forbid if you accidentally got in on a round with them.

Big Bill reached number eight in the snooker world rankings and in 1980 caused an uproar of laughter when he reached over the table to play an awkward shot and split the arse of his pants—putting his hairy backside on show. But Big Bill was unperturbed and joked off the tearing sound by asking who had farted in the audience.

Legend has it that he also literally drank Eddie Sinclair under the table as he sank an absolutely awe-inspiring 42 pints during a match. That’s enough to finish off a whole family of polar bears, never mind a hard-supping Scotsman.

He was expelled from snooker in 1989 after he tried switching from the grog to the beta-blocker Propranolol in an attempt to stop the tremble that he had in his cueing arm from what he reckoned was a (ahem) hereditary nervous disorder and nothing to do with the shakes from necking all that amber nectar. Unfortunately for Bill, it was a banned substance and he was fined and kicked out of the game.

He made a brief comeback but lost 10-1 to Nigel Bond in his last professional match in the preliminary rounds of the 1990 World Championships. He said afterwards: “I’ve had 24 pints of extra-strong lager and eight double vodkas and I’m still not drunk.”

Bill was declared bankrupt a year later and died from heart problems at 56 in the Ridge Meadows Hospital just outside Vancouver after a 12 month illness in 2003.

So next time you fancy a drink in a dimly lit snooker hall, raise a glass to Big Bill Werbeniuk—they just don’t make sports legends like that anymore.