It’s the end of the line.

Gallo didn’t give any reason for ending the ride, but it’s not hard to guess why. The world’s biggest wine-seller, Gallo has the resources to gobble up vineyards in Napa and Sonoma, and now has pretensions to fine-wine greatness. When you’re trying to go upscale, pushing a bottle called Gallo Signature at $40 a pop, having Night Train on your roster isn’t a good look.

Clearly, the winery wishes everyone would just forget the foundations of their early success: Thunderbird, Ripple, and the mighty Night Train. But the Train deserves one last call before Gallo disappears it down the memory hole.

There wouldn’t have been Night Train without Thunderbird. Launched in 1957, “The American Classic” was fortified wine but with “natural” flavors added, taking advantage of a new wrinkle in federal law. Hugely successful, Thunderbird lifted Gallo out of obscurity and up to the top perch of American winemakers.

After Thunderbird’s triumph, Ernest Gallo “became obsessed” with concocting the next flavored wine hit, according to Ellen Hawkes, author of the Gallo family saga Blood & Wine. Most of the early efforts met with disaster.

There was Twister, a peppermint-flavored white port wine inspired by the dance craze that originated at the Peppermint Lounge in New York City. There was Gypsy Rose, Gallo’s clumsy counterattack to the threat of rival Wild Irish Rose. An “oriental wine” called Hai Tori was unwisely introduced in the mid-60s during the Vietnam War. None of them lasted long. 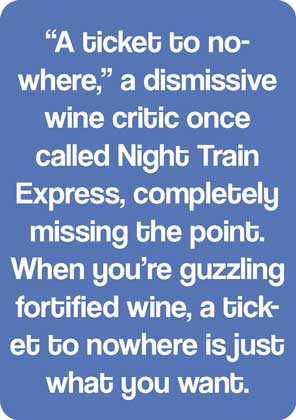 Native Americans were pitched a wine named Cherokee—with an illustration on the labels depicting a chieftain wearing a Sioux headdress. When Gallo salesmen tried peddling Cherokee to members of the Navajo and Hopi Nations, Hawkes reports, they were laughed at.

Ripple was a rare post-Thunderbird success. First of the carbonated, “soda-pop” wines, Ripple was relatively low in alcohol and sold in unique beer-size bottles. Ripple’s biggest (and unpaid) booster turned out to be Redd Foxx, who proclaimed Ripple the “national drink of Watts.”

A variant of Ripple called Pagan Pink also turned into a modest hit. A spinoff of Pagan Pink, a rosé-like wine named Tickled Pink, was quickly pulled. The radio ads for Tickled Pink featured an announcer speaking in an exaggerated black dialect that was considered offensive even for those days.

In 1970, Gallo’s Boone’s Farm had a brief moment of glory as America’s favorite wine. This would eventually seal Ripple’s doom, but it also set Ernest Gallo off on another frenzy of expansion. New brands flew out of the winery in a flurry: Madria Sangria, Country Quencher, Gallo Champagne, new flavors of Boone’s Farm . . . and Night Train Express, the red counterpart to white port-based Thunderbird.

There’s been lots of speculation about the name. Gallo did, undoubtedly, have a penchant for crude and clumsy marketing to ethnic minorities. It could have been a reference to James Brown’s hit song, or to Dick “Night Train” Lane, one of the NFL’s first black stars. It was also a promise: here is a booze that hits like a freight train rolling at top speed.

Something must have clicked. Night Train became an instant hit and picked up the street nickname “Ticket.” It was 19% alcohol (later lowered to 17.5%) and the original labels assured buyers that it contained “natural pure flavors.” It wasn’t advertised and never has been. Gallo had learned by 1970 just how close it could skate to controversy. The Gallo name never appeared on the bottles, instead listing the producer as the non-existent Night Train Limited, Modesto CA.

Cheap price and word-of-mouth were enough to keep Night Train rolling for two decades. It got an unexpected boost from The Blues Brothers in 1980, when Jake proclaimed, “That Night Train’s a mean wine.” Guns N’ Roses were fans too, recording “Nightrain” in 1987. It was a tribute to the bargain booze that sustained them in their early days, scraping by on whatever they could make playing Los Angeles bars and clubs.

But in the late-1980s, Night Train Express underwent a near-death experience from which it never fully recovered.

In the ‘80s the issue of homelessness became prominent, and cheap wine suddenly turned into a national scourge. Night Train always seemed to get named in the news stories and press releases. In 1986, Portland flat-out banned the sale of all fortified wine in certain neighborhoods. In 1989, a pack of busybodies in San Francisco successfully pressured local merchants into pulling cheap wine from their shelves. The Los Angeles County Board of Supervisors asked winemakers to voluntarily withdraw their fortified wines from skid row areas.

Gallo actually complied—and went further, pulling Night Train not just from L.A. County but from cities across the country for a six-month trial period. It was a savvy PR move. “We believe,” a Gallo spokesman said at the time, “that if alcoholics are deprived of one source . . . they will find another regardless of difficulty or cost.” They were betting that this move would prove them right.

Starting in September 1989, Night Train practically disappeared from urban areas. (Thunderbird was pulled too, but it was already on the downslide.) Non-Gallo wines like Wild Irish Rose stayed on the shelves, along with malt liquor, plastic pints of cheap spirits, and every other booze a down-on-his-luck drinker could afford.

The result of this experiment in mini-prohibition was predictable. “The ban has been a complete joke,” one Oregon health official told the Los Angeles Times in February 1990. The New York Times reported that same month on suddenly-booming sales of Olde English 800 and cheap vodka. Even with the menace of Night Train removed, the world went on just like before.

The six-month trial period expired and Night Train hit the streets again. Gallo won its not-very-risky bet and earned a reprieve from the do-gooders. But Night Train got all the wrong type of publicity. The following year, according to the trade journal Market Watch, Night Train moved only 500,000 cases, compared to six million for Wild Irish Rose.

Night Train has been on a downhill track ever since. Gallo now appears content to cede the bum-wine market completely, and discontinued production of Night Train in 2016. Thunderbird barely clings to life and is likely next for the chopping block.

Cruelly, Gallo didn’t even bother to announce Night Train’s departure. It just disappeared from liquor stores. As of this writing, you can still order it online—bottles still linger in the distribution channels—but the price is going up.

“A ticket to nowhere,” a dismissive wine critic once called Night Train Express, completely missing the point. When you’re guzzling fortified wine, a ticket to nowhere is just what you want. This train never failed to deliver the goods, and at a price even the most destitute could afford. It’s a shame to see the Night Train out of service, but at least it’s been a good ride.