The Devil makes quite a few appearances in your music. Does the Devil drink?
If he existed, I’m sure he would. Probably whiskey mixed with human blood.

The usual?
Whiskey. Bushmills on the rocks and I’m in Heaven.

Your most memorable drinking experience. 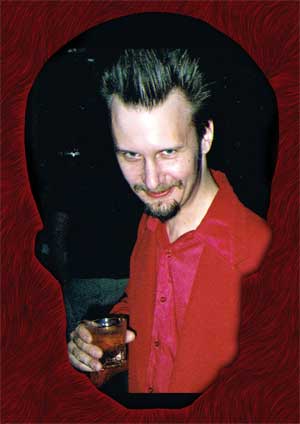 This place called The Shelter in Detroit. We were doing vodka Jell-O shots. We were leaving and a friend of mine picked me up and tried to carry me to the car and I hate being picked up. I kind of resisted a little bit. Next thing you know, I wake up in the back of an ambulance. Then I wake up in Detroit Receiving, the grittiest hospital in downtown Detroit. I’m on a metal gurney with about ten people in the room. One guy was curtained off and he was apparently the victim of a gunshot wound. Another guy asked me who messed me up and I thought maybe I was stabbed or shot or something. The paramedics at first were worried that there was gray matter coming from the back of my head. I did have a slight concussion and a nice chunky wound that took about twelve stitches. This was back in the early 1990s and I was a goth kid and I had the big hair. It was a mess.

What kind of drinks did Scott the goth enjoy?
My biggest concern was that the drink be red.

What kind of drunken animal would you be?
I would choose to be a raccoon. They’re scavengers, they take whatever they can get.

Do you drink on stage?
I can’t perform too drunk and I’ve had some experience with this. If I get too drunk I have two left hands and two right feet. My left foot is kicking the bass pedals, my right hand is soloing, my left hand is playing chords and doing theremin stabs and I’m singing at the same time. It takes a certain amount of coordination. But I do like to be buzzed when I play — a couple of beers, a couple of shots. I’m usually drinking when I write. Being buzzed is my preferred state of being.

What’s a typical drinking evening in L.A. like?
At home, on a Friday night, a case of PBR and a bottle of Bushmills in the freezer. Start about 4 p.m. or so and by about 7 or 8 I have a good buzz going on and I pull out records and start the jams. It’s a good drinking town, but expensive. A Bud Light can be five bucks. That’s why it’s better to have the case of PBR and the Bushmills in the freezer.

Dream bender team:
Charles Bukowski would be real fun to drink with. Tom Waits would be awesome but I heard he doesn’t drink anymore, but that could just be a rumor. Screamin’ Jay Hawkins. He said something in an article about having a “pickled liver” for 50 years. Those three would be an awesome team. They’d probably all get along, too.

Guilty pleasure:
I know a lot of people think they’re frou-frou, but I’m a big fan of Zombies and Skull & Bones. There’s a bar down the street from where I live called Tiki Ti’s. Three of their Zombies will knock you on your ass.