Comic JT Habersaat confronts the status quo like a true punk rocker: with venom, intelligence, a skewed perspective and a stiff drink in his hand. A Relentless purveyor of a bona fide comedy sub-genre, Habersaat curates the Altercation Comedy Festival in Austin every fall. He also headlines the Altercation Punk Comedy Tour that zigzags across the nation every year like a wayward wisecracking boozehead. He hosts a weekly podcast called “The Road” and has been anointed by Chicago Now as “the godfather of punk comedy.”

Remember your first drink? It was in upstate New York and I was 14 years old. My dad had bought the remaining inventory of a closed out Bartles and Jayme’s knock-off brand of “wine coolers.” Cases of this stuff were just sitting in the basement gathering dust. It was some kind of terrible eye-crossing green-hued malt liquor nightmare swill. My buddy was the first one of us to get a driver’s license so we stole a case and went camping. It was really bad but we drank a ton of it and got shitfaced. It gave me the worst hangover of my life … second only to Rumple Minze.

During that same era, my father had a kegerator. In it was a keg of Genny Creme Alea. All you need for a nightmare hangover; but my brother and I would come home from school and stick our faces under the tap regardless. I’m a firm believer that when you’re a kid, it (getting drunk) is by any means necessary.

We robbed a firehouse once because there was beer in the fridge. You gotta do what you gotta do. 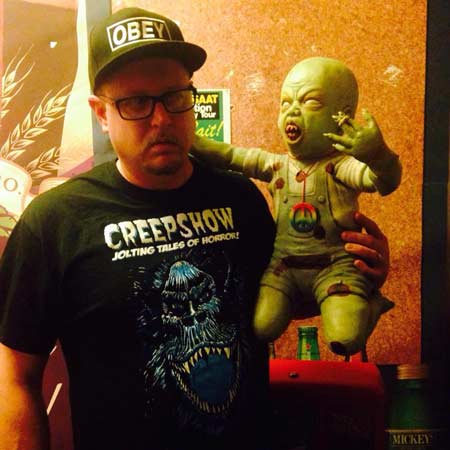 What’s the usual? Evan Williams Black, heavy ice and a splash of ginger beer. The thing about Evan Williams is that they legitimately don’t give a fuck and it’s quality bourbon. I actually tried to get sponsored by them. I sent an email to the Evan Williams distillery with some of my comedy credentials, a few accolades and several samples of some of the ridiculous shit I say. They sent a one-line email reply: “Thank you for your email. We don’t know what this is.”

What’s your favorite drinking setting? Honestly, at home, because I control the guest list and I get to choose the playlist.

What’s on the playlist? Nick Cave and the Bad Seeds, Lydia Lunch, Tom Waits, Iggy and the Stooges, The Melvins and Lead Belly. Gin and Lead Belly in the summer is the best.

Gimme an epic drinking story. I was 26 and used to run around the Lower East Side of NYC with a buddy of mine named Big Bri every weekend. A new IMAX theater had just opened not far from St. Mark’s Place, so we went to see the original Resident Evil flick on a screen the size of a building, splitting a bottle of vodka between us in movie theater sprite cups. Fleischmann’s or something similarly brutal and economic.

We get out of the movie around 4pm completely vodka-trashed, stumble into a pizza place and order Long Island Ice Teas. Drinks in New York still came in pint glasses then, and we ordered a meat lover’s deep dish because—why not? Fast forward two slices and a matching duo of L.I.’s and my bowels start kicking. I flee our table for the men’s room, barely making it into the stall in time.

Finish business and grab the toilet paper roll, which, like some scene in a fucking movie, snaps one square in my hand and rolls under the bathroom stall door and out of sight.

The Long Islands are doing their job, and bravery is in no short supply. So I kick open the stall door, crane my neck out, see that the coast is clear, proceed to drunken crab walk (pants to my ankles) out of the stall and towards the paper roll.

Cue opening of the main door. Old guy walks in, takes stock of the scene, yells “Nope not today!” and leaves. I grab the toilet paper, clean up, finish the pizza and order more Long Islands. We eventually went to CBGB to see the Murder City Devils, and started drinking rum in anticipation of their song “Rum To Whiskey”. The show is absolute drunken madness, and at one point I slam into a well-known comedian from Mr. Show in the pit, who is yelling “I’m on acid!” to everyone around. The Devils finally play “Rum To Whiskey,” set their drums on fire with 151, and singe my fucking eyebrows. I haven’t had a Long Island since.

How about another? It was the first time I went on Spring break –I was 17. I went to the Bahamas. My buddy Chris had never gotten drunk before and all they serve out there is Bacardi—everything is rum-based. At the end of the night we took a taxi home and all of a sudden Chris says, ”My hand feels weird.” We look at the door and his hand is jammed in it, with his fingers outside tapping on the window. We pull over and open the door and there it is—a mangled claw hand. I put him to rest on the top bunk that night but just before he passed out he puked down on all of my stuff.

Any recent episodes of terrible behavior? Actually, I am a very good drunk. I can drink a lot and not lose my shit. I can drink for a long time without ever getting into the “What are you looking at?” aggro-guy mindset. Although, probably my worst regrettable behavior is that I have punched people out at shows—you know, fucking asshole loudmouth frat guys.

Where would the team go? We would hit the town old-school downtown-Vegas style—by the Plaza where all the Rat Pack shit went down—in the Fremont district. Because it’s classy and nothing ever closes.

As a performer, do you prefer a drunk crowd? I do like a drunk crowd as long as they shut the fuck up. There’s the drunk crowd where you can have fun with them and the energy is loud and wild but they don’t try and talk to you, ya know?

That’s an oxymoron, isn’t it? A drunk crowd that shuts up? Yeah, but they are out there. I’m talking about the drunk crowd that’s like lassoing a shark—I dig the challenge of trying to thread that needle. Kind of like bikers. If you don’t fuck with them and push them a little bit, they don’t respect you. But, if you push too far then you’re insulting and disrespecting them. It’s a very fine line. 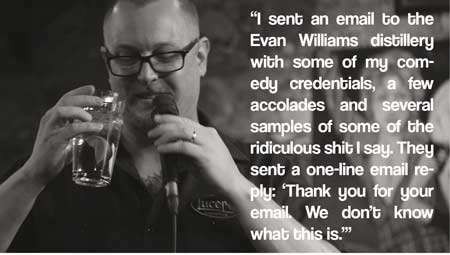 Do you have a pre-show ritual? My ideal night is to have two stiff drinks before a show doing what my wife calls “The Panther Stalk.” Then when I’m onstage I’ll always have a drink in hand. There’s a sweet spot of a couple drinks to loosen up—once again—the fine line. If I’m too drunk I can’t fire as fast as I want to because I have a fast delivery. I’m from New York, man—fast paced. I was very much into the Ramones, The Stooges and Black Flag before I got into comedy. It’s like—get up there, destroy, get off the stage. That’s how I approach it. Which doesn’t mean I try and do short sets. I’ll still do 45 minutes to an hour if I’m headlining. People are often surprised at my comedic style because I’m not that zany, odd guy offstage—I’m rather unassuming and kind of quiet. I don’t have to always be the center of attention because I hate that shit in a comedian. But when I’m onstage, I’m like … get the fuck out of my way. I’ll help you change a tire before or after the show, but when I’m onstage don’t fuck with me. That’s “go time,” it’s an amplified version of who you really are. It definitely comes from being from New York. The mindset of go, go, go.

What’s the mark of a bad bartender? Ignoring the person who is polite and obviously thirsty —unless they’re not tipping. Nothing gets me more angry than if I’ve been tipping you all night and I can’t get the time of day, much less another drink.

What makes a good bartender? A good pour. I hate measured-out shots. I think that’s insulting unless you’re bound to it by the job. But, if you’re working in a place like this (the Lion’s Lair) then c’mon, man, pour me a heavy-handed fucking drink and I will happily tip you. A bartender who can tell a good story is always nice, but I don’t subscribe to the idea that your bartender has to be your fucking therapist.

What’s your drinking philosophy? I think not everyone is good at drinking and if you’re not good at it you shouldn’t do it. But, if you are good at it, it is one of the things that absolutely makes life worth living. Which sounds like the most alcoholic statement in the world, but not if you can handle your business and drink and enjoy it. Then, everyone with their opinion can fuck off. Because drunks get slapped with this cliche of “They lose their job, their wife leaves them because they are a loser or they are not ambitious, they have no work ethic,” right? I’ll take that Pepsi challenge. I decided a long time ago that the only (drinking) criticism I am really going to take to heart is from other comedians who do more road dates than I do each year. I’m not the funniest comic, but I will outwork the fuck out of you and I will out-drink you. Basically, my ultimate philosophy is: drink as much as you want, but handle your business. When you get to be an embarrassment or the guy who’s starting fights, or the guy who’s losing his job and not paying his bills, then you’re an asshole and you’re making the rest of us look bad.

How much is too much? For me or for general people?

For you. I don’t like to mix up shots. My worst hangover is beer with shots, and the only time I do that is with people I haven’t seen in a long time. I like to pick what I’m drinking for the night and stick with it. I don’t like to cross the streams—that’s an amateur move. The only reason for switching (types of booze) is if you run out.

Get more of JT at: jtcomedy.com