If you’re a man aged anywhere from 21 to 35, I’ve got some sobering news for you. Your Grandmother is a better drinker than you are.

Let me be more specific, your Grandmother is a manlier drinker than you are. Now, I’m not talking quantity, (I don’t think she’ll be beating you at a keg stand anytime soon) I’m talking about quality. I’m talking about the fact that she probably drinks bourbon or gin while you’re drinking a vodka and cranberry. Let’s face it, when it comes to drinking like men, our generation is a disgrace.

But there is hope. The cocktail is currently enjoying a renaissance. The sun has set on the era of the wine cooler and the decade of peach schnapps. Real drinks are back. This is our golden opportunity to pick up the torch we dropped and learn to drink like men, so that one day we might pass that knowledge to our sons.

But if we are to carry on the tradition of masculine drinking, we will need guidance. To that end, a widely read publication recently printed a list of “Ten Manly Drinks.” It spoke with authority on what you could proudly hold in your hand in public. A noble goal to be sure, but one that the list fell short of. Sure, the Manhattan was there, and the Martini, but so was the Sidecar.

Really? The Sidecar? Sure it’s a classic cocktail and it tastes great, but most bars serve it with a sugarcoated rim. It’s a close cousin to the Lemon Drop, for God’s sake. I knew then that it was time for a real man to step forward to properly instruct the masses on the finer points of manly drinks. And until that man is found, I will do my best in his place.

You see, I’m not a manly drinker. But I aspire to be one. I want to drink like my father drank. And like his father before him. I want to proudly shout my order to the bartender and see the nods of respect out of the corner of my eye. I want to trade my straw for a swizzle and my pink vodka slurry for something brown and congener-laced. But it won’t be easy.

I have a confession to make. I don’t love the taste of booze. I know that some of you will now scoff and turn the page, but I know that there are others like me, and that they will keep reading. Together we can find a way to drink like men. 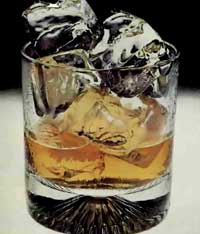 I know that I am not alone because the American palate has changed. We have turned away from gin and bourbon and embraced vodka, the safe, colorless, tasteless friend of the amateur drinker. But we are not fulfilled. We drink a Sour Appletini with shame as the man next to us polishes off a scotch. We pray that the bartender won’t garnish our glass with an orange slice while the girls are watching. We look across the sea of bottles behind the bar and wonder “What will taste good and not leave me emasculated?” Join with me then, as we put down the hooter shooter and go in search of a manly drink.

First, we must define our terms. What exactly is a manly drink? The definition is situation and location dependent. Think a martini is always manly? Try ordering one in a blue collar Rust Belt bar. See what kind of looks you get from the locals. The hard truth is that in some establishments, the only thing a man drinks is a shot or a beer. Or both in quick succession. So yes, you can always look like a man if you drink a beer, but a bottle of suds will never have the gentlemanly charm of a Manhattan.

So let’s assume that you’re in bar where you can drink from stemware and still be a man. What now? Well, our definition still needs work. After all, there are two groups that you want to look like a man in front of, and they don’t have the same conceptions. I’m speaking of course of men and women. Think about it this way, a woman might be excited by a sports car with smooth European styling and not give a damn what’s under the hood. But a man will give more respect when you rev up an old Dodge Charger with two primered doors and a quarter panel missing. He respects that big block V8. So, by the same token, there are drinks that a woman thinks are manly, and those that will give you standing among other men, and they only partly overlap.

The first factor is the drink’s appearance. Color and container. This will determine how your drink looks from across the room. A rocks glass looks great. So can a martini glass. But unless you’re in a Tiki bar, you don’t want to be the guy drinking out of a novelty glass with a kooky straw. And the color of your drink is perhaps even more important. There are really only two acceptable colors. Clear and brown. Clear could be vodka or gin. Brown could be bourbon or whiskey. Green and blue are probably colors you don’t want to run up the flagpole. Here’s a simple little rhyme that may help: If it’s brown, suck it down, if it’s pink, don’t you drink.

The second factor to take into consideration is the drink’s name. Because inevitably, someone is going to hear you order it, even if it’s just the bartender. I don’t care if your drink is a mixture of bourbon, bitters and Tabasco sauce; if it’s called a Fuzzy Slipper it’s not manly and you don’t want to order it. You want a tough, classic, simple name. A Bronx. A Rusty Nail. A Boiler Maker. But just remember to steer clear of novelty names that are associated with frat boy drinks. A Scud Missile might sound tough, but it also sounds like you do your drinking at a place with a lot of crazy crap on the wall and waiters that wear striped shirts. Sure, it will get you messed up (it’s Bacardi 151 and cinnamon schnapps for any curious frat boys out there) but so will huffing paint. A name shouldn’t be too trendy, clever, or have sex references in it. It’s a cocktail, not a punch line.

So we know what we’re trying to avoid, now let’s put it into practice with an example. You’re out at a bar and your girlfriend is drinking a Cosmopolitan. You sneak a sip and it tastes pretty good. You contemplate having her stealthily order one on your behalf, but then you’d still have that pink martini glass to deal with. Thinking on your feet, you step up to the bar prepared to order a Kamikaze. After all, it’s just like a Cosmo without the splash of cranberry to pinkify it. But just before the word escapes your lips you realize you’ll sound like a frat boy. They might even ask for your ID (which your little brother happens to be “borrowing” at the moment). Just as the bartender is about to give you the hairy eyeball (which isn’t a drink, but should be) you say, “I’ll have a vodka and triple sec. Rocks. And can I get a lime with that?” You’ve just ordered a basic version of a Kamikaze (the only difference is that most bars would put Rose’s lime juice in a Kamikaze so yours will be a bit drier). It’ll taste pretty similar to a Cosmo, be served in a rocks glass and looks just like a gin and tonic or any other such clear drink. What’s more, you asked for something simple and specific, which makes you look like a man who knows how to drink. Granted, the triple sec is not the most manly of ingredients, but you’re still a lot better off than you were ordering a Cosmo or Kamikaze.

The previous example leads me to one final point — the special order. To have a manly drink that agrees with your palate, you may have to create it yourself. This is actually a good thing, as long as you do it right. For example, you ask the bartender, “Have you got any rye whiskey?” He says, “We’ve got Jim Beam Rye.” You answer “Great, I’ll have a rye and Coke.” Now you’ve got something the right color and in the right glass, but you just basically ordered a Jim Beam and Coke. Brother to the Jack and Coke. Cousin to the rum and Coke, favored drink of teen boys nationwide. But you’ll probably get away with still looking like a man. Why? Because you asked about rye whiskey. Something only real men drink. And that’s what will stick in their minds.

Even better is to ask for a specific brand of liquor. After all, our parents and grandparents didn’t just drink their drink, they drank it with their brand. For my mom, it was (and still is) a Dewars and water. For my grandfather it was an Old Crow and soda. But don’t let it all go wrong. Take this exchange for example: a soon to be shunned fellow yells “Can I get an Electric Razzle Frazzle?” After getting a blank stare from the barkeep he decides to teach him a little something. “It’s Sour Puss raspberry liqueur with root beer schnapps and a float of cream.”

Now, there are a lot of things that went wrong there, but let’s just hit the highlights. (To save time, we’ll ignore the spurious contents of this hopefully fictional drink). Don’t order a drink that you’re pretty sure the bartender has never heard of, especially if there is anyone one else waiting for a drink. (Not to mention that it’s probably a made-up drink that you got off of some chain restaurant’s table placard). And chances are, the bartender doesn’t care what it’s called anyway. Just tell him or her how to make it. And keep it simple. I’ll have an X with Y please (and maybe a dash of Z). The special order. Use it right and you’re the drinking man you’ve always aspired to be. Use it wrong and become the bane of every bartender’s existence.

Now that I’ve cautioned you on all the things that can go wrong, get out there and do something right. Drink. Keep drinking. Make it your goal to find that one drink that fits you like a glove. And, uh, makes you look like a man that doesn’t wear gloves. As for me, I’m still looking. Still looking for the drink with the right color, container, contents and character to set me apart as a real drinking man. I started with the Black Russian. Decent sounding name, good color and glass, but too sweet — even for me. I’ve moved on to Meyer’s rum and ginger ale (a poor man’s Dark ‘n Stormy, since most bars don’t stock ginger beer or Gosling’s Black Seal). It still has the shame of a sweet soda in it, but I’m getting closer.

Some day, maybe I’ll finally cultivate a taste for the Manhattan. And if all else fails, give me a beer. A domestic macrobrew straight-up, no chaser, please.