The driving force behind Ryan Chrys & the Rough Cuts blazes a trail from stage to stage with a double-fisted approach to drinking and music that has earned him numerous awards from the Colorado Country Music Hall of Fame.

Tell us about your first drink.
Poured and mixed by my older brother. My mom was out of town, and he got my cousin and I drunk for the first time on vodka and grape Kool-Aid. We were soon running around the yard in circles in our underwear. I ended up puking in the living room and I recall trying to catch my vomit so it wouldn’t ruin the carpet. Since that didn’t work, I just decided to play with it for a while and mash it around into the floor. To this very day, we still have the same carpet, the stain is still there, and my mom has no idea what it’s from.

That’s a telling metaphor of your future as a songwriter, don’t you think? The idea of purging something from within, manually rearranging it and then not showing your mother.
Yeah, I suppose it is. I never really thought about it that way.

What’s the usual and why?
For a long time, it was Jim Beam and 7 but lately it’s been Coors Light and Espolon Silver. I still drink Beam from time to time, but I definitely can’t ever drink vodka—or grape Kool-Aid for that matter. 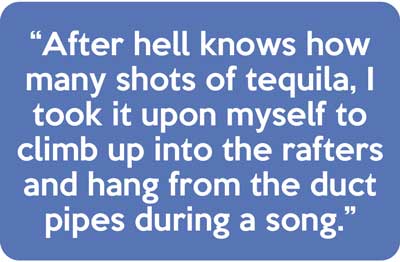 Can you share a couple of epic drinking stories?
I’ve played every room and outdoor stage in town and beyond, but the Lion’s Lair is still one of my favorites. Unfortunately, while playing a gig half in the bag one time, I got 86’d for falling off the bar top into the service well behind the bar. I was just waltzing along playing a guitar solo and I lost my footing and crashed into a row of well booze bottles. I think I smashed like 10 or 12 of them and gashed the fuck out of my leg. The bartender cut the power to the stage and kicked us all out on the spot. So, there I was, sitting out on Colfax with a badly gashed leg trying not to bleed out.

Here’s another one: Recently in Sedona, AZ—it was a two-gig day on tour—we played a festival in the afternoon, and I booked a club gig that night just to double up on the money. They had a bunch of beers ready for us when we got there, the place was packed and rowdy and booze was flying everywhere. After hell knows how many shots of tequila, I took it upon myself to climb up into the rafters and hang from the duct pipes during a song. I survived the climbing stunt unscathed, but at the end of the gig, at the very last note, as people were throwing money and spraying beer everywhere, I took off my guitar and threw it at the drum set (while the drummer was still playing) and then just staggered out the back door of the bar. Michael Jochum (drummer) had this brand new $4,000 top-of-the-line custom DW kit. I had a drunken epiphany that it was far too nice, and it needed some character, some battle scars—it needed to be christened. I managed to knock over the kit, fuck up my guitar and scratch the drums in a couple places. Surprisingly, he didn’t punch me in the nose, but he had every right to, and I would have taken it. But, after healing time has passed, that drunken epiphany moment was worth it because now there’s mojo in that drum kit and in my guitar.

How would the night go?
It would be Belushi on harmonica, Keith Moon on drums, Hank Williams on guitar, Bonn Scott on bagpipes, and Susan on bass. We would play an evening of the baddest blues music ever that was somehow able to incorporate a bagpipe player.

Mark of a good bartender?
I like a bartender who, even if they are in the weeds, can at least make quick eye contact with you. That acknowledgment lets you know that they know you’re there, and they’ll get to you as soon as they can. I also like a bartender you can do a shot with you from time to time. Nothing crazy, but when the occasion calls for it.

What’s your drinking philosophy?
When I was in high school, our battle cry was: “Drunken is the end, the middle, and the beginning.” My friends and I appropriated a chant from that Metallica song “Blackened” that goes “blackened is the end.” We would yell “Drunken is the end!” to one another all the time. Another slogan we had was “Two-fisted to the end.” At parties we would yell it out all night at odd times and if you weren’t two-fisted to the end, fuck you, man.

Do you have a pre-show drinking ritual?
We typically have a rider that provides me with plenty of cold Coors Light and a bottle of Espolon Silver tequila and/or a bottle of fine whiskey. I try to pace myself at the get-go, but as long as there is a bottle of beer perched on my amp while we are playing, I feel that all is well, and everything is going to turn out just fine.

How about after a show?
I have a habit of slamming all the booze around me towards the end of a show—once we are, like, three-fourths of the way through the set. I go for any beers that are lined up, any shots that have been brought to the stage—all of it. Then the knives come out, booze gets thrown and it turns into a glorious shitshow that can become horrific when it’s time to load out.

Do your fans always bring up shots to the stage?
Not always but beers are guaranteed. Beers and knives.

What do you mean by “beers and knives?”
Well, a while ago I began the mid-show practice of taking out my pocketknife and whipping it down so it would stick into the stage. The images and videos became popular on social media and at one point, people just started coming up and sticking their knives into the stage, leaving them there for a second, taking them back, and walking away while we played. Then, at one point, we met this veteran in Sturgis, SD named Jim Riley (Black Elk Knives) who gave us all knives he had made. At one point he sent us three cases of knives. Thus, the title of our new album, “Tears and Blades.”

Any parting thoughts?
Booze is my bitch, and she’s all mine.