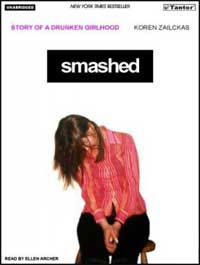 I was sold on the title alone: Smashed, a term that brings warmth to the heart of a drunkard. In this “story of a drunken girlhood,” Koren Zailckas recalls her stint as a booze-infused college student and aspiring writer. Happy days, many of them. Zailckas reflects upon some of the positive effects of alcohol swooshing about the system:

When I talk to Tess thoughts diffuse through me without any of the hesitation that so often trips me up. I speak without rehearsing the words in my head beforehand, and she listens, clapping her hands and agreeing with her whole heart. When I laugh, the hum of my own happiness is astonishing.

Indeed. Alcohol stimulates the brain and nerves, allowing for improvised speech where none soberly existed. This is well enough documented by science but I never tire of reading anecdotes celebrating the fact in more personal detail. The fond memories of drink documented in Smashed continue as Zailckas describes a vacation she took to the Cayman Islands with her parents. She gushes, “One afternoon, I bump into a boy from my dorm on a bleached stretch of beach. We spend a night at a sports bar called Bobo’s Iguana, drinking Red Stripes and flirting shamelessly.” End paragraph. Did she eventually get lucky or not? We never find out.

The good times keep rolling as Zailckas and a friend take revenge upon a couple of crass frat boys by looting their houses: “We feel it’s our job to steal back everything that has been confiscated from us,” explains Zailckas. “It is an act of revolt against an invincible adversary.” This impressive feat most likely would never have been attempted, much less accomplished, without the stirring influences of several vodka tonics. Score one for the booze.

There are many other fine insights brought to light in this memoir, such as, “A first date will feel too stiff without a drink at the table.” Here! Here!

Unfortunately, the narrative starts to suffer when one slowly begins to realize the book is not intended as a celebration of drink after all, but rather a preachy, prohibitionist-style assault on the stuff that makes us so happy. When Zailckas accurately writes, “Moderation is idiocy perpetuated by the alcohol industry, which bombards us with warnings about ‘drinking responsibly,’” she is apparently not attempting to second my theories on the merits of extreme and heavy drinking. No, her message is quite the opposite: she’s advocating complete abstention! Zailckas shambles on from there to commit the schoolmarm fallacy of telling us all to stop drinking since she herself couldn’t handle the ride and was forced to stop.

What’s her argument? It’s hard to say. In one section, Zailckas feigns surprise and outrage that college kids schedule their classes around partying priorities. Aside from the fact that this is already common knowledge and therefore not worth mentioning as part of an attempted expose on the Evils of Drinking, no actual argument is presented that explains why anyone should believe this to be a bad thing. College has long been an institution for young people to explore alcohol and many other aspects of life along with education. I say if students can find time to both party and study, then more power to them for making the most of the adventure.

Where does one even begin? First of all, I insulted far more than a mere 29 percent of all my classmates, so the legitimacy of that poll is instantly in doubt. Second, what is wrong with looking after a friend who has had too many? It teaches valuable empathy skills. And only 50 percent have done so? Jesus Christ — that is cause for concern. Wouldn’t you hope and expect someone to do the same for you if you’re sick, injured or hungover? As far as being “interrupted,” well, that’s just too fucking bad. Welcome to the real world, kids. Learn to adapt, for crissakes. When I was a freshman, I bought a high-powered fan to drown the bastards out whenever I needed to get some solid sack time. Zailckas, on the other hand, imagines a world governed by politically correct crybabies. Does she seriously mean to cite this survey as reason for a supposed need to ban alcohol from campuses?

The quality of writing matches the quality of ideas. Readers are inflicted with the sort of bilge only a sober nitwit would commit to page: “I feel like a fluttering spark like the moment a moth collides with a bug-zapper” and “Her syllables, thick with breath, swell like rainwater in the street.” I won’t embarrass Zailckas further by reproducing anymore of the laughably earnest similes she cluttered Smashed with, in an obvious effort to appear literary.

Toward the end, Zailckas resorts to wild ranting and the proverbial wheels come flying off with alarming velocity. In the midst of one of her incoherent, anti-alcohol screeds, she slams booze for making us “think it would take us away from small towns, stressful studies, tedious jobs, or unproductive relationships” without having the foresight to appreciate that alcohol often does give us the verve to move beyond such mundane circumstances. It has certainly helped me leave behind those things. Thoughts breed action and booze conjures rebellious thought. But Zailckas isn’t interested in thought, as she herself admits in the last sentence of a chapter: “I’ve never been one to mind not having a mind of my own.”

And that’s the most obvious explanation for her entire, sad story. The problem is not alcohol; it is Koren Zailckas, the born-again lecturer: “Over the course of writing this book,” says the sage, “I’ve learned that if any of us, girls and women, want true strength born of stability, we need to find a more productive outlet.” Whatever happened to the liberal idea of letting people experience, learn and think things for themselves? I’ll concede that some people who cannot control themselves, like Zailckas, and are just too stupid to know any better, should probably not drink, but why insist upon ruining the fun for the rest of us?

As a writer, Zailckas is self-obsessed with an eye for irrelevant details. If this is an autobiography, it’s not one anyone will ever care to read. Except for the moments that explain the euphoria of alcohol consumption, it’s an entirely useless piece of bile served up for parents and other tight-asses already hellbent on banishing booze from our world anyway.

Smashed is not so much a book as it is a boring diary from a mediocre writer who was damned lucky to get a publishing deal in the first place.

The Hell You Say: Brutally Honest Reviews of All Things Boozed