First drink:
My mom used to dip my pacifier in Old Granddad to get me to stop crying. I think this happened when I was about 22 or 23. 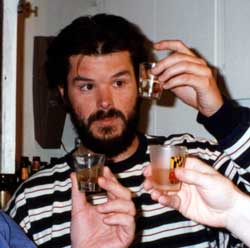 The usual:
It changes with the seasons. In the summer I like clear spirits, then, as the leaves turn to gold, my liquor turns to brown. See, I’m like some kind of goddamn poet when it comes to drinking. Specifically, I’m very fond of something called a Stroke. It’s made with a 160 proof Austrian vanilla/butterscotch-flavored rum and Coke. It kicks like a mule that’s rumored to be homosexual. Not that there’s anything wrong with homosexual mules.

Drunkest ever:
St. Patty’s Day in Savannah, GA, mid-80s. Though I disdain St. Patty’s and New Years Eve as amateur nights, I managed to live on vodka and raw oysters for four days while bar hopping on a broken leg. I didn’t realize it was broken at the time, but I did later.

Bender Dream Team:
I’d drink bourbon with Tom Waits (circa Nighthawks at the Diner) absinthe with Van Gogh, port with Cassady and Kerouac, and some pints of lager with Keith Moon. And Jagermeister with Hunter Thompson. Oh, and let’s not forget delightfully refreshing wine spritzers with figure-skating analyst Dick Buttons.

A bar worth drinking in:
A place with Coltrane, Merle Haggard and the Damned on the jukebox, a pinball machine that won’t tilt, and generous pours of Maker’s Mark. Since that place only exists in my dreams, in Denver I prefer the RooBar, Squire Lounge, the Stadium Inn at 8 a.m. and, for a little variety, the Paper Tiger.

What makes a good bartender great:
The ability to read my mind. One who won’t judge me on the basis of my missing testicle. 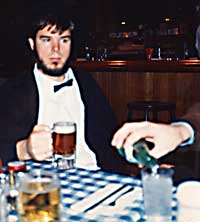 You got twenty bucks:
Two bottles of Everclear and a bottle of Liquid Smoke. That combination is called a Black Angus, and it was invented by my pal The Crayfish. If you need training wheels, you can bite into a wedge of medium-rare sirloin burger.

Sure-fire hangover cure:
Hair of the dog. If it’s really bad, I’ll steal a dumptruck and drive it around a little. Morphine suppositories are also effective.

Why we must drink:
Because I don’t like going home with money in my pocket. When I wake up in the afternoon and find big wads of cash in my pants, man, I just want to beat the hell out of myself. I mean, really.