Eight uniformed policemen storm into the bar, shoving their way past the startled owner. A dozen of the bar’s patrons, chosen at random, are pulled off their bar stools and marched outside where they are forced to take Breathalyzer tests and recite the alphabet. Those that appear drunk, or perhaps just illiterate, are cuffed and hauled off to jail for public intoxication.

I got news for you, pal. That ugly scenario didn’t take place in some foreign tyranny, and it wasn’t dreamt up by a manic-depressive novelist. It happened right here, right now, in freaking America.

In Fairfax, VA to be precise. The police there have decided that getting drunk in a bar is an arrestable offense worth enforcing. You don’t have to be starting trouble, getting in a fight, or climbing behind a wheel — the simple act of drinking in a bar gives them enough probable cause to harass and subject you to tests. And if you actually have the gall to have more than a couple beers while in that bar, you’re going to jail and getting fixed up with a nice criminal record. 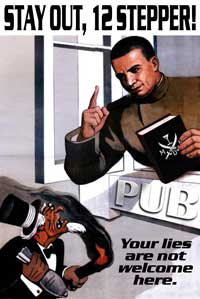 “They drew attention to themselves by their actions,” Lt. Tor Bennett,assistant commander of the Reston District station, would later swear in an attempt to justify the raids. But since even stone-sober designated drivers were interrogated and tested, the actions he’s talking about apparently consist of stepping inside a business that sells liquor. Or singing karaoke. One of the dozen patrons arrested during the sweep says his only crime was wearing a Santa suit, having a couple beers and singing “Jingle Bell Rock” into a karaoke machine. The instant he hit the last note a cop took him to outside and moments later he was taking a sleigh ride to the slammer. And you have to ask yourself, If they’re willing to arrest goddamn Santa Claus for belting out a Xmas song with a beer in his hand, what chance do us regular drunks stand?

“We’re not talking about overzealousness here,” Bennett added, then, rather strangely, added that the uniformed policemen raiding the bars were accompanied by members of the police bicycle patrol clad in nylon pants and polo shirts. The only reason he would throw in that odd fact, it seems to me, is to somehow lend the impression that proper fascists eager to trample on basic rights would never dream of wearing bicycle shorts and polo shirts.

By now you’re probably wondering, “Why? Why the hell would they do this? How do they profit by arresting some guy having an after work beer in his local watering hole, minding his own business?”

My theory is the police chief went out and watched the Steven Spielberg film Minority Report and thought, “Hey, if futuristic cop Tom Cruise can use a trio of all-seeing mutant psychics to justify arresting people before they actually commit a crime, why the hell can’t we?”

The only problem is, the Fairfax PD doesn’t have three all-seeing mutant psychics on their payroll. The don’t even have one. So instead they decided to take a broader approach, arresting drinkers who they had a hunch might commit a crime. You know, the same principle as arresting poor people for being poor, because they’re most likely to steal things.

To be fair, the Fairfax PD didn’t just start sending out arrest teams to bars at random, they did a little investigating first. They infiltrated undercover cops and Alcohol Beverage Control agents into thirty or so bars during the holidays, searching for patrons who were having a little too good of a time. During the holidays.

Sure enough, these spies returned to the precinct with strange and terrible stories to tell: yes, these bar denizens were drinking more than a couple beers in a sitting. What’s more, they sometimes slurred their words, walked with strange, nearly inhuman gaits, and sometimes they would even laugh like lunatics at jokes a right-thinking sober citizen wouldn’t waste a grimace on. Alerted to this obviously deviant behavior, the chief decided he had but one responsible course of action: It was high time to crush those goddamn drunkards’ groove.

Unsurprisingly, a firestorm of controversy erupted in the conservative press in the aftermath of the raids. What is surprising is that the Fairfax PD refused to apologize for their stormtrooper tactics. The chief considered the raids a great success, and bragged they would do it again, and soon.

“The enforcement of such laws is to clearly send a message to the community that we will not tolerate illegal use of alcohol,” the Fairfax PD’s statement to the press explained. 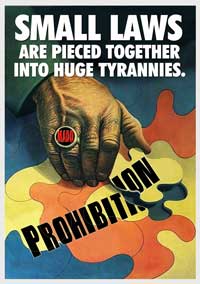 But what exactly is illegal use of alcohol? During the raids the policemen used a BAC standard of .08 as grounds for arrest. The thing is, .08 is the level at which it is illegal to drive a motor vehicle, not sit on a barstool. Virginia law doesn’t specify what level of blood alcohol constitutes public drunkenness. Virginia Code 18.2-388, which covers “Profane swearing and intoxication in public,” makes no mention of BAC at all. Rather, it states: “If any person profanely curses or swears or is intoxicated in public, whether such intoxication results from alcohol, narcotic drug or other intoxicant or drug of whatever nature, he shall be deemed guilty of a Class 4 misdemeanor.”

So, theoretically, they can lock you up after one beer. There is no word yet if the Fairfax PD will next crack down on those scofflaws who like to curse in public.

“You could be anybody, anywhere,” says one of the bar patrons swept up in the raids, “and they can take you out and throw you in jail. I didn’t do anything other than to be in the wrong place at the wrong time.”

And that place and time appears to be in a bar while it’s open for business.

“Good thing we have the ACLU on our side,” you’re probably thinking. “I mean, if they’re willing to defend Nazis and child molesters, surely they will leap to the defense of we oppressed drunks.”

For Fairfax is not an isolated incident. Reacting to the Princeton Review’s labeling Indiana University America’s top party school, campus police recently initiated a bellicose new program of arresting students for walking home drunk, even if they were steps away from the door of their dorms.

When confronted with possibility that the crackdown on walkers is likely to encourage drunk students to drive home from parties, Indiana University PD Lt. Jerry Minger stated, and I’m not making this up: “Alcohol abuse is the problem, not the issue of whether or not you are going to drive.”

It’s funny. Civil libertarians have recently started howling about eroding freedoms in the wake of 9/11 and the passing of the Patriot Act. It is unconstitutional, they say, to pull over someone just because he looks a little like a terrorist, and if such a law is passed, they will scream bloody murder.

Drinkers, on the other hand, will probably shrug it off. Why shouldn’t we, since we’ve been subjected to exactly that sort of treatment for nearly two decades. I’m talking about roadside sobriety checks, of course. Within the confines of that law, the police can stop you, shine a light in your eyes, demand to see your documentation, then, if they suspect you’ve had a few, have the right to conduct a roadside sobriety test.

Which begs the question: why are drunks so easily stripped of their rights? What or who created the environment that would allow unconstitutional sobriety checkpoints, bar raids and the incarceration 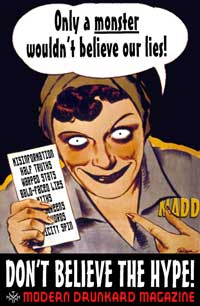 You know who. It’s those goddamn Mothers. The multi-million dollar corporation known as MADD has done more to erode civil liberties in this country than all the terrorist attacks in the world. And they’re not done. Not by half.

Faced with declining profits and waning public interest, MADD has launched a new campaign called Getting MADD All Over Again. Since they’ve accomplished all their early objectives, what’s on their agenda this time? Plenty. Here’s a taste of some of their new goals:

A federal billion dollar a year fund earmarked for setting up and enforcing sobriety checkpoints across the entire nation. Who’s going to pay for it? You, the taxpayer.

New laws that will allow police to pull over drivers because they’re not wearing seat belts. Why? MADD quite openly states such a law could be used as an excuse to pull over motorists who might have drank but aren’t driving erratically.

Criminal charges for drivers who refuse to take Breathalyser tests.

Alcohol advertisers are to be restricted from advertising on television unless 90 percent of the audience is over the age of 21. What programs would meet that standard? None.

Actors in beer commercials must be over the age of 30, cannot appeal to youth in any way, or have anything to do with music, sports, or any other subject that might appeal to young people. Essentially, the only commercial that would meet their criteria would be one with an unattractive, dour-faced, middle-aged male brooding in a dark, unfurnished room with a beer in his hand. With his evil mouth shut.

The Canadian branch of MADD is demanding a national law that would make a .05 BAC a criminal offense. Driving with a BAC of .05 is as statistically dangerous as driving three miles per hour over the speed limit. Is MADD pushing for the incarceration of people who drive three miles per hour over the limit? No. Why? Because everyone would be in jail.

Massive new excise taxes on beer. So people will buy less. It’s the same logic as raising the taxes on food, to prevent obesity.

The fact that MADD isn’t demanding higher taxes on hard liquor seems bizarre until you realize the liquor lobby pays off MADD with huge grants every year. The beer industry, to their credit, refuses to get in bed with the Mothers.

Up to now MADD has strutted around like a widowed queen, vacillating wildly between uncontrollable fits of weeping and paranoid barrages of cruel invectives, and no one in the kingdom dared challenge her. But that’s starting to change. She has demanded so many executions, has restricted so many freedoms that even those in her entourage are starting to wonder if she’s gone too far. There are whispers that she has gone mad with power and bloodlust, and the media — once her most loyal of henchmen — is beginning to speak against her.

“I think MADD’s mission has shifted from getting and keeping drunk drivers off the road to attacking the product, point of sale, advertising and level of taxation paid on beer,” says David Rehr, president of the National Beer Wholesalers Association in Washington, D.C. “I think this neoprohibitionist agenda will ultimately catch up with MADD and destroy it, whether it’s five years from now, 10 or 15. You can’t sustain policies at odds with the behavior of the average American and continue to get support.”

We can only hope.