Never Overserve a Pachyderm
GUWAHATI, India — A herd of wild elephants driven berserk by moonshine trampled to death six people during a December rampage in India’s northeastern state of Assam.
The animals came out of the forest, attacking granaries and drinking country liquor stored by villagers in Tinsukia, about 340 miles east of Guwahati, Assam’s biggest city.

Experts say hundreds of wild elephants in search of food regularly emerge from the forests of Assam to trample rice fields and destroy granaries.
Destruction of the animals’ natural habitats and a growing elephant population are the main causes of the problem, they say.

“It has been noticed that elephants have developed a taste for rice beer and local liquor and they always look for it when they invade villages,” said Dinesh Choudhury, an elephant expert in Guwahati. 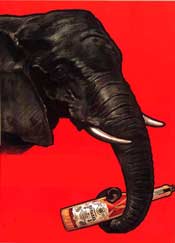 The region, racked by separatist and tribal insurgencies for more than 50 years, is home to more than half of India’s elephant population of 10,000.
Choudhury said the Assam government’s protection of elephants over the last 20 years, including a ban on their capture, had spurred a rise in their population, to about 5,500 now.

Forest officials said wild elephants have killed at least 200 people and angry villagers have killed more than 100 elephants in Assam in the past couple of years.

And people bitch at me for flipping over a couple lousy tables.

Drunk Moose on the Loose
KRISTIASAND, Norway—Norwegians living in rural areas have been alerted by authorities to beware of potentially drunk and hostile moose carousing in the forests.

A warm summer has led to an unusual bounty from the region’s fruit trees, and a sudden and early snowfall left some fruit under snowy cover, where it ferments into alcoholic treats for browsing animals.
“This is the first time I have heard that moose are getting drunk,” said district veterinarian Paul Stamberg. “But I assume that they react the same way people do to intoxication — some become harmless while others are the exact opposite.”

Martin Kolberg, head of the local animal committee in Telemark, Norway warns people to beware of drunken moose: “Be careful when you approach moose that have been munching apples for days. Their behavior can alter and they can become frighteningly aggressive. Clap and see how it reacts. If it doesn’t retreat but instead comes even closer, by all means stay vigilant. It can be intoxicated and attack.”

Okay, I’m spotting a trend here. How long before PETA says we we have to start making room at the bar for these beasts?

Bombed in Baghdad
BAGHDAD—When Dr. Hussein al-Dureml went with his friends to the Tiger Eye liquor store recently, they had a laugh with a fellow Iraqi customer named Wali about the United Nations weapons inspectors who went looking for nuclear bombs in three gin factories outside Baghdad.

“It’s not an atomic bomb they’re putting in there is it, Wali?” one shopper asked as a $21 bottle of Johnnie Walker Black Label Whiskey was slipped into a brown paper bag.

Wali, a 24-year-old electrical engineer, chuckled, as have many Iraqis since learning about the strange business of the nuclear detectives in the booze plant. In Iraq, the liquor trade thrives as in no other Arab country. But the way it’s consumed reflects the shifts in Saddam Hussein’s rule. Since he proclaimed a “faith” campaign in 1996, abandoning a secular model for one more influenced by Islam, alcohol has lived in a twilight zone. Drinking in public is banned, and the English-style pubs that used to line At Nidal Street in the center of Baghdad, a legacy of Britain’s colonial role here up to 1932, have closed. Now, Iraqis drink at home or in restaurants and nightclubs furtive enough to serve alcohol in frosted glasses.

For the folks at Tiger Eye, recent days have been a bonanza. It is the Middle East’s equivalent of Christmas — the Id al-Fitr holiday, which marks the end of the fasting month of Ramadan. Men like Dr. Duremi and his friends have been stocking up for their parties, which have been taking place, more than usual, in the quirky atmosphere of hope and fear that characterizes life in Hussein’s Iraq.

The 1996 ban on drinking in public places that closed most bars and pubs spurred the proliferation of speakeasies and a sharp rise in drinking at home. The Tiger’s Eye was founded after the 1996 ban and moved to its present location two years ago amid the boom in sales. Most customers, predictably, said they supported Mr. Hussein’s decision to curb public drinking. But It wasn’t long before some of them, moving behind the liquor racks to find the privacy they needed to speak more candidly, said the faith campaign has made deep inroads into their ration of fun.

These days some of Baghdad’s most popular drinking places, apart from the speakeasies, are those that sell a brew that Iraqis call pacha. With a history going back to Ottoman times, pacha comes from boiling goat’s heads until the bones dissolve into a creamy broth. According to the legend among hard-drinking Iraqis, a glass or two of pacha, after a night on the bottle, will cure the most stubborn hangover.

Boiled goat head. Gotcha. If it’s all the same to you, I’ll stick to bloody marys and incessant whining.

Brits Make Us Look Like a Bunch of Zima-Swilling Pussies 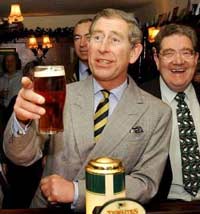 From now on, drinking establishments will be able to serve alcoholic refreshments from 11am on New Year’s Eve to 11pm on New Year’s Day — without having to ask magistrates for permission.

The move is seen as the next step towards ending the UK’s licensing laws and allowing licensees to open pubs, clubs or bars 24-hours a day, seven days a week. The Federation of Licensed Victuallers Associations said longer opening hours over New Year’s will help prevent binge drinking.

Ministers decided to extend drinking hours on New Year’s Eve permanently after two years of successful trials. Licensing minister Kim Howells said: “This is good news for consumers and the industry. “Longer drinking hours will provide consumers with more choice of when and where to celebrate. It is one-step closer to the reform of our archaic licensing laws.”

“The new law will be safer for people because they won’t all try to get a limited amount of taxis at the same time,” said Tony Payne, chief executive of the Federation of Licensed Victuallers Associations “It will stop people pouring out on to the streets at the same time and prevent binge drinking.”

Last month Culture Secretary Tessa Jowell pulled a pint behind the bar of a Westminster local to mark the launch of a bill that paves the way for round-the-clock drinking. The new legislation, which should be in place next year, will allow licensees to open up their pubs, clubs or bars for up to 24-hours a day and seven days a week.

Hey, Britain. Remember that whole Revolutionary War deal? It was just prank. That’s all. Can we come back now?