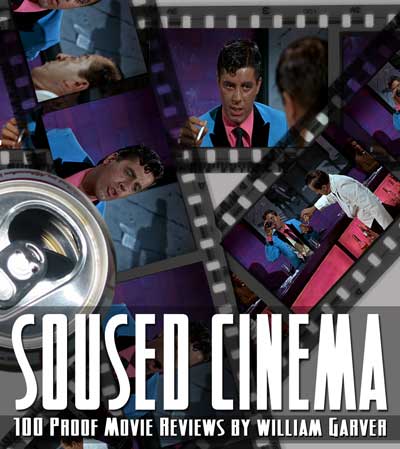 If asked to list the greatest alky films of all time, most critics would rank The Nutty Professor far below more obvious titles, such as The Thin Man and Barfly. In fact, it’s unlikely that Lewis’ comedy would even rate a mention. Nevertheless, The Nutty Professor deserves to be placed amongst movies in the first rank of soused cinema. The film may not celebrate the drunkard lifestyle from its first frame to its last, but it earns its place in the booze movie canon through the virtue of a pair of iconic scenes. In the early 1960s, Paramount Studios had a reliable moneymaking machine in Jerry Lewis. Kids would flock to his films with their parents in tow to see the mayhem and destruction brought about by the lovable idiot. Consequently, Jerry must have driven the studio bosses to drink when he announced that he wanted to tamper with his proven formula for The Nutty Professor. For the first time in his career, the funnyman set aside his recognized “kid” persona, creating an entirely new character with a different voice, different posture, and different look. The film was different as well. Instead of a loosely connected group of blackout gags, The Nutty Professor featured a storyline that was both more coherent and more adult than anything Lewis had previously directed. Jerry stars as Julius Kelp, a buck-toothed, near-sighted, accident-prone science professor at a small California college. Kelp is smitten with Stella Purdy (Stella Stevens), a curvaceous undergrad, but he is too timid to approach her. After being humiliated by a bully in front of Stella and the rest of his class, the professor decides to bulk up, but physical exercise fails to improve his physique. His only other option is chemistry, and before you can say “Jekyll and Hyde,” Kelp whips up a potent cocktail that transforms the nerdy academic into Buddy Love, a conceited, ill-mannered lothario. Despite his bad behavior, Buddy sweeps Stella off her feet and becomes the idol of the collegiate set, who adore him for his singin’, swingin’, and swillin’. Of course, the charade can only last so long. 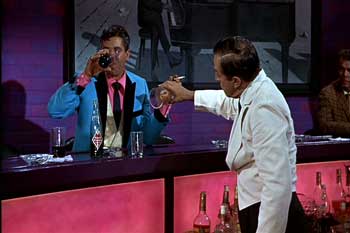 Despite the fact that The Nutty Professor strayed from Lewis’ familiar formula, it proved to be a hit with audiences and critics alike. Over the years, it has become the comic’s most celebrated film, cracking the AFI’s list of the 100 funniest American movies (at #99) and subjected to critical analysis in serious film journals. However, few critics have noted the major role that alcohol plays in the narrative. Once the professor transforms into Buddy Love, he becomes a big-time boozer, leading to two of the finest scenes in the annuls of soused cinema. The first occurs immediately after the professor’s initial transformation into Buddy Love. Kelp’s newly released alter ego makes a beeline for the local watering hole, The Purple Pit, a popular hangout for Stella and the other college students (most of whom appear to be in their mid-forties). Buddy wastes no time in ordering a drink, the “Alaskan Polar Bear Heater,” a beverage of knee-buckling potency. After dictating the cocktail recipe to the Purple Pit’s bartender (Buddy Lester), he allows the mixologist to take a sip of the dangerous drink. The bartender finds the concoction palatable, but then freezes in place as if stricken by Medusa. Buddy is unfazed and has no qualms about downing the rest of the cocktail. The Nutty Professor also contains the single greatest hangover scene of all time. Showing up late for class, wearing tinted glasses, Professor Kelp suffers the aftermath of Buddy’s bacchanalia. Lewis amplifies every sound in the scene to allow the audience to experience what the character is going through. As he shuts the classroom door, the accompanying slam sounds like a cannon shot; chalk rubbing against the blackboard sounds like the scraping of metal upon metal; and liquid dripping into a test tube sounds like the beating of a kettle drum mixed with the crashing of waves upon the shore. It is an inspired scene—the best in the entire film. Because Buddy Love croons between cocktails, prior critics have often wrongly assumed that Lewis based Kelp’s foul alter ego upon his ex-partner, Dean Martin. However, Dino was nothing like the monster Lewis portrays in the film, and Jerry loved and idolized Dean too much to ever portray him in such a manner. It seems more likely that Buddy Love was based upon the juvenile delinquents popularized in the movies of the time, along with large dollops of the darkest parts of Lewis’ own psyche. While The Nutty Professor isn’t the funniest film Jerry Lewis ever made (I’d give that title to The Ladies Man), it is probably his best all around film. Like all of the movies directed by the comedian, the jokes are uneven and the story occasionally descends into sappy sentimentality. At the same time, Jerry’s gifts as a filmmaker were never displayed to greater effect. From the bizarre transformation scene to the lovely close-ups that display Stella Stevens at her yummiest, this film is a candy-colored delight.

Potent Quotables
BUDDY LOVE: I’ve decided that I shall not continue the flight on the gas I got, so give me a boilermaker, and heavy on the boil.

Similarly Sauced Cinema
Daffy Duck and Bob Hope encounter potations of “Alaskan Polar Bear Heater”-type potency in Drip-Along Daffy and Son of Paleface.
The Alaskan Polar Bear Heater
Many movies have featured hard-kicking cocktails, but the “Alaskan Polar Bear Heater” may be the most infamous. Below is the recipe taken verbatim from the film. “Two shots of vodka, a little rum, some bitters, and a smidgen of vinegar…a shot of vermouth, a shot of gin, a little brandy, lemon peel, orange peel, cherry, some more scotch. Now mix it nice, and pour it into a tall glass.” Why the recipe calls for “some more scotch” at a point when there is no scotch in the cocktail is a mystery to me. I can only assume that Jerry was ad libbing the recipe on the spot. By the way, I’ve never been brave enough to drink one myself—the vinegar is the deal breaker for me. However, a good friend of mine filmed himself mixing one up and downing it. He described the cocktail as tasting like “bitters-soaked ass.” When I commented that a lot would depend upon whose ass was soaked in bitters, he responded, “Ernest Borgnine’s ass.” You have been warned. —William Garver

The Hell You Say: Brutally Honest Reviews of All Things Boozed