The personal trainer, musician, and former bike courier known as The Beast describes the beauty of the shooter and the importance of drinking every day.

First taste:
I was 12 years old. My buddy and I got into his folks’ liquor cabinet and mixed a concoction of Beefeater Gin, vodka, and fruit punch. Then we snuck off to the woods and got wasted.

The usual:
A shot of SoCo and a PBR.

How many and how often:
Every day. Every single day. How many just depends. Take today for example: I got up at 11am from a bender and went to Ogden Street South. I had three vodka crans, a pilsner and a shot of SoCo. Then I went to Shotgun Willie’s and drank three 24-ounce beers, then went back to Ogden Street South for a Long Island and a shot of Beam. So far at this bar, I’ve had two shots of Soco and two PBRs. I wasn’t working today obviously.

The secret of your drinking success:
Consistency and focus. Being in good physical shape doesn’t hurt, but it all comes down to the fact that you can’t build up a decent tolerance if you don’t drink every day.

Drunkest ever:
That’s a hard question. Once I went back to my hometown on break from college. Went out with a bunch of old buddies. I got so fucked up that when I got home I took off all my clothes and put on a rugby shirt as pants. I woke up wearing it on Christmas morning.

Mark of a good bartender:
Older and schooled or young and pretty. Either way they have to have the ability to listen to you, and the skill of pouring stiff drinks and big shots. Like the ones at the Lancer Lounge.

Best cities to booze in:
NYC is one. There’s always something going on that involves free booze. I was there for fashion week once doing a modeling gig for Christopher Makos (photog for Andy Warhol). We wound up at an Absolut party. Free vodka all night. Another time because of who I was working with I found myself at a Pamela Anderson anti-fur party. The bar was free but super busy so I just sat back and waited. One of the barmaids noticed that I was the only one being patient about getting a drink. She bypassed all thee people waiting, came out from behind the bar and said since I was being cool about it I could have whatever drink I wanted. What can I say, I’m from the South.

You’ve got 20 bucks:
I’d go to the liquor store and get four shooters of vodka and slam them to shitty daytime TV. They only cost .99 cents. The rest of the day into the evening I would spread myself around to all the familiar spots. There are plenty of places I frequent where I could get a cheap beer and count on a shot showing up. Along the way, I’d pick up a 40 of Mickey’s and as many liquor store shooters as I could afford. I like shooters. They’re cheap and inconspicuous. 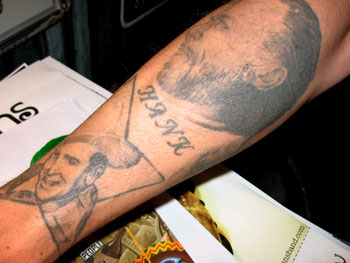 Dream Bender Team:
Charles Bukowski, Johnny Cash, Jack Kerouac (after he stopped writing), and my friends Brian Hagman and Jamie Slade. I honestly don’t know of anyone else who could keep up. Bukowski would be captain, of course.

Describe the evening:
Storytelling. Lots and lots of storytelling. Probably lot of egos butting heads as well. There would probably at some point be a fight.

Why we must drink:
Because it helps me deal with all the bullshit that surrounds me. People get on your nerves, you know? Alcohol either helps me calm myself or makes me more of a prick. Whichever is necessary.

Best music to booze to:
Johnny Cash, Kyuss, Black Sabbath, and Lynrd Skynrd. The questions the songs deal with define me. Like not worrying about money. I don’t need a car. I don’t really need much. I am a decent and simple man. Family first, me second, drinking third.