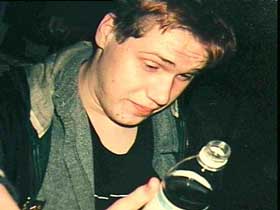 How about the second?
Uh . . . no. I can barely remember last night, don’t ask me about something that happened twenty years ago.

How about last month?
Keep going, you’re getting close.

Last night?
I can barely remember it. I sat at the bar and drank about fifteen beers and some shots with my pal Tom. Tom’s great. He’s one of those guys who’ll buy you shots all night and never expect you to buy one back.

Did you buy him any back?
What the hell did I just tell you?

Yes, but a gentleman—
Hey, I thought this was Modern Drunkard Magazine. Not Modern Snooty-Snooty Wine Tippling Shot Buy-Backer Magazine.

Why does Tom drink with you?
Because I happen to be sitting next to him. Because we go to the same bar. Does it have to be some weird arrangement or something? He gets a thrill out of buying rounds and I get a thrill out of drinking them. We have what you call a symbiotic relationship.

It’s a parasite that attaches itself to to a fish and sucks its blood.
How does that help the trout? 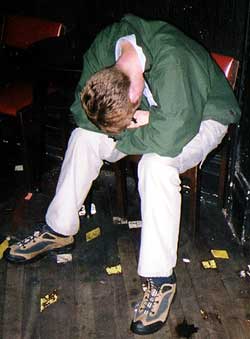 That’s what I’ve been asking you.
Yeah? Well, maybe that particular trout likes the look of a lamprey hanging on him. Have you thought of that?

What do you like in a bar? Besides free drinks?
Free drinks are always nice. They add a hominess to a bar that all the walnut paneling in the world can’t add. I think a bar should spring for a drink every now and then. I mean, people like Tom spend a lot of money in those places.

Who are your drinking heroes?
Bill Wilson.

The founder of Alcoholics Anonymous?
Yes. See, he got all the assholes out of the bars and made room for lampreys like me. See, I’m starting to like that name. Next time I see Tom I’m going to say, “Hey Tom, buy a lamprey a shot.” Also, I could leave my drink and girlfriend alone with Bill and he wouldn’t try anything.

Don’t be too sure. Some prohibitionists have said they would rather commit adultery than drink a glass of beer.
Who wouldn’t?

Have tried foreign beers or micros?
I try not to.

Why?
Because I might like it. And because they’re more expensive, it’d screw up my beer-per-dollar curve. I’d rather be full drunk on crap beer than half drunk on a great beer.

What makes you a good drunk?
Perseverance. When the rest have gone to la-la land, I’m still in there, hanging, sinking the ships they couldn’t. You can’t out last me, don’t even try.

What’s your secret?
It’s like Blake said: “The road of excess leads to the palace of wisdom.”

How’s the palace? Is it nice?
Buy me another drink and I’ll tell you.

Okay. Now tell me.
The secret is to get some sucker to buy all your drinks. See how that works?