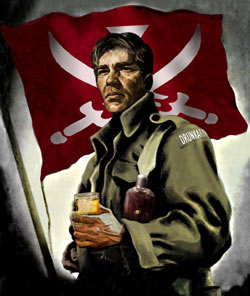 1 Modern Drunkard Magazine was unleashed on the drinking public (1996). Rise up, boozehead! Anything and everything.

3 Feast of Caligo (Roman). All hail the Mother of Chaos! Mix whatever’s on hand in a bucket.

5 Andy Capp debuted in Britain’s Daily Mirror (1957). Best comic strip ever. As many pints as your lady will buy you.

7 Customer Appreciation Day. Hip your bartender to this one. One on the cuff.

8 Anniversary of the Great Train Robbery (1963). Pub pals make off with $7 million. Beer with your more ambitious buddies.

12 International Youth Day. When they march past the pub, taunt them with your drink. Aged scotch.

15 Liechtenstein National Day. The populace of this tiny monarchy drink more per capita than anyone on the planet.
Mighty Mouse
1 oz Vodka
3/4 oz Triple sec
3/4 oz Grenadine
Mix and shoot. 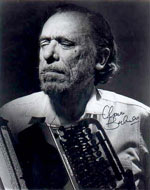 17 Feast of the Hungry Ghosts (China). Remember: Ghosts are afraid of whiskey. Whiskey.

18 Bad Poetry Day. That’s every day for some of you. Port.

20 National Homeless Animals Day. If activists tied a bottle of scotch around every stray’s neck, they would all be adopted immediately. And named Lucky. Lucky Lager.

21 National Forgiveness Day. Good day to test the endurance of those 86s. Whatever you can get away with.

22 Dorothy Parker’s Birthday (1893). “I like to have a martini, two at the very most. After three I’m under the table, after four I’m under my host.” At least four martinis.

23 Anniversary of the Death of William “Braveheart” Wallace. When they cruelly drag you out of the pub, make sure you roar, “Freedom! Freedom!” Scotch.

24 Festival of Vulcan and the Nymphs (Roman). Vulcan was a forerunner of Hef. Jello shot. 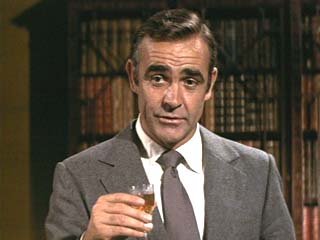 27 Feast of Incandescent Rebellion (China). Light up a dim dive with your sparkling personality. Flaming drinks.

29 Pardon the Sea Day (British). Damned polite of them, considering all the sailors they’ve lost. Grog.