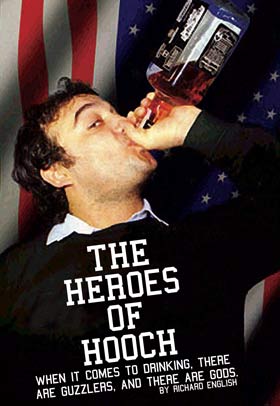 Some works celebrate sozzlers, propping us on a dais for a little while, displayed at our hiccupy best. Usually, though, drunkards in books, plays, movies, or on TV are retreads of the same tired clichés. 1.) Man gets drunk. 2.) Man runs over innocent pedestrian/loses his family or career or both/has sloppy casual sex and is rewarded with a disease/crashes car and kills himself/abuses his kids/chokes on his own vomit/makes ass of himself in public/wakes up married to a stranger/or drinks self to death with a hooker in Vegas and wakes up with an Oscar. It’s always the same. Drunkards are pathetic, self-centered, dangerous, and have their own cells in Mayberry. No matter how they are tricked out for each new iteration, the message is this: drunkards disgrace society and must be punished.

And, Jesus, that’s depressing. It’s like popping by your favorite strip joint and instead of finding Naughty Nanette and her Frolicking Sweater Puppets you get Phyllis Schlaffley grinding away to a Sousa march. 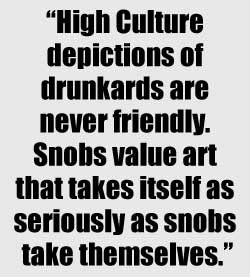 Each of us has our own stockpile of angst, troubling insecurities, and random miseries. What’s the point in seeking more? What is served by subjecting ourselves (and often spending money on) yet another detailed tour of life’s horrors? I mean, damn. It’s as if the whole nation is channeling Kurt Cobain — and liking it. Isn’t a grand, rolling belly laugh a better curative than wallowing in a nasty puddle of fear and anguish? Aristotle said that when we view a tragedy we experience catharsis, thus ridding ourselves of our dark feelings. Not to quibble with the Bearded One, but you’d have to be a serious egomaniac to devote hours of your time to a depiction of death and terror and then leave the theater feeling cleansed. How did drama become more respectable than comedy? Who decided that there’s deeper meaning in tears of sadness than in tears of laughter? And why did every failed drunkard become a novelist or screenwriter?

I think it started with Shakespeare. By all appearances a party-friendly guy, he still had to avoid running afoul of Queen Elizabeth and her cadre of moral interpreters with their bizarre need to govern every detail of narrative construction. His most famous souse, Sir John Falstaff, is a bloated, devious, clown. From that point, things only got worse.

Novelist and playwright, Emile Zola built his entire career around mawkish attacks on drinking. For Henrich Ibsen, alcohol consumption was weakness. Fitzgerald’s protagonists generally plunge into drunken morbidity by page 50. When Hemingway performed at the height of his powers, Ray Milland had a Lost Weekend. Right on its heels came the abnormally judgmental situation comedy, fresh from its alien galaxy and ready to ridicule drunks, hangovers, and sloppy intoxication, recostuming sozzlers as ineffectual boobs. By the end of the last century (with a brief pause for the tipsy-tolerant 1970s to stretch their legs) we were routinely subjected to the obnoxious spew from the Lifetime Channel and After-School Specials warning children not to drink or they might pry open Dad’s gun case, accidentally load a pistol, and accidentally whack one of their classmates. In American Pie, Stifler chugged jizz as punishment for being ripped and randy.

Go grab a piece of paper. Make a list of characters, from books, movies, or wherever, who are positive examples of the drunkard. Avoid the silly ones and focus on characters who act, who move forward toward a goal and are who they are because they drink. Take your time, but I bet you have trouble coming up with more than ten.

Took a few minutes, but here’s a sample of mine:

1.) Bluto Blutarski. No one in the history of film ever drank Jack with more epic relish. He fucked with the dullards and won. He married a full-on scorch-cake. Then he became a senator. Wicked.

2.) The one and only James Bond, 007. Mister Shaken-Not-Stirred himself. Licensed to kill and a poster child for the beast with two backs. His martini shaker gushed raw pheromones.

3.) The Film Noir Detectives. A package deal from stage, screen and literature, it includes Philip Marlowe, Nick and Nora Charles, and Sam Spade, among others. Hooch didn’t flop one way or the other with these folks. You breathed, you drank. Cue the fat lady.

4.) Liquor Industry Advertising Flacks. It’s hard to stomach, but the fact remains that nobody – nobody – presents intoxication in a better light. Granted, it’s their job to make slurping look like a hoot, but since it is a hoot we must cut them some slack. Maybe they’ll do us all a solid and stop with the earnest “designated driver” ads. That’s our issue, should we choose.

5.) Stone Cold Steve Austin. AKA the Texas Rattlesnake. AKA the Bionic Redneck. Except for The Rock and Hollywood Hulk Hogan, Stone Cold is the most popular wrestler in the WWE stable, which means he’s among the most popular in the world. His shtick is to stoke his bad-ass furnace with heroic quantities of scotch, bourbon, vodka, tequila, and beer. Mostly beer. Each victory is celebrated by catching several cold ones thrown to him by a stagehand, popping them one by one, and pounding those bad boys while stalking the squared circle in a bravura display of Beer Love and Explosive Foam. Stone Cold without a beer is like Bob Marley without his dreads or Nietzsche without a headache.

All five of these examples share one thing in common, besides being hoochophiles. They are connected by a similar aesthetic. Serious art and culture critics — you know, the ones who can’t abide anything without subtitles and who spend their days sucking the life from art through analytic vampirism — would see my five as examples of Low Culture.

As in not high. As in beneath educated consideration. As in Of The Low Classes.

Serious critics are concerned with High Culture. They thrill at the sight of obtuse brush strokes, grow giddy in the clutches of the Literary Flavor of the Day, festoon the obscure with plaudits, and wallow like wildebeests in the mud of their Important Opinions. A serious critic is the very definition of an elitist. Cold snobbery fills his veins. In his breathless quest to stay one step ahead of the next trend, so he can tell his friends he was there at the beginning, the serious critic constantly pats himself on the back, bubbling with the knowledge that even though he has never put his ass on the line and created anything himself, he can still Arbitrate. He is a mover, a shaker, and an opinion maker. Art is what he says it is. If you don’t see things his way – the only way – you are either being purposefully contrary or are lamentably uninformed. You might even be stupid.

High Culture depictions of drunkards are never friendly. Snobs value art that takes itself as seriously as snobs take themselves. Theirs is an insular world, tribal and sterile, that sustains its viral pretension by feeding on its own denial.

Thankfully, we have allies. Three cheers for the Low Brows. May their pints stay full, and their belches greasy. Never forget that you can turn your whole day around with a six pack and a good fart joke. Salud!