“Seven shots in five minutes. That was my breakfast, lunch and dinner.”

The Usual:
Natural Light and mini-charges (Red Bull and Jagermeister). You get drunk and wired at the same time and you become an asshole and everybody hates you. 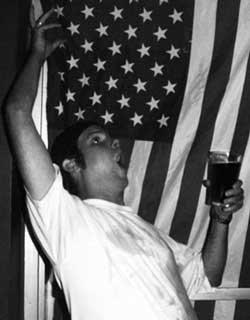 First Drink:
I was 13 or 14. I picked the lock on my parents’ liquor cabinet with safety pins. I found a bottle of Everclear they used to make eilicher (German eggnog). I thought it was vodka so I tried to drink it straight.

Drunkest Ever:
I got all shit-faced at the Lion’s Lair. I got home somehow. Since I’m known to pee on the walls when I’m drunk I decided to sit down on the john. I mistook the living room for the bathroom and accidentally sat down on the Lazy Boy instead. I passed out with my pants down and my dick in my hand like a cigar . . . pissing away. Since the chair was pleather I just kind of stewed in it, my nuts floating like orange golf balls. The next day I had rashes on my legs and ass.

Surefire Hangover Cure:
Bloody Mary with 2 shots of Absolut (to back it up) cuz Bloodys are too goddamn weak.

Favorite Bars:
It’s a toss up between six.
#1 Goosetown Tavern Half the bartenders are my friends and they cheers drinks with me. Actually they used to until I got 86’d until I apologize which I’m not going to do.
#2 Rhino Room Because the bartenders are so goddamn pretty and there’s lots of nice abnormal people.
#3 Don’s Mixed Drinks It’s comfortable and I can act like an asshole yet not be surrounded by them.
#4 Streets of London Pub I’m for any place that has $2 you call it’s every Tuesday which leads me to the next one.
#5 Recovery Room $2 you call it’s every Sunday.
#6 Uh, I can’t remember right now.

Best Qualities in a Bartender:
Cool and not irate. One who will allow me to get super-trashed without cutting me off, and the favor is repaid with 40% plus tipping.

Worst:
One that cuts you off after you’ve given them more money than they deserve.

You’ve Got 20 Bucks:
I’d go to Shotgun Willies where my friend works and hooks me up. I’d get trashed and stare at the girl who’s got WD-4O big ass titties like she was shot in the back with two cruise missiles.

Best 86 Story:
It was at a local bar on Colfax. I started in with my friend Hans at noon. He was throwing ice at me by 2pm. I had half a beer left so I tried to splash it on him. The glass slipped, flew out of my hand and hit the bar and a customer. Undoubtedly a DU student. He got up in my face and started in on the whole “I’m gonna kick your ass” shit. I told him to get lost and the bartender threw me out. I swung my skateboard at him to get him away from me and took off after an ice cream truck for a Nutty Buddy. Then I went to the Lions Lair where I blacked out a few hours later. I didn’t go home but somehow ended up out on 1-76 walking around with my skateboard over my shoulder. I was amidst warehouses and chemical factories and the inhabitants of the wrong neighborhood if you know what I mean. I saw a cop on patrol and told him I was lost. An ambulance showed up for some reason and they concluded that my “bump on the head” story was a farce and I was just extremely intoxicated. My dad picked me up at the police station took me home and offered a game of chess. However, I realized it was last call so I went back to the bar I got kicked out of and got a shot. Then I went back home and played chess with my pops ‘til 3am.