When this tattooed temptress isn’t slinging drinks or getting inked, she’s slamming back double Jacks to the sweet sound of heavy metal music. 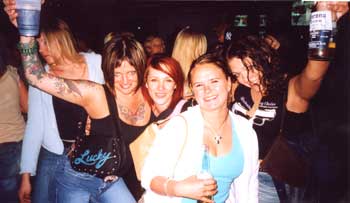 irst dance with the bottle: I was 14 years old. My friend Kelly and I stole a full fifth of Jack Daniels from my parents and drank the whole thing. Of course I did the obligatory puke- on- everything- and- get- busted- by- Mom- and- Dad thing. But hey, that’s part of the fun. And even though the stuff made me godawful sick I still love it as sweet nectar to this day.

Favorite drink: Look dude, are you stupid or something?

How many and how often: That’s more like it. At the first bar of the night I have four double tall Jack and Cokes with intermittent shots of chilled Patron Silver. Then I move on to the next place and repeat. If they don’t have my brand, I’ll settle for Beam. I like Jim, just not as much as Jack.

Best qualities in a customer: People that don’t want wussy drinks. People who drink the hard stuff, who know exactly what they want. A “Thank You” doesn’t hurt either.

And the worst: People who order frozen daquiris and then start sobbing because you didn’t sugar the rim of the glass. People who act like they want to order, but when you get there and they don’t have the faintest clue. People who don’t have their money ready and whiney women who cry that their drink is too strong. The only thing worse are whiney men who do the same. Oh yeah, and the “Just surprise me” crowd.

When you’re on the other side of the wood: I like it when the bartender is attentive to my needs and pours a good shot. Someone who possesses Bartender’s Telepathy: They know when you need another round before you do and bring it before you can open your mouth.

What makes bartenders bad: Not paying attention to those in need of another round. I hate when the bartender repeatedly forgets what I drink, especially when I’m a regular.

The ideal joint to get juiced in: A dive bar for sure. A place that’s dark and loud. Medium crowd. It’s got to have a good jukebox. By good I mean George Thorogood, AC/DC and Guns ‘n Roses. There’d be a couple of old pool tables. A place where they pour ‘em cheap and strong and nobody fucks with you.

What makes a good drunk great: A great drunk is a happy drunk. No fighting. Someone you don’t have to take care of when both of you are hammered.

Drunkest ever: I was walking from the Ogden Theater to the Park Tavern with some friends. It was after a Dokken/LA Guns show. I had this LA Guns shirt on and I took it off and started waving it around. I was shirtless for over a block on Colfax. I wandered down Ogden and squatted in some poor fucker’s yard. Before I could stand up I fell in my own piss and had to be carried home.

When do you know you’ve had too much: I never think that. It’s hard to think when the lights are off. I usually just black out and keep on going.