Modern Drunkard: You are a hobo, sir!

Soup Bone: That I am.

MD: But no ordinary hobo. You are a Hobo Emperor.

SB: That’s what they tell me.

SB: The hobos who elected me.

SB: It ain’t that exciting.

MD: Yes. You, however, were elected. Shouldn’t you call yourself President of Hobos?

MD: Right. Where is your crown, Sire?

SB: My crown? I like to say my crown is the morning dew. My throne is a duffel bag in the back of a boxcar. My realm is the wide open—

MD: Wouldn’t you rather have a real crown, of gold and what not?

MD: If I were to offer you a bejeweled crown of the utmost quality, you’d refuse it?

SB: I just prefer what I have, which—

MD: You could hock the thing. You could buy your own train and ride about at 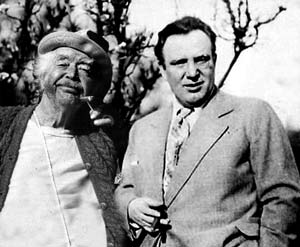 will with your hobo buddies, dining on the finest of ripples. You hobos prize your booze, don’t you?

SB: We’re trying to get rid of that image. Everyone thinks all we think about is drinking, but—

MD: Do you drink?

SB: Not really, I — why, do you have something?

MD: I gentleman is never without a flask of scotch, sir, and here his mine. Would you—

SB: I’ll have a little to take the dust off my smile.

MD: There. That’s a jolt. That’ll peel the grime from your grimace.

SB: No, thank you kindly.

MD: Are you sure? No? This is rather disturbing. My editor assured me you chaps drank down the moon, so to speak. Didn’t the olden day hobos drink down the moon? Have you been to Big Rock Candy Mountain?

MD: Are you sure? They have lakes of whiskey there, you know. “There’s a lake of stew and of whiskey too. You can paddle all around ‘em in a big canoe. And the little streams of alcohol come a-tricklin’ down the rocks.” I must say, I wouldn’t mind going there myself, providing there were decent accommodations.

MD: Yes, but are not songs a reflection of the human condition, sir? Sire? What about this?

MD: That, sir, is the internationally recognized hobo sign for “There is liquor here.” I got it from the Hobo Handbook.

MD: Oh, for the love of God. No wonder you’re not drinking properly, you haven’t even read the handbook! You, the Emperor!

SB: No such damn thing.

MD: Is so! Printed in 1939 by Jeff Davis, the first King of the Hobos. Didn’t there used to be a veritable army of hobos back in the old days?

SB: There was a whole nation of us.

SB: The Depression ended. People got lazy and stopped moving about.

MD: People got lazy and stopped being hobos?

SB: That’s right. Lot of them got back in society, a lot of them just settled down.

MD: You’re speaking of winos. Or bums, if you will. 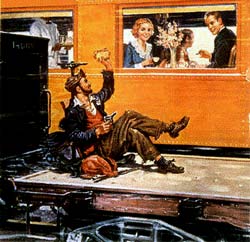 MD: Oh, they do much more than that. They also spare-change, sing and drink. They are nearly professionals at making nuisances of themselves.

SB: Winos don’t wander. They just sit and beg. They’ve nothing to do with us hobos.

MD: Let me get this straight. Hobos don’t drink much and they go around looking for work?

MD: Oh, for the love of God. What’s the point of being a hobo if you don’t drink and have to work? It takes all the shine off the thing. Gandy dancer.

SB: That’s a ‘bo who sometimes works for the railroad.

SB: What about them?

MD: Oh, nothing. I just like saying it. Gandy dancer. It has a fancy ring. Emperor of the Gandy Dancers. Now, that’s a title. If I were a hobo I would call myself a gandy dancer, whether I worked for the railroad or not. If someone were to say, “Hey, hobo! Put away that bottle of ripple,” I’d stoutly reply: “I am a gandy dancer, sir! Retract your statement at once or suffer a sound thrashing!”

MD: Most certainly. Do you rumble with the winos when you come across them? Root them out of their alley hovels much as the wide-ranging badger roots shiftless prairie dogs from their filthy holes? Then lustily guzzle their precious wine and laugh at them as they cower at your well-worn boots, groveling for hobo mercy?

MD: Sir! Your language, please! I remind you that you are royalty! If you don’t set a proper example, who shall? Have you stabbed other hobos?

MD: But you’ve surely wanted to.

MD: What if a hobo stole your ripple?

MD: Pity. What if someone attempted to usurp your throne? Stage a coup de tramp, so to speak.

MD: Yes, but it could be a tramp who’s attempting to seize power. A shiftless tramp who’s been eyeballing your royal ripple for some time now, whispering amongst his tramp cronies, plotting his revenge—

SB: Revenge for what?

MD: Oh, I don’t know. Perhaps his lady has become smitten with your royal finery. Perhaps he is envious of your crown of morning dew, or your duffel bag throne.

SB: Those things are for everybody. There’s no need to fight over them.

MD: But what if your subjects should rebel? Are you prepared to put them down most mercilessly? Or will you mollify their rage with barrels of the finest ripple?

SB: Why would they rebel? I don’t tell them to do anything. They can go about their business as they please.

MD: Well, what kind of emperor are you? Have you no desire to rule? If you properly organized your hobo tribe, well, it would be quite something. Your ragged army could raid wine shops and breweries at will, swagger off with your booty, then disappear into the night like pirates. You’d board your boxcar galleons and whoop it up on the way to the next town, the next looting of liquor and ripples. It would be magnificent!

MD: So I am gathering. What happened to your rugged, super-violent code? It seems to me you’re attempting to come across as a gang of huggable brutes desperate to warm the hearts of orphans and trade tea cake recipes.

SB: You’ve watched too many movies.

MD: I should say. Now, the National Hobo Convention elects a king every year, as opposed to an emperor.

MD: Are you prepared to go to war with the King of the Hobos?

SB: Why the hell would I do that?

MD: Well, surely there’s not enough room on the rails for a king and an emperor. What if the two of you should by chance meet? Would there be a battle royale? A ripple drink-off? A stabbing contest?

SB: No, I don’t expect there would.

MD: What a pity. Why do you call yourselves hobos?

MD: Is that so? My irrefutable 1933 Funk and Wagnall’s Dictionary defines hobo as “an idle shiftless wandering workman, ranking scarcely above the tramp.”

SB: The squarejacks have always spoken against us, because they envy our freedom. To hell with them.

MD: Huh! I also read that the word’s etymology is a derivative of the French greeting, “Ho, beau!” Which means, “Hey handsome!” It was a mocking interjection in 18th century France, used when beggars tried to get the attention of well-heeled gentlepersons passing by.

SB: The hobo is American. I don’t know about any French rail riders, but more power to them. It takes all kinds to make a world, that’s why there are hobos.

SB: I don’t know anything about killing. We just try to get along.

MD: Speaking of which, would you like another smile duster?

MD: I’ll have another.

MD: Yes, but you realize your friend helped whiskey a little bit, eh? I mean, whiskey didn’t just jump into him. The hobo had to, you know, open his mouth and tilt the flask a little.

MD: Why did you become a hobo?

SB: I got that travelling’ itch. The itch to meet new folks, see new lands—

SB: Well, I got to get going. I got a bus to catch. Much obliged for the drink.

MD: A bus? What about the rails, sir? What about your duffel bag throne? This is akin to the Emperor of the Pencils using a pen!

SB: It’s too damn cold this time of year.

MD: It wouldn’t be if you drank properly. A couple more jolts of single malt and you’ll be in fine boxcar riding condition!