MDM has a word with David Wondrich, one of the world’s leading authorities on cocktail history and culture, not to mention the author of an indispensable collection of drinking books, including Esquire Drinks, Killer Cocktails, Imbibe! and Punch.

Modern Drunkard Magazine: Was there a seminal moment that got you interested in cocktails?

David Wondrich: (laughing) Yeah, someone offered to pay me $3000. I was a college English professor at the time and didn’t have a lot of outside income, and writing about cocktails actually paid a little better.

MDM: What was your very first cocktail?

DW: I remember carrying plastic canteens around full of Tequila Sunrises. That’s when I was in boarding school, before I got kicked out.

MDM: Did you get kicked out because of booze?

DW: No. Well not directly because of it, no. Mostly I got kicked out because I was a poor student.

MDM: Do you have a cocktail most evenings?

DW: When I get done writing for the day, I make myself a drink. Usually around 6:30, when I knock off. I have to get my work done first because once I have that first cocktail, it’s like “To hell with this, I don’t feel like writing.” But, yeah, I have one at least every evening. 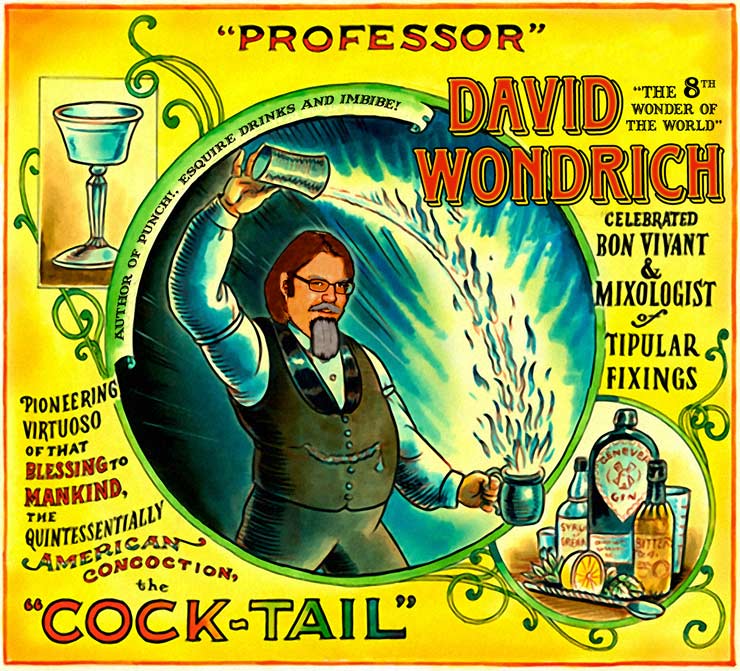 MDM: What’s the usual these days?

DW: It differs. I just check out what I have around and go from there. I like to vary things.

MDM: Your home bar must be a thing to behold.

DW: I actually don’t even have a bar at home. My house is too small. But almost every surface is full of bottles, glasses, antique shakers and that sort of thing.

MDM: What does your wife think of it all?

DW: Oh, I think she gets tired of all the stuff all over the place, but she enjoys the cocktails.

MDM: Just out of curiosity: outside of a lecture or demonstration, have you ever been called upon to mix a Blue Blazer?

MDM: Ever light your sleeves on fire?

DW: No. I mean, that fire wants to go out. I’ve singed myself a time or two. But it’s not really that dangerous—the whiskey wants to go out. The whole point of a Blue Blazer is that it’s a public performance. Of course, if you then squirt the flaming whiskey across the room from a huge syringe and have your friend try to catch it in a pitcher, well, that can go wrong. Very wrong.

MDM: What’s the state of cocktail culture here in the States?

DW: It’s improving. Much different and better than it was 11 years ago when I started writing about it. More and more people are taking an interest in what they drink, instead of settling for a plain old gin-and-tonic or something. There’s a lot of geekiness about it now, too. And a lot of snobbery. But that’s a small price to pay for being able to get what you want to drink.

MDM: How about in Europe?

DW: Well, some of the finest bars in the world are in Europe. So you can always get a great drink there if you know where to go. But cocktail culture is a little thin on the ground there. Often, you’re better off drinking what the locals drink and not pushing for a cocktail. Shots, beer, simple drinks. Still, it’s growing about as fast as it is here, but it’s a few years behind where we are in terms of its general reach. Also, too many of the good bartenders turn into brand ambassadors, which is holding them back. And they make some really weird drinks in Europe.

MDM: What are your thoughts on bartending schools?

DW: Oh, they’re not all bad. But for the most part they’re not aimed at contemporary mixology. Mostly they turn out nightclub bartenders. People who can pour a handful of basic cocktails and see who’s the fastest with a bottle opener. We could do with a little less snottiness from bartenders, too.

MDM: No kidding. If you could only have one drinks guide-book on your shelf, which would it be?

DW: Wow, that’s a really good question. The Savoy,1 of course. And Jerry Thomas’. But I don’t really need guides for recipes anymore. I guess if I could only have one I wouldn’t have any.

MDM: Let’s move on to your latest book, Punch! Do you have a personal favorite?

DW: I don’t know if I could pick a favorite. So many off them are so excellent. The Bombay is terrific.

MDM: It is. I made a batch for the Super Bowl.

MDM: Well, I violated most of the good advice in your book, and tried to make it by fudging the ingredients. I plan to try again, though, with all the right stuff.

DW: I also really like the Artillery Punch. That is terrific.

MDM: With punch making a comeback, do you worry about poor-quality pre-bottled punches or ingredients arriving on the market?

DW: Actually, punch reacts better to bottling than cocktails. The ingredients lend themselves to that kind of thing. I guess, like most things, it all depends on the quality. I’m sure some multinational will step in with something truly awful—sparkling pomegranate-acai punch cooler or some shit like that, based on ADM2 grain alcohol, rather than good, funky rum.

MDM: Right. I find most pre-made cocktails, like the Bacardi stuff, undrinkable. Too sweet.

DW: Uh-huh. They sure could be a lot better. That said, back in the ‘80s, when I was a musician, I used to drink a pretty fair number of Heublein canned gin martinis. You could get them at any 7-11. Much more fun than BuDW:eiser, if you’re drinking from a can.

MDM: What’s the drunkest you’ve ever been?

DW: One 4th of July I drank two cases of beer by myself and God knows how much moonshine. A couple of hours later I woke up—or came to—across the road from where we’d been partying and had like a moment of clarity. I felt totally sober. Like it was the eye of the hurricane or something. I thought okay, I can handle this. And then I was totally drunk again.

MDM: Do you trust people who don’t drink?

DW: Oh, sure. I guess so. I just don’t usually want to go out with them. And proselytizers, people who go on and on about why I shouldn’t drink, I don’t like them. I’m not going to force anyone to drink who doesn’t want to, so they shouldn’t try to force me to stay sober.