1 What are you drinking these days?

Let’s just go with this day. Four mimosas and now have switched to whiskey with a tiny splash of Coke. I have no allegiance to any brand of liquor as smoking has dulled my taste buds to a place where I completely understand a cat licking its own asshole. I lean towards the coolest bottle. Beefeater gin. Canadian Club is very Mad Men. Deep Eddy vodka. The same way I like football teams based on the uniform. But that’s when I’m feeling fancy. Usually I just get the cheapest plastic jug shit due to the amount of people who are drinking at my house. Fuck ‘em.

2 Since you’ve been on the road nonstop and you spend a good amount of time in your hotel room, what’s the drink you must have with you?

My standard is vodka/soda with a splash of grapefruit. Grapefruit juice is hard to find but here’s a hot tip: “True” brand powdered grapefruit packets. Google it. Amazon it.

3 During your travels, what hotel bars have you really enjoyed?

My favorite that I mention in my book This Is Not Fame—thanks for the plug—is The Office in Chattanooga. It’s attached to a Days Inn with a 24-hour diner. Drunkard’s paradise. Smoking allowed, last I was there, maybe six bar stools, four tables and a tiny stage. I’ve fallen in love with every bartender they ever had.

4 Since you are a frequent traveler and generally fly Delta, what’s your favorite Delta Sky Club and what made it so special? 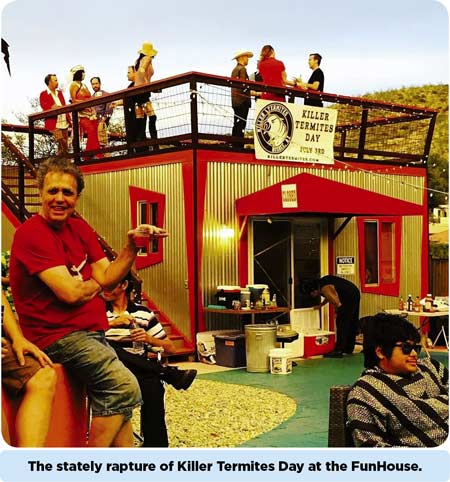 5 What’s the most drunk you’ve been on a flight?

I’m having to field this one out to my friends here in the FunHouse. Everyone has a partial story of a vague memory of me being out of my tit and embarrassing on a plane. But the only one I was ever removed from was trying to leave Alaska and I wasn’t even that drunk, meaning I remember it. I got a bit mouthy with a flight attendant—rightfully so—and he used the smell of alcohol on my breath as an excuse to toss us. And then I went back to an ecstasy party that I had blown off because I didn’t want to pay the change fee for different flight.

Turns out there was no fee to be thrown off a flight for being too drunk. And well worth it. I don’t know if this rule still applies. But check with your carrier.

6 What are the best and worst airport bars you’ve been to?

Tucson is the best and not only because it’s my regular outbound. It’s tiny, they know me by name, and they start serving booze at 6am. I’m like Norm from Cheers there. They know my drink.

Worst? It’s a three-way tie between LaGuardia, Newark and LAX. But I’m in the Delta Sky Club, so fuck ‘em.

7 Back in Bisbee you’ve had some wild, booze-fueled, debaucherous parties at the FunHouse. Which are the most memorable?

You are the worst guy for this job. You keep asking a drunk about his best drunks. As though memory isn’t the first fallen soldier of the event. But perhaps that’s what a modern drunkard is—a guy who has two glasses of Pinot and says a salty comment to the boss. I know the gals from Birdcloud pissed on my face. You should interview them. Torch-carriers.

8 Sadly, there’s someone who’s going to remind you of the shit that happens the night—or weeks—before, like a drunkard’s curse, our memory is shit but others are ready to let us know just how fucked up we were.

The sober guy is always the worst. His name is Butters and he remembers everything. He stays up the latest but leaves before you think to kill him in the morning. He wasn’t there on the Birdcloud night. But cocaine was. Cocaine is as bad as Butters. Some of my clearest memories are due to blow. Otherwise I would have blacked them out.

9 You’ve mentioned The Shady Dell on your podcast and even offer to go and have a drink with fans who visit. How is it drinking with a fan one-on-one?

I much prefer it. I get major panic having to go out after a show when there’s mobs of people. You can’t talk to everyone so you just feel like you’re letting everyone down. Sure, talking to someone for two minutes seems trivial until there’s 300 people wanting two minutes. I believe that would be ten hours. But my math is shaky like my hands.

10 I guess you don’t have that, “Get me the fuck out of here” feeling as much when it’s one-on-one.

Depending on my mood, but mostly no. I’ve always said that I’m only famous within 100 feet of my gig and only for an hour before and after the gig. Generally I’m very happy to get recognized outside of those confines.

11 Since the FunHouse is your home bar, what booze is usually in stock?

As I said earlier, plastic jug vodka, whiskey, gin and tequila. Rum is always here but nobody drinks it. We have to move the rum. Jon Taffer would make some tattooed “specialist” have a rum special and rename the place TGIFunHouse.

12 Whose idea was Piss Roulette, where you fill up six water guns, five with booze and one with piss? It seems to be a popular game at the FunHouse.

I’ll take credit for that but we are a community of drunks. A think-tank. So who knows? Becker came up with the idea of putting a helium balloon on a fishing pole with a sardine in a rat-trap. “Sky-fishing for raven,” he called it. It takes a village.

13 I can only imagine the drunken madness that’s gone on behind those walls of your compound. You’ve held Super Bowl parties. What’s the wildest one that you can remember?

The first rule of Super Bowl party is that there is no longer any Super Bowl party. But for the most part, I’m pretty much a dullard at home. People show up thinking it’s gonna be some Hunter S shit going down. Even when we had big parties, I was usually hosting. Serving snacks. Filling ice. Being a pleasant person. People get let down.

14 Based on your podcasts during the 30 days of your Tin Can Rehab, when you sequestered yourself to try to quit smoking, you ended up making a lot of old-time drinks with Greg Chaille such as the Harvey Wallbanger. Did you and Chaille make any cocktails that you still drink?

The Negroni was the one that was funny at the time but it ran a short course. But my favorite—should Mrs. Chaille be inspired—is the proper whiskey sour, shaken with egg whites.

15 I’ve heard you say more than once you’ve considered giving up comedy and working as a bartender again. What would be the ideal kind of bar for you to work in?

I never worked as a bartender, for the record. But the answer would be: Tree’s Lounge.

16 I can easily see you slinging drinks in a bar like that. I guess it’s similar to the FunHouse, minus all the color.

And those would be my ultimate customers. Sea-horse posture, not a lot to say. Ordering drinks where the ingredients are in the name. Vodka/orange rather than a screwdriver. You get it.

17 How many drinks would you say you have in a day?

In a court of law? If we have attorney-client privilege, I’ll say 12-ish?

18 For readers who are low on cash, what’s the go-to bottle that you’d buy to get the job done?

I’d say to do stand-up comedy. You forget that alcohol costs money. For other people.

19 You have an army of drunkards behind you named The Killer Termites and you even have an official day for them in Bisbee, July 3rd. Don’t you throw a party every July 3rd?

We throw a party every day. Today is Uncle Bill Day. He was our neighbor and at best count, the sixth podcast guest to die. It’s like that.

20 I’ve read you don’t like doing festivals and prefer smaller venues as opposed to larger ones. Do you drink more when you’re playing larger venues because of the number of people there?

I drink roughly the same amount every show. Just enough that I don’t want to kill myself, having to repeat the same shit over and over.

21 I can see drinking helping with that. When you did the Tosh.0 Drunk Future segment, how drunk were you? Because it ends up with you pissing in an ice bucket.

I remember they did give me a quizzical look when they realized I was drinking heavily. I’m not good at pretending—or as they say “acting.” I don’t remember pissing in an ice bucket. Method pretending.

22 When do you think you’ll finally make it on the #MeToo list?

I’ve #MeToo’d myself on stage and on social media. I’ve helped people #MeTooing me with rewrites and retweets. Nobody cares.

23 How does alcohol affect your writing process, such as when you put together your recent books? There’s an old adage, “Write drunk, edit sober.” Does that work for you?

I seriously thought I came up with that myself. But I added Adderall into the equation.

24 A lot of drunkards are mistrustful of teetotalers since they never let their guard down or give in to the disinhibiting effects of alcohol. What do you think about bartenders that don’t drink?

There are a handful of sober people who I feel comfortable being drunk around. Either they know to shut the fuck up or they have no friends or family that would notice them missing.

25 Outside of a bar you frequent, where you can speak openly, do you think comedy is one of the last forms of free speech?

Free speech is available to everyone. So long as you can suffer the consequences. Fuck the King of Thailand.

26 Last question: Is there a story you wouldn’t mind sharing about drinking with Sean Rouse? He’s already very missed.

If you drank with Sean Rouse, the way Sean Rouse drank, you wouldn’t remember.