“What do you mean you’ve never been to McSorley’s? Geez, Tom. I thought you said you were from New York.”

It was a phrase I had come to both expect and dread. Yes, I am from New York, and yes, I am known to frequent bars. A lot. Some bars ask me to come in when they’re having trouble getting rent money together. The IRS allows me to list three different taverns as dependents on my tax returns. But, before I left the east coast at the tender age of twenty-two, I had never managed to set foot in what is the longest continuously run saloon in America. Shame was my companion. My friends gave me the kind of looks Texans reserve for vegetarians.

For those not familiar with its storied history, McSorley’s Old Ale House is, as the name suggests, an old ale house. Old. Very old. Irish immigrant John McSorley founded the 7th Avenue bar in 1854 and it has continued to operate ever since. Of the 2400 American bars that existed when McSorley’s first opened its doors, it is the sole survivor. Prohibition? Don’t make me laugh. In a city where laws are treated as suggestions, McSorley’s remained the favorite of politicians and police. The only change in operation during that dark time was to brew the beer in the basement. Prohibitionists and Elliot Ness be damned.

So when Laura, my fiancée, suggested a trip to New York as a birthday present, I saw an opportunity to make things right. The four-day trip was to be a freewheeling affair with only one thing on her agenda and only one on mine: She wished to visit Cathedral of Capitalism, Macy’s, and I would put to rest the clamoring ghost of my past: I would visit McSorley’s. 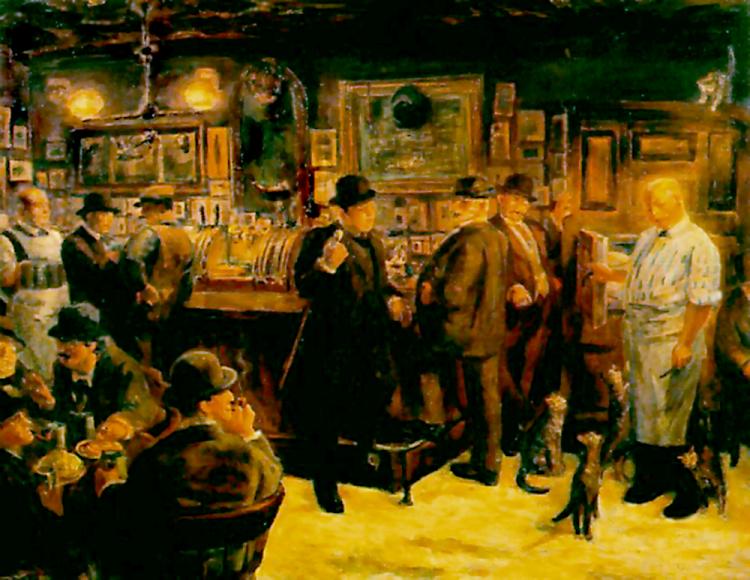 The trip back to New York was as to be expected. A ceremonial cavity search at Denver International Airport was followed by an uneventful flight to LaGuardia Airport, where, as is the custom, a limo driver tried to shake us down for double the normal fare to our hotel. He had as good a chance of chipping into my drinking money as a Central Park wino hitting up the president of the Anti-Saloon League for a fifth of bourbon. We finagled a cheaper ride and, with one averted shakedown under my belt, I felt as if I were truly home.

We walked from the hotel to Macy’s and after an hour of shopping and not buying anything, I grew thirsty. Now, I don’t know about any miracles on 34th Street but we did experience one in a bar called Harp’s on 32nd. It was there that I had the best Guinness of my life. We Americans have long labored under the rumor and suspicion that the Guinness you get in Ireland is a far better thing than it is in America. I don’t know if it’s fresher there or because our supply is brewed in socialist Canada, but everyone I’ve met swears the Guinness in Ireland is far superior. Apparently Harp’s Bar has a pipeline to the Emerald Isle. It was black, rich and sweet, without the hint of an aftertaste. It tasted like God’s own Creamsicle. If I ever drown in a vat of this brew, don’t bother crying at my funeral for I have gone to a far better place.

After investing in a mellow buzz, we made the mistake of taking a rickshaw ride. In case you’ve never had the pleasure of exploring the equation, Rickshaw + New York Street + Fleet of Yellow Cabs Driven By Howling Madmen = Instant Sobriety. We white knuckled our way down to 15 E. Seventh St. where we were unceremoniously deposited before the gates of Drunkard Valhalla.
Walking through the door of McSorley’s is to place your hand squarely in the Palm of History. It’s a small pub, with sawdust on the floor and wood paneling aged with a century’s worth of beer.

Homey yet historic, it seems more a museum that serves ale than a bar. A pair of work boots that once belonged to JFK’s grandfather, a steady patron, hangs in the corner. His famous grandsons — John, Robert and Ted — had all dropped by for a cold one at one time or another. Abraham Lincoln had popped in during his 1860 Presidential campaign and Theodore Roosevelt liked to quaff McSorley’s Ale after a hard day’s work as NY Commissioner of Police. John Lennon, Woody Guthrie, John Steinbeck, Franklin Roosevelt, Babe Ruth, Jackie Gleason, Mickey Mantle and Jack Dempsey have all darkened McSorley’s doors, and standing there now is akin to a visit from the Ghosts of Drinkers Past.

It was time to turn myself into a Ghost of Drinkers Present. I went to the bar and ordered two ales.

“What kind do ya want? Light or dark?” asked the handlebar mustached barkeep.
“One of each,” I replied.

He looked liked he has worked there since 1907 and is cryogenically frozen every night. Four mugs of ale were set before me. The rickshaw ride had eliminated any possibility of seeing double so I knew something was amiss. I soon learned that a long time ago McSorley’s adopted the policy of giving you two beers when you asked for one. They have enough faith in and knowledge of humanity to know you’re going to have more than one beer. You know you’re going to have more than one beer. Woody Guthrie’s ghost knows you’re going to have more than one beer. It’s called a “one and one” and it’s an efficient time-saving tool. Think about how much more efficient drinkers we could be if every bar followed suit. Eventually it turns into an entertaining game of addition: if I decided to stay for a couple, did that inherently mean I would order two or two? Or four? I liked the math. I liked the ale. It’s the kind of math they should be teaching in schools.

And in case you’re wondering, McSorley’s only serves ale. No shots, no mixed drinks, no wine, nothing in a bottle. Just their own ale. That’s the way it’s been for 148 years and they see no reason to change. It’s tasty stuff and if you don’t like it, you better get used to it. They are very proud of their recipe. If it wasn’t good, they would have been put out of business before the Wright Brothers built the airplane. Change is not something McSorley’s is interested in. There is no jukebox. The main entertainments are drinking, people watching and conversation. If that doesn’t appeal to you, you can refer to a sign they have courteously nailed to the wall: “Be Good or Be Gone”.

It was an interesting crowd for a Sunday afternoon, a mixture of tourists, freaks, and locals sitting and drinking and enjoying the day. There was a punk rock guy with spiked hair, leather jacket and multiple piercings. On each of his shoulders sat a parrot.

“Did you ever hear the joke about the punk rocker that sat next to an old man on the bus?” I asked Laura.
“Is the punch line, ‘I got drunk and screwed a parrot once. I think you’re my son.’
“Yeah.”
“Never heard it.”
“Well, I’ll tell it to you sometime.”
“I can hardly wait.”

The restrooms at McSorley’s are even surlier. Their notoriety exists on an international level. The men’s room boasts sickly green tile, two urinals, a toilet bowl and a century and a half’s worth of fumes. The windows on the door are half clear glass and half opaque so don’t worry your head about privacy because there is none. The ladies’ room is another story. Up until 1980, there was no woman’s room, which makes sense when you think about it, because until 1970 McSorley’s didn’t allow women inside the bar. John McSorley thought the combination of men, women and drinking led to fights. Their motto up until then was “Good ale, raw onions and no ladies.” It took an act by the Supreme Court to let women into McSorley’s. And another spiteful ten years to build them a restroom.

If the Smithsonian Institute is America’s Attic, then McSorley’s Old Ale House is its basement bar. A visit there is like a talk with your grandfather after you’ve grown up enough to appreciate it. The burden of being a New Yorker and not having drank in McSorley’s slid from by back and after four or five beers (or was it eight or ten?) we decided to go. I walked out feeling like an innocent entering a modern and corrupt world, haunted by a new and troubling question.

What’s the second oldest tavern in America, and why the hell haven’t I drank there?