When people disagree with the actions of others — let’s say tippling in this case — they work to catch the ear of the powerful and wail to that person or group of the Great Danger at large in the land.

The King or Congress will either listen or not. Such are the vagaries of politics. If the King listens, he issues a proclamation regulating the activity in question. Congress passes laws empowering various enforcement agencies to ticket, jail, or otherwise harass offenders. If the powerful ignore special pleading, the complainants might form a group (a Society, say, or a PAC) and become civic gadflies, buzzing Johnny-One-Notes pounding away to legitimize their opinions, swelling their numbers in a cult-like fashion until the powerful are forced to listen and act.

As long as humans have been aging, brewing, and distilling alcoholic beverages, griping collectives have been trying to put a stop to it. The pendulum has bounced back and forth between prohibition and freedom for thousands of years. Angry Mycenaeans tried to rid the culture of mead. Hellenic fuddy-duddies knee-jerked their way into a fight with wine slurping Dionysians. Confucians cracked down on rice wine, and Buddhists on plum wine. Persian naysayers got all twitterpated over hard drinks made from dates and pomegranates. These are ancient examples, each more than a thousand years old. More current instances are quite well known. Most famous among them is the Volstead Act, passed in 1919 over the veto of President Woodrow Wilson. Generically known as “Prohibition,” the Act criminalized intoxicating beverages (and, not surprisingly, led to an explosion of black marketeering and violence from which we have yet to recover). Even more recently, MADD, a well-organized group of angry mothers with the noble, if somewhat draconian, desire to rid our thoroughfares of drunken motorists. The MADDies anti-alcohol stance has rapidly mutated from its initial focus on a genuine social ill to one that treats anyone who tips a glass as Motorized Death with a hard-on for the Innocent. Yes, hardly a decade has passed in our species’ history where grumps, cranks, or riskless tremblers haven’t waged some sort of “save our children!”, “save our culture!” campaign against booze.

Always keen to avoid being lumped in among society’s weeds, our governing bodies can always be depended upon to acquiesce to the mewling of the most vocal. As often as not, the loudest voices are made loud through the currency of Money, and its partner Self-Designated Moral Authority. For good or ill, it’s easy to attract attention to a cause by attacking the moral shortcomings (real or imagined) of your opponents. Once the activity in question is labeled “unhealthy” or “amoral” (as has alcohol, often enough) too many people cease the activity to avoid the torrent of irate appellations. But, can we blame people who bolt for the hills when they are labeled, and made to feel Part of the Problem?

Of course we can. Lack of a spine is a terrible excuse to go ostrich at the first whisper of bleating sheep. We are free to choose our associates. Trying to avoid being “named” is a small and cowardly species of fear. It is beneath you and your personhood.

But once we decide that turning tail isn’t an option, what happens then? Who is on our side? Who looks out for the drunkards?

Be of stout heart, friends. As mentioned before, opposing sides of the drinking debate ride a pendulum; they win, we win…they win, we win, etc. The world hasn’t always been as squeaky-clean and preoccupied with safety and ripped abs as it seems today. Significant parts of our past, even our relatively recent past, have been known for treating liquor with Love, Respect, and Belief. 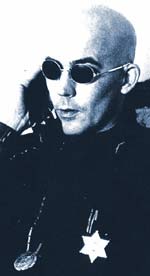 Here is a man, quite influential in his heyday, who made public intoxication (in addition to his famous drug cocktails) a weird kind of personal Art. Attendees at his speaking engagements have witnessed the good Doctor down an entire bottle of whiskey in 90 minutes. One evening in the early nineties he arrived at his favorite tavern outside Aspen to find it crawling with fur coats, designer ski wear, and plasticized members of the moneyed elite – simply the worst sort of people. He returned some time later and lobbed a smoke grenade into the bar, then waited in his car for the rabble to clear so he could have a peaceful drink. Another time, while golfing with Ed Bradley (of 60 Minutes) at the Aspen Country Club, he was knee deep in a bottle of Chivas when he four-putted a par three hole. He took a shotgun from his golf bag and blasted a $100,000 golf green into lunar terrain. This got him banned from the ACC for life, but what the hell…it’s only golf for crissakes. Thompson also ran for sheriff of Pitkin County in 1970, on the Freak Power ticket, and lost by a mere 300 votes. Colorado was this close to a leader for the ages.

Dr. Thompson was one of the last public figures with enough brass to drink extremely, right in the face of his philosophic adversaries. Today’s celebrities hide their inebriation, frightened to show their lives to the public that made them. Thompson has always (and will always) been in favor of our right – not a privilege, not an avocation, but a right, god damnit – to put any substance we want in our bloodstreams. 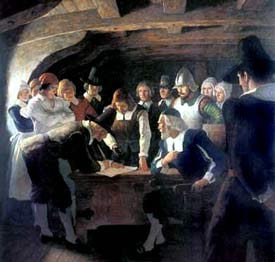 These folks, contrary to a popular belief in their stoicism, looked upon booze with big-time seriousness. In February of 1621, the Mayflower was anchored off Plymouth. The voyagers were ill, many suffering from scurvy and pneumonia, and the leaders grew increasingly worried about a wholesale collapse.

Additionally, as the ship’s diarist, William Bradford, noted, they were horrified that they were out of beer. The Mayflower’s captain generously allowed them to drink from the crew’s supply, but they went at it so greedily he cut them off, lest he and the crew have nothing left to drink on the voyage home. Finally forced to go ashore, the Pilgrims made it their first point of business, after housing, and well before inviting the Indians over for turkey and yams, to begin brewing beer and distilling spirits. Among these buckle-shoed invaders, abstinence was considered a sign of mental dysfunction. Non-tipplers were a poor fit, then as now. Sort of gives those Thanksgiving beers the flavor of history, doesn’t it? 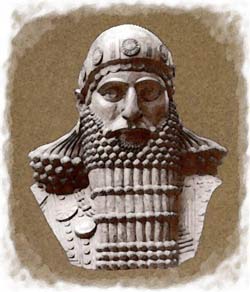 This fine fellow, consolidator and ruler of Mesopotamia around 1600 BC, is most famous today for the legal Code bearing his name. Found in 1901, on a black diorite stele in Iran, the Code lists over one hundred laws for Mesopotamia. We are primarily interested in #108, which protected drinkers of beer and wine. #108 decreed that any tavern keeper caught watering down his drinks was to be put to death by drowning. Word up.

A dishonest, greedy, bar owner would be hauled before a public forum to face his accusers and, if found guilty, got his head forced into a barrel of water and held there until he gave up his ghost. “Dead,” to quote Beetlejuice, “dead, dead, deadsky.” Dead as a door nail. Dead as Paulie Shore’s career. Dead as the guy riding shotgun with Trent Lott in Compton. Dead as Ophelia in the pond. You pour a weak drink, you get executed. Period. End of story.

How righteous is that? All the way righteous, brother, all the way.

Think of the number of times you’ve been victimized by a corporate bartender, one of those guys who’s too neurotic to work at a real bar, and instead plies his trade at Bennigan’s or TGI Fridays, dispensing drinks measured to the Nth drop by a computer. Dionysos save us from the madness of the bottom line! You go to one of those chain places and you get mechanized drinks. The alcohol content of a beverage (a percentage already regulated by the Federal Government so tightly it can hardly squeeze out a burp) is predetermined by the profiteering whimsy of a bunch of stuffed shirts who believe that a thing is only fun when it comes with a marketing strategy. Even the regulars get a math enema. How are you supposed to get sauced when your drinks are, technically speaking, CGI — Computer Generated Images, like Hollywood blockbusters?

Let’s update rule #108, shall we? It’s a must. We drunkards, we sozzleheads, we gindogs, need to get a load on where we can trust the bartender to help us along, not look out for our safety.

First off, let’s not kill the poor schmuck. He’s only making a living, after all, and besides, a mass slaying of bad bartenders is bound to make people twitchy. Instead, let drunkards ridicule the shoddy quality of corporate drinks, dump the wretched things behind the bar for use as mat-shots later in the night. (A mat-shot is probably the only way you’ll get a stiff pour in one of those places anyway.) Furthermore, let us identify those bartenders who might be salvageable and educate them in methods for circumventing their mechanical shackles. Persuade them to change locations. They will then perform a service to the world and their tips will increase significantly. For those who refuse our aid – those weak, silly purveyors of by-the-numbers libations – let drunks and barflies avoid their taverns and pubs completely. We will be the Barley-Hops Amish, shunning with prejudice any adherence to structure and corporate policy. Let us instead throw our cash on those bars that have maintained their individuality and shore up our desire for Fiery Waters. Become an effrontery to the notion that getting ripped has a profit margin. Our body chemistries are sacrosanct. The content of our circulatory systems is nobody’s business but our own. Without the ability to control our own input/output functions we might as well give up any claim to freedom. One of us has it in him- or herself to write a new Code for the new millennium.

Though we live amid the abstemious herd, we can corral them and wrap ourselves in their hides — warmth against the chill wind of the reactionary.¸

(Note: The Author is indebted to the works of Antonio Escohotado, and Mark Lender & James Martin.)