You may have seen Chuck on Comedy Central or playing characters on
Will and Grace and 3rd Rock From The Sun. In real life Chuck plays a drunkard. 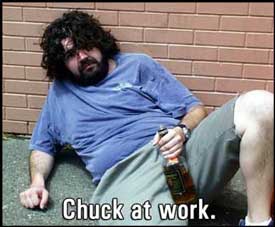 First taste from the well: I was six and my grandparents were visiting. My grandfather was fixing something in the garage and we shared a beer.

The usual: Fat Tire in a pitcher. No glass, the pitcher is barely big enough.

How your drinking impacts the economy: I’ve recently been informed that Comedy Works has to order an extra barrel of Fat Tire every two weeks.

Do you like hard liquor? I should slap you for not knowing the answer. Crown Royal.

Why we must drink: To deal with those weak bastards in A.A. 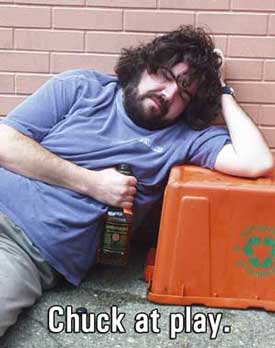 So, you’ve been to an A.A. meeting: Yes, and after three meetings I ended up being gay.

Drinking on the job: I used to warm up Craig Kilborn’s show. If I didn’t show up drunk, how the hell could I put up with that snoozefest?

You`ve got 20 bucks: I head to Trader Joe’s Grocery Store for $3 bottles of Merlot.

What makes a good bartender great: When you order a Blow Job they take you to a back room.

Favorite bar: The one I’m sitting at.

What’s so great about it? It’s got beer, booze and many other fine distractions.

Why most celebrities won’t admit they drink: Southern Californians made it uncool to look unhealthy. Fuck that. You know what’s cool? Puking up your carb-free dinner after pounding bottles of merlot. 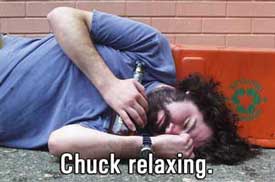 Bukowski said: “When you drank the world was still out there, but for the moment it didn’t have you by the throat.” Do you find refuge in alcohol? Is there another place to look for refuge?

Drinking ritual: Drink hard until I hear “Ladies and Gentlemen, please welcome, Chuck Roy.” Then drink politely so the audience thinks they are more important than booze. Finish set, drink until the audience looks hot enough to fuck.