Just Try Getting Liquored Up on Leno
HOLLYWOOD — ABC pulled the liquor license of its risque new talk show “Jimmy Kimmel Live” after a female audience member vomited near a top exec during the show’s first live broadcast.

ABC had the idea of going after the same key 24 to 35 year-old male demographic Kimmel’s alma mater The Man Show was so successful in capturing, and initially went ahead with Kimmel’s request to serve the audience alcohol and plenty of it.

“It’s always our intent, really,” Kimmel said, joking or otherwise, “to get people as drunk as possible.” 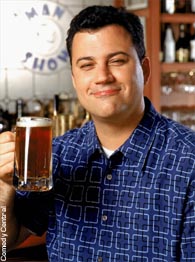 “They thought it was out of control,” Daniel Kellison, the show’s executive producer, said the following day. “People had bracelets (to get drinks), but they perceived it as chaotic.”

The drinking wasn’t regulated to the cheap seats. During the show actor George Clooney passed around a bottle of vodka and Kimmel brought out a quart carton labeled “Goat Milk,” poured shots of clear liquid for himself and guest Snoop Dogg and preceded to get hammered on national television.

“I vomit almost every time I go to Disneyland — they don’t close down Space Mountain,” Kimmel complained after the show’s drinking privileges were yanked.

Censor Goons Pull Plug on Guinness
DUBLIN — The Advertising Standards Authority for Ireland (ASAI), quite possibly the most uptight gang of waterheads on the face of the planet, coerced Guinness into pulling a popular commercial depicting a man walking barefoot across a river of volcanic lava to rescue pints of Guinness from a local pub.
The ASAI ruled the stout was being wrongly promoted as a “source of power”, despite the fact the lava-walking occurred on the way to the bar, and the man was by implication sober at the time.

The authority cited four other complaints about the volcano sequence, including the claim that it somehow insulted victims of real natural disasters.

Other commercials the ASAI cited as offensive include a Carlsberg ad in which a group of males dare enjoy the view of a female construction worker’s cleavage, and a Coors Light ad depicting a late-night drinking game in which the loser has to lick a filthy sock.

Cellphones More Dangerous Than Hooch
LONDON — According to a study conducted by the Transport Research Laboratory in England, motor vehicle drivers’ reaction times were on average 30 percent slower when talking on a mobile phone compared to when they had been drinking alcohol.

According to a different study published in the New England Journal of Medicine, the risk of getting into an accident while driving and talking on a cell phone is equal to driving with a blood alcohol content (BAC) of .10 percent (the current DWI arrest level in most states). The crusade to establish .08 BAC as the uniform “drunk” arrest level would have you in jail for behavior statistically safer than using a car phone.
Surveys show as many as four out of every ten drivers admit to using a mobile phone while driving. Direct Line Insurance, which backed the commission’s research, reported that this ratio exceeds those who admit driving while illegally intoxicated, which comes to about a fifth, no pun intended.

Ninety percent of people who talk on cell phones admit it is dangerous, but only 30 percent believe a cell phone ban would be obeyed.

Drink Booze, Live Forever
EVERYWHERE — A wave of new studies exhorting the health benefits of drinking alcohol continue to flood in, including:

In a study of more than 80,000 American women, those who drank moderately had only half the heart attack risk of those who did not drink at all, even if they were slim, did not smoke and exercised daily. Moderate drinking was about as good for the heart as an hour of exercise a day. Not drinking at all was as bad for the heart as morbid obesity.

In a study of thousands of middle-aged Danish men with high cholesterol, moderate drinkers had a 50 percent less risk of developing heart disease from blocked arteries than abstainers.

Among more than 100,000 California adults, moderate drinking after age 40 was associated with reduced death rates during every subsequent decade of life — in some people by as much as 30 percent.

A large study from the Netherlands reported in The Lancet medical journal early this year showed that moderate drinkers over age 55 had about a 40 percent lower risk of developing dementia than nondrinkers, possibly because they were spared the multiple small strokes, which can mimic Alzheimer’s disease in the elderly.

Recent research has shown that alcohol can benefit other organs as well as the heart. Moderate drinkers seem to have fewer strokes that result when the brain’s arteries become clogged with fatty deposits. They are less likely to develop fatty plaques clogging the large arteries to the legs, which can lead to incapacitating leg cramps, gangrene or, at worst, amputation.

ABC medical consultant Dr. Timothy Johnson lists “Drink Alcohol in Moderation” as #3 in his top 12 list of Men’s Good Health Choices. Based on his new book, Dr. Johnson ranks his recommendations in order of importance. The health expert stresses the role of moderate drinking in reducing the risk of coronary heart disease, which is the number one cause of death in the U.S.

Drinking Customs Staunchly Enforced In Texas
TEXAS — A jury in Bandera, Texas gave a life-in-prison sentence to a man who fatally shot a friend he accused of drinking the last beer in his refrigerator. “There was only two beers left, so I took one, and told Willie not to take my last beer,” Steven Brasher, 42, said in a taped statement that was played during his trial. Testimony showed Brasher shot Willie Lawson, 39, in the head Nov. 5, 2001, after the two began arguing over the missing beer. Brasher said it was an accident.

Man Confuses Cops With Cocktail Waitress
SOUTH AFRICA — A thirsty South African demanded a bottle of beer as a ransom after claiming he was holding three people hostage. The man told police he had a gun, was holed up in a house with a teenage girl and her parents and would release them only if they gave him a beer. After a six hour stand off police broke into a house to find that the gun was just a toy and that there was no one in the house besides the man who just wanted a drink. Police spokesman Ntobeng Phala said: “We called in the tactical intervention group, then the serious and violent crime unit and later our hostage negotiators from the province, but the guy refused to budge, even after we brought him the bottle of beer that he demanded.”