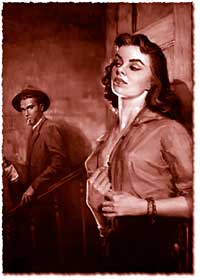 Well, here you are. It’s over.

It’s probably been coming for some time, but being the romantic sap that you are, you thought you could make it work. You hung on like a punch-drunk boxer way behind on points in the final round. But pride can carry you only so far when the right hooks are screaming in like cannonballs. To quote the late great Charles Bukowski you are “the champion who quit on one knee.” Helluva fight, kid. Better luck next time.

To again quote Bukowski, “Love is a dog from hell.” This dog is vicious and altogether unmerciful. It will rip you into small pieces and lick at your wounds with a steel-wool tongue. This filthy hound clamps its jaws around your heart and squeezes like a vice grip.

It’s like when a roller coaster plummets down the steel incline and your stomach ends up wrapped around your left shoe. The pain is unspeakable. Maybe she cheated on you. Maybe you cheated on her. Whatever the circumstance, it’s over and done with, and you’re in deepest, darkest, hottest Hell.

This is a fact: A broken heart hurts worse than a broken leg. The pain of lost love is that itch, that horror that no drug can touch. Except one.

Sweet, ever-loving booze, and plenty of it.

Booze is your friend. You already new that, but now more than ever. When you really need a friend in a high place to hear you as you pray for the salvation of your soul, reach to the top shelf for a hand up from Jameson or Maker’s Mark. If you need some reassurance that it’s really all for the better, place your palm to the middle shelf and slap five to Wild Turkey and Jim Beam. If you want to cuss and moan about what a stinking lying bitch whore she is, lick your knuckles and brawl ‘til you’re broke with Evan Williams and Old Crow.

This is a crucial time in your life. It is a test of strength and will. Can you be strong enough to overcome the crippling foe? Can you be resilient enough to withstand an urge to go back into situations that cause you pain? Yes. But you’re going to need help. 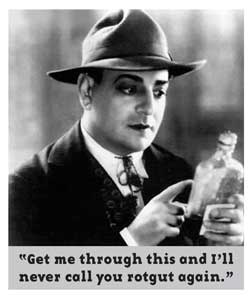 These faithful comrades will stand by your side and pick you up when you fall down. You must face each day with a full flask in your pocket and a song blaring in your head. This is the essential task you must perform in the long rite of taming a monster. The rabid Rottweiller that clamps down on your corazon is in for a long-due cheap shot. Through the two aforementioned mediums you will achieve a horrible headache, but the throbbing in your head confuses the dog—he starts thinking he’s gotten hold of the wrong organ and shifts his grip to your brain. This offers temporary relief from heartache as your head takes one for the team.

But the dog is no dummy. He will soon realize his mistake and latch back on to his previous prey. This is why you, fallen soldier, must forge ahead. There is no quick end to this fight if you’re playing for keeps. The truth is you love her and probably always will. However, if you want to fully recover from your lacerations so that you can someday feel normal and wholeheartedly in love again, you must pass through the following phases:

You’re doubled over in pain. If you sleep at all it’s in a fetal position. Eating and personal hygiene have been temporarily suspended to conserve the energy needed to fight the pain. Forget about glassware, rocks and mixers. You’re belting straight out of the bottle, baby. I’d recommend Evan Williams or Early Times and let us not forget some appropriate albums: That’s Life by Frank Sinatra and Blood on the Tracks by Bob Dylan should soothe the sting. Just think, when Bob wrote “Simple Twist of Fate” he knew exactly how you feel. Trick that dog, buddy. It’s the only chance you’ve got.

You’re getting stronger. The constant effort involved in fighting pain has brought out a hardness in you that you didn’t think was there. Day before yesterday you ate a whole cheeseburger all by yourself. You’re bathing again.

Now that you don’t smell like an old sock you start thinking about looking for the Rebound Girl. Don’t do it. Chances are it’ll only make you feel worse as you try to pass the weight of your pain onto her. Here’s the secret: the pain doesn’t go away. You merely get used to it by numbing it with liquor. As your tolerance to alcohol builds, so too does you tolerance to emotional anguish. You get used to the burden, your emotional muscles strengthen, like a coal miner shouldering bags of coal out of a mine shaft for weeks on end.

You look in the mirror and start to recognize someone. You think to yourself: “Man, if I get through this I will be the toughest motherfucker around.” Damn straight, pal. Speaking of which, it’s time to go on the rocks or maybe mix your Mash with water or Coke. No more need for rotgut, move up to the middle shelf.

You’re getting cocky. Your respective diets of food and sleep are resembling something like normalcy. Your steady intake of whiskey has been augmented by beer, wine and other libations. You can stand up straight and have fooled your friends into believing you’re totally over that chick.

Not so fast, old boy. The Dog From Hell is a tenacious little bastard and still follows you everywhere you go. He may be hanging back a bit, but when you least expect it he’ll leap up and latch back on with more fury than ever. One brisk winter evening you turn around in a bar and there’s your ex making out with some chump in the corner. The fact that you know the bastard makes the sudden nausea and hot flash all the worse. You start to tremble and burn with rage. Don’t kick his ass. Even though he probably deserves it for one reason or another, the fight is not between you and him. It is between you and you.

After you get the hell out of there you’ll suffer a short relapse falling somewhere between phases 1 and 2. Seek out your friends. Big bold shots  with your chums will help you regain lost ground within a few days. Give these albums a spin: Powerage by AC/DC and The Allman Brother’s Band by you know who. The songs “Kicked In the Teeth” and “Whipping Post,” respectively, should make you feel right at home. This is sink or swim time. Face your pain. Tame your pain. Learn from it and someday you will own it, control it and make it work for you.

Phase Four: Month 8  and Beyond

The lessons you’ve learned are extremely valuable ones. You tread more cautiously. You understand your weakness and hold your guard up high with the neck of a bottle in each fist. You’re starting to get back in touch with the person you were before lost love shoved its fangs through your chest and your guts spilled out on the floor.

Relinquish yourself to the fact that you love your ex, she’s gone and all you have left is this mutt that adopted you and won’t leave. However, now you are the master—having loved and lost and lived to tell the tale over a couple of drinks. You were in touch with your emotions previously, but after this trial your ability to feel deeply will have crystallized to a sense as sharp as a whip. You can appreciate the work of dedicated distillers and gifted songwriters alike in ways you never before imagined.

You did it. You tough sonuvabitch.

The Soundtrack of Sorrow

The author finds it necessary to consult the expertise of tattoo artist Jef Kopp in completing this article. Mr. Kopp has a music collection bigger than most record stores and a knowledge of the subject that sends the snotty little brats that work in them crying back to mommy. Here are our picks for some of the top break up albums of all time and the recommended liquor to guzzle while listening.