Inebriate Savant Shorts McGraw reveals the secrets of time travel, killing the voices, and why the wheel in the sky must keep turning. 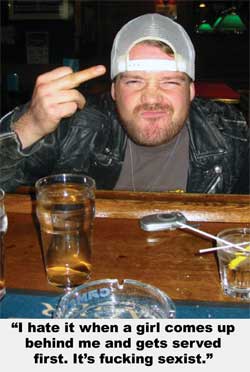 First taste?
I was about five. My parents threw a party and everyone passed out. I got up early and started drinking the cups left on the floor. By the time my dad got up I had my own party going.

When you joined on the pro drinking circuit:
When I got my driver’s license at 16. I was on the Flo-J. That’s when you drink a forty of Old English down to the label, then fill it up with OJ. You can hammer the fuck out of a Flo-J.

Drunkest ever:
Juarez, Mexico. I was on a classic bender. I was waiting in a parking lot for a girl and the cops came by and kept asking me where I was from. I told them 1997.

You can time travel?
Only when I’m blacked out. Since I’m not really there, technically, I save and store that time. People tell me it’s Tuesday and I think it’s Saturday. 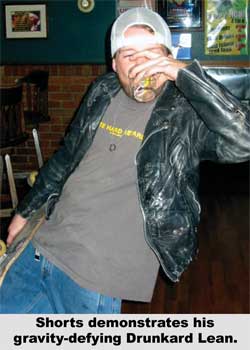 Who taught you to drink? Your father? Friends?
My father and his friends. He taught me lots of tricks. For example, my father and I were driving home from a bar once and it was all foggy. A cop pulled him over and he very quickly switched places with me. I was about six. The cop laughed and said, “Get this kid home, now.” So we drove back to the bar.

When to say when:
When they throw me out. As long as the bar let’s me stay, I’m drinking.

Original recipe:
The Wheel in the Sky, my Journey tribute drink. Mix every shade of rum and Blue Curacao. Garnish with a round orange slice. The wheel in the sky keeps on turning, and I don’t know where I’ll be tomorrow.

Favorite bar:
Double Down Saloon in Vegas. It’s not your average evening. I stop there every time I pass through town. 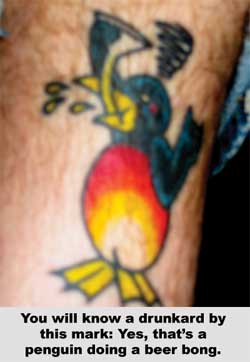 Best 86 story:
I was at the Lion’s Lair and this guy on stage was giving away a skateboard deck. He was saying, “Who’s punk and drunk enough to catch this board?” I was definitely both, so I leapt over the bar—put my foot through a beer cooler—grabbed the deck and ran outside. But it was freezing so I had to go back in for my sweatshirt. I tried to fix the cooler, but it was fucked, so they made me leave. Kept the deck though.

Perfect drunk:
Kegs in the infield of the Talladega Speedway in Alabama. Party with the white trash girls, then an afterhours with the drivers and the race car chicks. Because they’re hot. Super hot.

Why you must drink:
To kill the voice in my head. It sounds like a big fire.

Trick of the trade:
The Stuntman. I learned it from a marine. You get a shot of tequila, some salt and a lime. You snort the salt, shoot the tequila and squeeze the lime into your eye.

Words to drink by:
What a sober man thinks a drunk man says.