Why do you drink so much?

Circular: I’m trying to make up for your disgraceful lack of effort.

Compassionate: With the economy the way it is, do you really want to put fifty brewery workers out of work? Who’s gonna feed their families? Think about the children, damn you!

Historical: James Beauregard Beam saved my great great grandaddy’s life during the Civil War. I wouldn’t even be here if it wasn’t for him. It’s the least I can do.

Patriotic: Because Bin Laden doesn’t want me to.

Religious: Jesus said his blood was wine and I’m trying to get closer to the Lord, you godless swine.

Are you hungover again?

Defensive: You try mixing Thunderbird and rotgut bourbon and see how you feel. 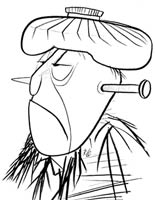 Disdainful: Something has to fill up those nasty little valleys between benders.

Literary: Between grief and nothing, I choose grief!

Optimistic: Not as soon as the four bloody marys I had for breakfast kick in.

Politically Correct: Hangover is such a hurtful word. I prefer Post-Party Syndrome. I’m the victim here.

Rational: Listen, to get a hangover you have to get drunk. And there’s no way that twelver and bottle of Jack got me drunk.

You’re fired, you no good drunk!

Businesslike: Can you send my severance check to 8th Avenue Liquors? They’ll know what to do with it. 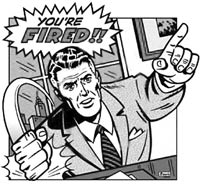 Congenial: Okay, but I’m pretty sure I’m blacked-out right now, so can you call me tomorrow and remind me?

Contrary: For your information, I happen to be a very good drunk.

Disappointed: Oh great, and I just poured my best bottle of vodka in the water cooler.

Grateful: I guess this gives me a shoddy excuse to embark on a weeklong bender of hard drinking, dire self-examination and monstrous self-pity. I love you, man!

Opportunistic: Fine. Now, how about that farewell cocktail?

Spiteful: I was only using this job as a bar tab reference anyway.

Vengeful: I won’t miss you, but I will miss screwing your wife at the company parties.

When are you coming home?

Playful: A house is not a home, and I will return when I’m housed and you’re not home.

Rhetorical: When do the bars shutter their blessed doors? When do the after-hours parties sing their last sweet song? When does the drunk tank’s cruel walls fall and the eager doves fly free?

Agreeable: I’ll be anything you want me to be, so long as you’re buying.

Complimentary: When I’m drunk you’re a beautiful and charming human being! When I’m sober you’re a hideous and obnoxious monster. See how that works?

Historical: That’s what they used to say about Winston Churchill. Right before he kicked Hitler’s ass.

Optimistic: No, I’m not. But check back in fifteen minutes.

Philosophical: Drunk is such a relative word. Does anyone really know where it begins and ends? Isn’t it a little outrageous to condemn loved ones with murky concepts we barely understand? Aren’t you the real problem here?

Vindictive: Drunks live longer than teetotalers, and at all costs I must achieve my lifelong dream of dancing on your grave.

Why do you have to drink every night?

Defensive: I don’t get drunk every night. Sometimes I pass out before the sun even gets close to setting.

Logical: Because that’s how you get drunk. Duh!

Misdirectional: Because a night without booze is like a day without sunshine, except you can still get drunk when it’s cloudy.

Rational: Because the daytime bartenders are stingier.

Rhetorical: Why do the birds sing? Why did happy hour start five minutes ago? Why don’t you loan me twenty bucks?

Agreeable: Sure, so long as the meetings finish up before happy hour.

Financial: Do you realize how much those damn coins cost?

Patriotic: Did Churchill give up during the Blitz? Did FDR surrender after Pearl Harbor was bombed? If it was up to you I’d have to drink schnapps and sake every night!

We’re all very disappointed in you.

Contradictionary: Disappointed? Disappointed! Do you know how many drinking contests I won last night?

Defensive: Hey, the only name I saw on that bottle was Jack and your name is Mary.

Entrapped: Hey, buy a better lock for the liquor cabinet. That flimsy piece of crap is a blatant invitation to larceny.

Irrational: I’m trying as hard as I can. Do you realize how hard it is to stay drunk without a job?

Keep this up and you’re going to end up a wino.

Defensive: Hey, some of the greatest drunks of history were winos.

Foresightful: Yep. I got my sparechange rap all worked out. Wanna hear it?

Philosophical: Is it really such a bad life? I mean, no rent, no boss, no problems! Don’t think hobo, think hobohemian!

Semantical: I prefer to call it Xtreme Urban Camping.