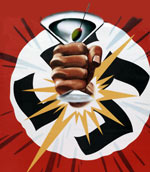 5 On the Road published. Barhop like Cassady and Kerouac. Cheap beer.

6 Read a Book Day. See if they have a bartender’s bible behind the bar. Flop the guide open and see what you get.

7 Keith Moon overdosed on drugs prescribed to combat his alcohol problem (1978). Well, it cured his drinking. Booze, hold the drugs.

8 Star Trek debuts (1966). Kirk and his lusty band of drunks are unleashed on the universe. Romulan Ale.

9 Horned Dance Festival (Pagan). Ah yes, the horned dance. You know the one. Sex on the Beach.

10 Buy a Regular a Drink Day. Wonder who came up with this one. Cheapest draft. 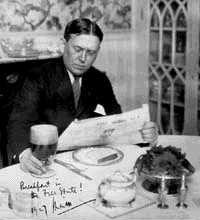 13 National Peanut Day. And you know what goes with peanuts. Draft beer.

14 Slaughter of the Pig at Santa Maria delle Grazie (Italian). When the Italian’s have a pig roast, they really do it up. Negroni.

15 Feast of Our Lady of Sorrows. Perk her up by picking up the tab. Whatever the lady wants.

19 Feast of Thoth (Egyptian). The god purported to have taught the Egyptians how to make beer. Pyramid Pale Ale.

20 Alexander the Great’s Birthday (256 BC). Conquered the world while on a bender. Tequila Alexander.

21 Swiss National Yodeling Festival. You never know until you try. Longneck bottled beer (to defend yourself).

23 John Paul Jones victorious (1779). Declare, “I have not yet begun to drink!” at last call and see how far it gets you. Boston Lager.

24 F. Scott Fitzgerald’s Birthday (1896). “Sometimes I wish I’d went through those good times stone cold sober so I could remember everything—but then again, if I ‘d been sober the times probably wouldn’t have been worth remembering.” Champagne Cocktail.

25 William Faulkner’s Birthday (1897). “There’s no such thing as bad whiskey. Some just happen to be better than others.” Well whiskey.

28 Drink As Much Beer As Possible Day. Started in Milwaukee, natch. Case of Old Milwaukee.

29 Festival of Tezcatzonctl (Aztec). All Hail the Chief Aztec God of Intoxication! Tequila.

30 Cheers debuts (1982). “Terrorists, Sam. They’ve taken over my stomach and they’re demanding beer.”—Norm. A trough of beer and a snorkel.