This drunken son of Cleveland may find his drinking heroes in the past, but for hope and inspiration he looks no further than his next glass. 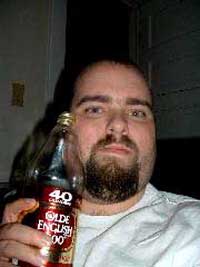 Who taught you to drink: A woman named Claire, I was 16, she was 22. She taught me to bong beers and shoot shots like a man.

The usual: Gin and tonic to start, then lots of tequila, tons of Pabst, until I want to sing or dance. Generally, I’m ushered home at that point.

Can sober people be trusted? Yes. One of my oldest friends has had maybe three drinks in his entire life and he’s the tops in my opinion. It doesn’t matter if you don’t drink, so long as you leave me alone when I do.

Cleveland’s best bars: It’s a tie. The West End Tavern, just a nice joint, good ratio of women to men, strong cheap drinks, and a great staff, some of which I’m lucky to know. And the Merry Arts Bar about a mile down the road, great food, cheap drinks, great bartenders who warp the laws of time and space on the four-count.

Four qualities every bar should have: 1.) The ability to change the channel. If you’re going to think I’m crazy for reading, let me at least watch something good on TV. 2.) A reasonable booze selection. I’m not asking for much, but if I do ask for a mescal and a Pabst, don’t look at me like a gunshot victim. 3.) Darkness. Light is evil. 4.) Decent food, it doesn’t have to be four-star, but good bar food makes all the difference

You’ve got a million: Buy a small Scottish distillery, live in a small back room, and while away my happy life. What else could you need?

The coming revolution: I honestly feel a shift happening, younger guys are starting to see through the shit and move on. We have no celebrity avatars to look to, all our heroes are dead. This is one of our tenets; we rose up against all their hypocrisy by learning from the avatars of the past. I’ll tell you one thing, much like wearing a kilt, being a drunkard will be accepted, we just have to keep doing it and reject bad stereotypes while doing so. The greatest men of history were drunkards, and we just might be great if we mobilize.

You’re teetering on that fine line between blitzed and totally and irrevocably fucked up:   I order a 151 Ways To Die. As Hunter S. Thompson said, “Anything worth doing is worth doing right.”