First taste: My grandfather gave me a glass of Oban at the age of seven. He was a lovely man. He taught me pretty much all I know about whisky.

First time around the bend: With my father at the age of 13. When his oldest brother died. He treated me as a man for the first time. We split a bottle. I was quite sick after. But it never stopped me.

The exquisite beauty of the Hungarian drinking culture: It isn’t hidden. If people want to drink at their desks at 7am, so what? So long as the work is done. Hungarians traditionally wake up with a shot and a glass of wine. Nobody views drunkenness as bad or unlawful behavior.

What pays the bar tabs: I am a gentleman of leisure. I was fortunate enough to be wounded in service and so have a military pension. 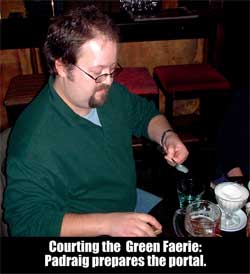 Boozing in Bosnia: I learned to never pass up a drink, as it could be your last.

Adventures with alcohol: The local Bulgarian mafia boss was having a birthday party in my local. He fancied himself a drinker. He insisted that I join him at his table. Bulgarian tradition insists that the birthday boy buys. He tried to outdrink me. We reached a stage where he was puking drunk. His boys were curiously preoccupied, so I put him over my shoulder and carried him home. When I got back and carried on drinking there was some awe. I have been curiously untroubled by burglary since. And they still buy me drinks.

The value of solitary drinking: Drinking alone has a wonderful charm to it. It is a marvellous opportunity to spend some time with one’s own psyche and a shit sight cheaper than an analyst.

Surefire hangover cure: Ice-cold vodka. Straight from the freezer. Goes down like water. Settles the stomach, eases the head and relaxes the muscles. 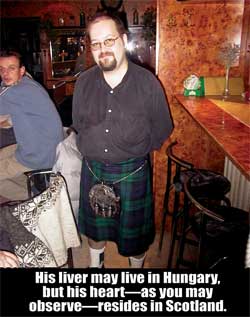 Absinthe vs. regular alcohol: The separation is the world and a biscuit. A drink is a drink, and we all know how to deal with a drink. Absinthe is a drink removed. A harken back to the old days of mystic potions.

Oliver Reed said, “You meet a better class of people in pubs.” I agree wholeheartedly. There is no better way to gauge a country than by its bars. In a bar no one will lie to you save over money. If you want a true opinion, go to a bar. Every one else has an agenda.

Your gift to the cause: The Bloody Nasty (Unicum and pepper vodka) and the Rambling Insanity (Jägermeister, tequila and absinthe).

A typical night: It depends. If I have just awoke, then a pint of 50/50 vodka and orange. A wee beer with a vodka side repeatedly, a few whiskies, a bourbon if I’m feeling exotic, a gin or several, always pálinka (a Hungarian fruit brandy), a Unicum or two (to stave off tomorrow’s stomach gripes), and round the day off with absinthe. Then home for a wee massive drinkie until the carpet beckons.

Why must we drink: It is the only sane resolution in a world gone mad. And let’s face it, it’s fun.