He’s big, he’s bald, he’ll drink you under the table, he’s the reigning champ of Clash of the Tightest Drinking Contest.

What pays the bar tabs: Bouncing and charm. 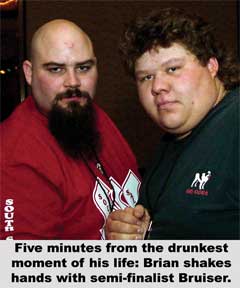 The usual: Dark beer by the pitcher and Beam and Coke. I’m a beer guy. Beer is like the friend you made on the first day of kindergarten that you still keep in touch with.

How much do you drink on a typical booze up: I stopped counting a long time ago but a typical tab at $2 a drink will go $30-$50.

Drunkest ever: During the MDM Clash of the Tightest bout against Bruiser. My 25th birthday ranks a distant second.

Ever been thrown out of a bar? I was once thrown out of a dance club that’s no longer in business called the Albatross. I was asked to leave because I was “too drunk.” I’m not sure what that means but they seemed to think it was a bad thing.

Surefire hangover cure: I’ve only had one hangover in my life. I tried to cure it with moonshine and beer, but what seemed to work best was a bottle of Pepto-Bismol and a tall drink of water.

Favorite bar: Any place I know the bartender.

Best qualities in a bartender: Experience and good conversation skills. Little else is important.

Four qualities every bar should have: Outside of being dark and serving alcohol, nothing else matters. 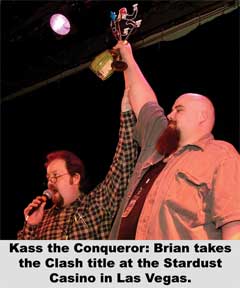 You’ve got a million: Me and a couple dozen of my closest friends are getting sloshed at my new bar.

Would rather drink with God or the Devil: God, because I like to drink with new folks and I’m pretty sure I’ve gotten sloshed with Old Nick on more than one occasion already.

Music to drink by: Johnny Cash.

Why you must drink so much: I have a very competitive nature.

What to do when teetering on that fine line between blitzed and totally and irrevocably fucked up: Shots.

Advice for prospective entrants into the next Clash of Tightest competition: Train early, train hard, and after you win, puke.

Your winning strategy: I relied completely on instinct and mass.

Do you plan on defending your crown at the next MDM Convention?: No, I made a really good retirement speech that I didn’t recall until I saw the tape. I believe one reporter even called it “touching.” It’d be a shame to dishonor that.