He was certainly the funniest. Most famous for his creation of Bertie Wooster, the lovable if vapid rich young man of many cups, and his Gentleman’s Personal Gentleman (or valet, if you prefer) Jeeves, whose main job is, by sheer brain-power, to extricate the Young Master from innumerable scrapes.

During his long life (he died, working until the end, in 1975 aged 93), Wodehouse was prodigiously prolific: turning out more than 100 novels and 300 short stories, as well as innumerable plays, articles and song lyrics. It would nearly take one longer to read the collected oeuvre than it took Wodehouse to write them.

With regard to booze, Wodehouse lived and worked in a far more relaxed world than today’s constipated politically-correct society and he exploited that boozy atmosphere to marvelously-amusing effect.

In a sort of concordance called Wodehouse Nuggets (1983), chronicler Richard Usborne makes great sport by identifying 30 of the Master’s wonderful similes for being plastered or hungover. There are too many to quote in full, but the highlights include:

“Insidious things (mint juleps). They creep up on you like a baby sister and slide their little hands into yours and the next thing you know the Judge is telling you to pay the clerk of the court $50.”

“If you want real oratory, the preliminary noggin is essential. Unless pie-eyed, you cannot hope to grip.”

“The barman recommended a ‘lightning whizzer’, an invention of his own. He said it was what rabbits trained on when they were matched against grizzly bears and there was only one instance on record of the bear having lasted three rounds.”

“He woke next morning on the floor of his bedroom and shot up to the ceiling when a sparrow on the windowsill chirped unexpectedly.”

“He tottered blindly towards the bar like a camel making for an oasis after a hard day at the office.”

Geoffrey Jaggard, another Wodehouse chronicler, in his Wooster’s World (1967), details a vast and sparkling array of the Master’s synonyms for the state of being deep in one’s cups. These include (sit back, pour yourself a stiffish one, and savor this vast vocabulary):

Under the surface; Completely sozzled; Fried to the tonsils; A tissue restorer; Full to the back teeth; Lathered; Suffering from magnums; Not to mention:

Lit a bit; Shifting it a bit; Mopping the stuff up; Off-Colour; Oiled; Ossified; Pie-eyed; Plastered; Polluted; Primed to the sticking point; Scrooched; Squiffy; Stewed; Stinko; Tanked to the uvula; Tight as an owl; and Under the sauce.

A few last quick ones?

Whiffled; Woozled; Awash; and, finally, the Green Swizzle.
Inevitably, all that lathering led to more than a few rough mornings and Wodehouse identified six varieties of hangover, namely:

The Broken Compass, the Sewing Machine, the Comet, the Atomic, the Cement Mixer and, of course, the Gremlin Boogie. 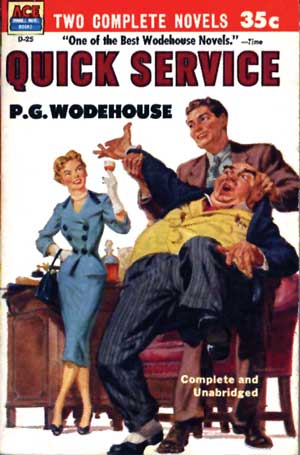 One of Wodehouse’s most sublime passages, ranked justifiably by Jaggard as “unquestionably one of the finest pieces of sustained humor in the language” is the episode in which Gussie Fink-Nottle is selected (faute de mieux) by Bertie’s Aunt Dahlia to hand out the annual prizes to the schoolboys at Market Snodsbury Grammar School.

Understandably nervous and unaccustomed to such a chore, Gussie gets entirely plastered beforehand—affording Wodehouse the opportunity to put to page one of his funniest-ever scenes in literary history.

His Olympian intellect aside, Jeeves is famous for two especial drinks. One is a corpse reviver for young men inflicted with what Wodehouse delicately calls “a morning head.” Wodehouse does not specify, but avers that this concoction will cure anybody short of an Egyptian mummy. The epitome of modesty, Jeeves confesses to Aunt Dahlia that he has never actually tried it on a corpse.

From what one gathers, it is a species of Bloody Mary fortified with unusually generous amounts of red pepper, Worcestershire Sauce and egg yolks.

Its initial, but only momentary disadvantage is to cause the eyeballs to pop from their parent sockets and to ricochet off the opposite wall. After the first sips, as Bertie puts it, “It felt as if someone had touched off a bomb inside the old bean and was strolling down my throat with a lighted torch.”

But after that, full health is restored and young gentlemen are ready for a luncheon of a dozen lamb chops and a battered pudding. “Young gentlemen,” Jeeves informs Bertie, “have told me that they have found it extremely invigorating after a late evening.”

Jeeves’ second select concoction is a cocktail which he terms the Special. Bertie calls it “rare and refreshing” and notes that it will turn a lamb into a lion and, indeed, vice versa. Maddeningly, Wodehouse offers no clue whatsoever as to the contents of the Special. I think it the solemn duty of each generation of Wodehouse scholars to attempt to solve this greatest of literary and spirituous puzzles—in my mind, far more important than the puzzle of who actually wrote Shakespeare’s plays.

Jeeves’ grave and sage philosophy towards booze is encapsulated perfectly at the end of another Wodehouse story. To extricate the Young Master from a fearful fracas at a country house visit, Jeeves finds it necessary to explain that Bertie was in fact under the clandestine observation of Sir Roderick Glossop, the eminent “nerve specialist” or loony doctor.

Bertie is appalled to learn of this and, minutes before the dinner gong, demands of Jeeves how he can go down to dinner when the other ten or so country house guests believe that he is off his rocker.

But you can’t rattle Jeeves.

“My advice, sir, would be to fortify yourself for the ordeal.”
“How…?”

“There are always cocktails, sir. Shall I pour you another?”