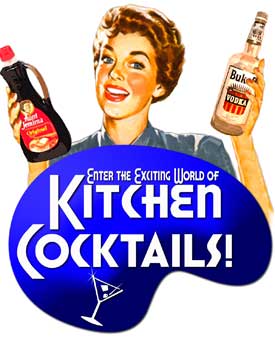 We’ve all been there.

You’re broke, it’s three in the morning, and you’re not quite ready to go nighty-night. You make a quick but intense search of the household and discover all you have to keep you entertained ‘til the wee hours is a half bottle of bargain basement vodka your roommate made a very lackluster attempt to hide.

Now, if it were a bottle of whiskey you discovered hiding in the steamer trunk buried under a boxed weight set in your roommate’s locked closet, you’d be perfectly happy. Even the meanest brand of rotgut can be made agreeable with enough ice and water.

Cheap vodka and water, however, tastes just like watered-down cheap vodka. And the lower-end brands don’t exactly stand alone so well. If you had something to mix it with, all would be roses, but there is not a mixer in the house.
Or is there? March yourself right to the kitchen, my drunken friend, because all the mixer you need is right at your trembling finger tips. To wit:

I can tell you it took a great deal of steely-nerved determination to get this one right. Pasta sauce is deceptively sweet, and you need just the right amount of salsa. If you add too much, it ends up with a disconcertingly chunky texture, bringing to mind something that violently exits out of a drunkard’s mouth. Furthermore, a gentleman should never chew his drinks.

This is surprisingly tasty. It doesn’t exactly measure up to its inspiration, but it’s a damn fine variation. On a side note, you will find vanilla extract an excellent masker of failed experimentations. Just lay it in until it’s all you can taste.

Add a little water to the jelly jars, shake them violently, then pour and, if necessary, scrape as much fruit nectar as you can into a blender, if you have one. If you don’t you’re going to have to shake the hell out of it. Add the vodka, blend it up, and you’ll find you are in possession of a very watery cocktail. This is where the potato flakes come into play. Lay them in and blend it up. It will thicken nicely. Serve with or without ice (depending how thick it gets.)

While the flakes may seem a foolhardy addition, you’ll be pleasantly surprised to find you can barely taste them. It’s not the most delectable cocktail in the world, but it will keep you interested enough to finish it.

If you find yourself flagging at night’s end, you may want to try this eye-opener. Your first impression will most likely be: My God yes, this is waking me up. You’re second impression most likely be, vodka and coffee don’t play so nice when they’re on an unchaperoned date. Just keep adding cream and sugar until your gag reflex settles down.

This is actually much better than it sounds. The tang of the mustard overwhelms the vodka’s belligerence very nicely.

Southern Skid
1 oz Vodka
1 oz Barbeque Sauce
Dash of olive juice (you may substitute Worcestershire sauce, steak sauce or almost any other kind of sauce)
Stir or shake thoroughly, serve as a shot.

Sludgy and sweet, with a bit of a tang, you may find it a tad thick for a shot. If you heat it up a little however, it thins very nicely.

This started as a spirited attempt at a hot-buttered rum mutation, but didn’t come off as well as one might have hoped. By adding milk, however, you end up with something reminiscent of mom’s spiced oatmeal. A really mean mom.

Not something you’d want to nurse in front of a roaring fire, but as a shot the Warsaw Waffle is just plain delicious. It’s no surprise that this is an actual long-standing existing recipe, reputedly invented by those ever-improvising Poles (hence the geographical ringer).

Salty, spicy and undeniably bold, this cocktail will put hair on your chest and a song in your heart. An angry, brutish, death-metal sort of song, mayhap, but a song nevertheless.