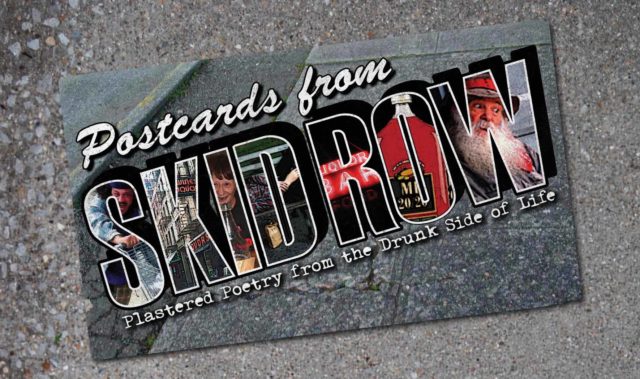 Kessler’s Whiskey
Kessler’s whiskey on sale!
It’s the same price as the no-name whiskey
that occupies the space next to it on the bottom shelf.

As soon as i walked in the door of my apartment
with my 1.75 liter plastic jug
I checked the internet reviews.

But who gives a fuck about properties
of nuttiness or caramel?
If I want nuts and caramel
I’ll get a candy bar.
All I want to do is get drunk.

WEATHERING THE STORM IN THE DRIFTWOOD BAR

like an old pond nobody knows
how many people drowned in.

and gets change from the bartender.
It’s hard to tell if she’s crying

or just wet from the downpour. 8 frog eyes
follow her to the pay phone.

A middle-aged man comes in
and sits down next to the two others,

says, Hi, I’m Les,
and now we’ve finally got something

to talk about:
forget the soaked woman

pushing quarters into the payphone
like a slot machine

and the rain coming down
like a jackpot in hell,

we’ve got this strange marvelous thing
here before us:

I’ll have what he’s having
A gin and tonic sits at the bar
Nobody sees her, because she’s everywhere
Three tequilas shoot loudly
While a scotch rocks taps his fingers
Looking at someone who just isn’t there
A martini checks his watch
Does he have the wrong address?
A cape cod looks up from her phone
Then back down
A neat whiskey doesn’t want to talk about it
And the old man sleeps
Dreaming a different nightmare
Next to him a champagne flute sings
A strange green tune
Death in the afternoon
—Chris Gerrior

Hoppiness
I’d rather eat a ghost pepper whole
than sip the bitterness of IPAs.
Having learned not to take flavor for granted,
I know most beers at my Stop-N-Go
taste like metal and cold water (Shaefer
is definitely not—as its slogan asserts—
the one beer to have
when you’re having more than one).

Still,
my IPA-swilling pals have opined
that I don’t understand its “subtleties.”
When I start to wonder if they’re right,
if maybe I should spend $22.50 on a six-pack,
I remember the first time I said,
No fucking way to my mother’s chipped beef,
and she made me gargle with Lysol,
the precise flavor of a double-hopped ale.
She was born in the Golden Age
of Starch and Salt, but dished out a bleak,
depression-era diet of yech—
canned meats, liver mold, tomato aspic,
tongue mousse…I grasped the need
to stretch a buck, but her Fairy Bread
was beyond frugal—buttered dinner rolls
topped with multi-colored sprinkles. I felt like
I was at the world’s worst birthday party.

People claim to love IPAs,
but people don’t always tell the truth,
and the ones who do are often alone.
As a youngster, the first story
that lodged in my consciousness
was The Emperor’s New Clothes,
giving me the stones to tell my mother
cream cheese tasted like crap.
So did cottage cheese, lima beans,
corned beef, fried Spam, fish sticks,
powdered milk, anything orange…
It gave me strength to endure
the penance of sitting alone, hours
after dinner, staring at a hardening,
untouched mound of her tuna casserole.
I’d love to drink some rad-sounding beverage
but not when hip means Raging Bitch,
Mouth Raper, Gandhi-Bot…Who labels a beer
after a holy man who was against alcohol?
When did crassness become de rigueur?
Has good old-fashioned horse sense,
with its mulish principles, abandoned
the shaping of palates, been vanquished
by haphazard cravings and the vagaries
of Madison Avenue, of IPA end-caps
nurturing mass market’s thirst for the worst?

Wouldn’t you prefer an ice-cold pilsner?
I used to sneak pre-adolescent sips
at Christmastime, when aunts and uncles
were too drunk to notice. Wouldn’t you love
the malty fizz of a nice, easy lager,
and the dizzy way it makes you feel,
like you’ve just stood up
from a spinning chair? India Pale Ale
reeks of dissonance, pretense,
and yet it’s consumed by tens of millions—
in hypocrisy, I’d argue. IPAs taste
like guava mixed with peat moss,
like eucalyptus, the acid reflux
of regret, like botched hopes and dreams,
anguish without cessation.
They taste like I’m alone in the world.
—Michael Steffen

Someday
At Joe’s off the alley
between Girard and Vassar,
and there’s only one slice left,
and everyone wants it, so
when the waitress asks
“Can I get you guys anything else?”
you say, “Yeah . . . another pitcher,
and another pizza, just like this one,”
and the truth is you can’t really afford it,
but it’s such a fine idea that
no one gives a damn.

And so you all sit, young and broke,
drunk and laughing about it all,
you and two of your best friends,
and you tack on a third pitcher,
sitting there for hours,
and to hell with wherever you
were all supposed to be.

You’re talking and dreaming and living,
and one of your buddies says,
“Imagine, years from now, we’ll all be
old and married,” he says, “and we’ll be
sitting on a back porch drinking,
and watching our kids play together…”

And even though it’s impossible,
even though none of you have a girl,
and don’t even believe you ever could,
it seems true enough, seems right,
and it seems like it will somehow happen,
and you all smile and finish the last of the beer
thinking about how great
it’ll all be