“Hey, slop jaw, quit boozgarting the felony juice so we can finish frontloading and get our fade on.”

Confused? You should be. Bar slang is constantly evolving and if you fall behind you’ll start coming off like Al Gore trying to get down at Ol’ Dirty Bastard show. So let the Drunkard hip you up and get you in with the cool kids.

Bait-and-switch When an attractive person invites you to his or her table then steers you to a less attractive friend.

Bayonetting the wounded Gamely drinking the half-finished beers the morning after a party.

Bedspins The variety of spins that occur while lying prone. Putting one foot on the floor usually helps. If you are already on the floor, may God have mercy on your soul.

Beer bitch The person sitting closest to the cooler or refrigerator at a party whose sole purpose in life is to grab another beer when yours runs out.

Beer Pressure The tendency to drink what your friends drink.

Beer queer A straight man who will pretend to be gay so as to solicit free drinks from an unsuspecting homosexual. 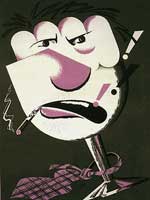 Booze compass The instinct that leads you home when you’re blackout drunk.

Booze snooze A nap taken early in the afternoon after a morning of drinking, designed to prepare you for the evening’s drinking.

Breaking the Seal Urinating for the first time during a drinking session. Once the seal is broken, restroom trips become much more frequent.

Buzzkill That which destroys the buzz. Examples are fights with one’s significant other while at the bar, boors who insist on telling that story one more time, your best friend admitting that he/she is sleeping with your significant other, horrible music after you’ve just heard three of your favorite songs in a row, or discovering that you actually have less than half of the money that you thought you had at the beginning of the evening.

De-boned To become so drunk you appear not to have any skeletal structure to hold you up.

Deja booty When a drunk inexplicably has sex with the person he swore he would never speak of or to again, never ever.

Deja booze When an infrequently enjoyed drink reminds you of the last time you enjoyed it. As in, “This margarita reminds me of when I was partying in Tijuana, just before I vomited on myself, picked a fight with the bartender and got thrown in the clink. Good times, good times.”

Deserter A full beer, possibly hidden, found when cleaning up the next day after a party.

Hell’s Own Drag Influence. As in, “See the size of that shot? Ever since I started dating the barmaid, I’ve got hell’s own drag at this bar.”

Drink shrink Those who, after a few drinks, discover they have the ability to psychoanalyze and offer solid personal advice to their friends and/or strangers.

Drinking in stereo Boozing with a drink in each hand.

Flip wire That fine, fuzzy line between buzzed and hammered. As in, “That fucker ain’t driving, he tripped the flip wire three shots ago.”

Floored When you’re so drunk standing up just seems a silly waste of time.

Frontloading Getting drunk before going to a nightclub because the club’s drinks are expensive.

FUBAR Fucked Up Beyond All Recognition.

Fugly bus The mysterious bus that whisks away all the ugly people from the bar and replaces them with their beautiful cousins while you’re in the bathroom draining your tenth pint.

Get the fade on Going out with intention of getting very, very drunk.

Grog monster The part of the brain that insists you keep drinking long after you should have went home and passed out.

Gutter hugger Drinkers who empty the contents of their stomach into a gutter or nearest trash can.

Housed Moderately drunk. This term is particularly popular with those who listen to the Grateful Dead and smoke large amounts of marijuana.

Jack and Jill A shot of Jack Daniels and a beer.

Joint of no return A bar from which you are 86’d.

Jumping on the grenade When two groups of the opposite sex meet, one member “jumps on the grenade” by talking to (or possibly sleeping with) the least attractive member of the other group so as to ensure the success of the rest of the group.

Jumping strays Stealing unattended or abandoned drinks at a bar or party. As in, “I’m so broke I’ve been jumping strays all night.”

Kamikaze eyes The look a drunk gets when he spies someone he always hated but never had the guts to fight. Until now.

Keg commander The boisterous chap who hovers around the keg so as to ensure everyone knows how to properly pour a beer.

Last call lothario Someone who’s shy until last call, at which point he’ll try to hook up with anything that has a pulse and/or booze at their home.

MDA Mysterious Drinking Accident. When you wake up with bruises and cuts you have no recollection of receiving. Also called UPI (Unidentified Party Injury), UBB (Unidentified Beer Bruise) and drunk marks.

NBR No Beers Required Someone sufficiently attractive enough to hit on while sober.

Pavement pizza Vomit on the sidewalk, often found outside bars.

Prole piss poser A yuppie who attempts to appear down with the working class by making a point of ordering only bottom shelf liquor and cheap beer.

Mystery guest The guy at the party no one seems to know. They usually lurk in the kitchen near the booze.

Riding a rocking horse into battle Getting drunk on 3.2% beer.

Shelf jumper Someone whose tastes improve from bottom to top shelf when someone offers to buy them a drink.

Skinflint sprint The fast walk a departing patron employs after he’s left the cocktail waitress a less-than-generous tip on the table.

Slop jaw Someone who spills (unintentionally or otherwise) most of his shot down the side of his face. As in, “Don’t waste anymore money on Mike, he slopjawed the last three shots.”

Stout gout The morning-after flatulence that often follows a night of drinking Guinness.

Thousand mile glare The blank, vaguely hostile look a veteran bartender will give you when you ask a stupid question such as, “Is the beer cold?”

Tip jar anxiety The fear that an unobservant bartender won’t notice you left a good tip.

Trip dog The invisible canine that starts getting underfoot around your tenth drink. Once he arrives he will trip you up the rest of the night.

Trojan hooch Bringing an empty bottle wrapped in a brown paper bag to a party so you won’t appear a mooch.

Twelve stepper A reformed drinker or someone who wants to quit drinking early. As in, “Hold on there, twelve stepper, the bouncer hasn’t even threatened us yet.”

Two pint screamer Someone who gets noticeably drunk after two drinks.