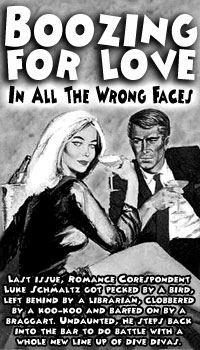 So I got a little roughed up last time.

You can’t just sit there and lick your wounds all night. What you do is pour whiskey on them, straighten your tie and hit the bricks. Somewhere out there in all the bars, dives and nightclubs I knew deep down in the private part of my soul that the perfect girl was waiting for me and, throwing past experience to the wind, I went looking for her. These are the girls I met instead. 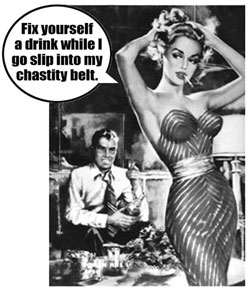 It’s not always the case, but sometimes a woman who publicly displays herself in this way is actually masking extreme insecurity. Such a woman has no intention whatsoever to act upon what her visage suggests to the perverted male mind. “Desire Me” is her name and flirting is her game. The things that come out of her mouth make you think the bartender dropped LSD into your whiskey. She goes into toe-squirming detail about her fellatio skills and her plans to bestow them upon you this very evening. She even goes so far as to flick her stud-pierced tongue into the foam of your full pint glass. Before you know it you’re hypnotized by the succession of martini glasses caressing her lips and every time one goes empty you make sure it’s quickly refilled.

Your Defense: Bang your head vigorously against the bar to break the spell before you go broke buying cosmopolitans. If you’re foolish enough to go home with this one you’d better pray she has a cold beer to soothe your soon-to-be-neglected nether regions. Once isolated and out of the public eye, this temptress will retreat into her psyche like a wolf afraid of sheep. All talk of mouths and crotches interfacing will cease and she will assume the demeanor of a braggart halfway to the end of a diving board who just remembered she can’t swim a stroke. The more you try to steer the subject back to lurid physical contact, the deeper she retreats into her inner nunnery. When she goes to the loo, raid her kitchen for booze. If the gods are on your side you’ll find a cold beer and maybe some flavored vodka. Pour the beer down your pants as you run out the door, crawl under an abandoned car and drink the rest of her hooch in peace. Pass out as a stray dog laps the drool from your chin.

The Tattletale
All women desire attention but this one craves it like a kitten that was weaned too soon and now sucks on everything in sight. She’s heard rumors that you’re an upstanding fellow not afraid to defend a lady’s honor. Guess what Sir Lancelot—she aims to test your valor. It’s true men can be pigs. Downright swine. She knows this 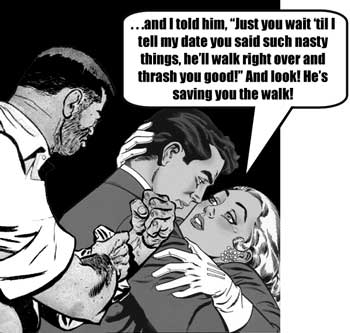 and goes prancing with her port amidst the porkers, swaying her tail at every table until some schmuck with no manners says something rude. Perhaps it was: “Hey mama, why don’t you come over here and get some daddy.” Or maybe: “Hey honey, nice tube top. It’d look a lot better if you pulled it up over your face.” Or perhaps the tried and true: “I’m the idiot your waterhead mother forgot to warn you about.” Whatever the slur, she’ll memorize the remark, reel her jaw up off the floor and fling herself at you, sobbing under the sting of the horrific insult. You can’t help but feel like you’re in a playground as she cups a hand and whispers in your ear while glancing askance and pointing a finger directly at the dude. Yes, he’s looking right back. And no, he doesn’t seem particularly scared.

Your Defense: Ignore your instinct to get up in the guy’s face. If she’s your girl, that’s one thing, but this is just a date and so far you’ve bought all the drinks. Besides, interrogating a moron about his relative sense of decency is no way to spend what precious little time there’s left before last call. Anyone who mouths off to a girl in a bar is a coward and is probably surrounded by more of the same. Rearranging their faces will only make them uglier. Take your date on the beautiful high road to the bar and order cocktails and shots. Counter the sour sounds that poisoned her earlier with the nectar of beer, tequila and sweet nothings. Compliment her on her hair, her attire (ah, tube tops) and her choice of libations. If she continues to carry on about Mr. Loudmouth you know you’re wasting your time. Since she’s so fixated, there’s a good chance she hangs out with guys like that all the time. When she leaves with him after last call, beg the bartender for two double shots of Jameson. Stumble home and drift off to dreamland listening to Blue Valentine by Tom Waits. Don’t sweat it man. Nobody likes a Tattletale.

The Broken Record
We all do it and we’ve all suffered the pain of someone else doing it. You get a little loaded and the needle skips off the track and for the rest of the evening you feel it very important to repeat the same very meaningful (to you, anyway) sentiment over and over and over again. It goes like this:

So, you’ve dressed nice, picked her up in a shiny new cab and taken her to a hip joint where the swanky swillers swagger. The affliction comes on early for those with a low tolerance and tonight it’s broken record time in record time. After two Tuaca shots with Cape Cod chasers she starts rattling on about that one time on New Year’s Eve when you smiled at her at midnight. Apropos of nothing, you change the subject to Mickey Rourke’s performance in Barfly, but the Broken Record is not so easily fooled and soon you’re back to New Year’s Eve. Apparently she was hoping for more than a smile and now she’s back in that moment twirling a lock of curly red hair, smiling like her mouth is numb with Novocaine and spilling her beverage onto your knee. “I remember on New Year’s at midnight at that party and everyone was kissing except for you and me, and you smiled over at me and I wanted to talk to you but I didn’t know you and was kinda shy. Do you remember that?”
By now you can mouth the words. You get the idea her thoughts are generated by a hamster in her head running on a tiny little squeaking treadmill.

Your Defense: Resist the temptation to sarcastically finish her sentence the next time she speaks. That will only hurt her feelings and, believe me, you’ll hear about it all night. You can’t walk away and you can’t jerk her back from the edge, she’s already jumped. Don’t fight the obvious. Relinquish yourself to the situation and quicken your drinking pace three fold. Your only hope for a good time is to get smashed ASAP and allow the spirit of the Broken Record to possess you as well. Fight fire with fire. Before you know it, you’re both stepping all over each other trying tell about that one time at that party on New Years Eve. Look at it this way—for every time you had something really important to say and you wanted to be the Broken Record and resisted out of respect for your friends, this is payback. Revel in it like a pig in mud. Loosen your tie and repeat idiotic mouthings until you’re blue in the face. By now the folks around you are probably horrified at you and your date. Fuck them. You’re both very happy in your own beautiful moronic little world where only four sentences exist. 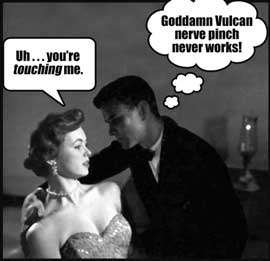 The Professional
Perfect people make me nervous and this woman is no exception. Her hair? Looks like Michelangelo sculpted it out of sunshine and Aquanet. Nails and makeup? Hundreds of man-hours went into their creation. Coordinated outfit and matching shoes? CoCo Chanel would curl up and die of envy. She sits up straight, chews with her mouth closed, rarely talks or smiles and ignores everyone. Her shell is as seamless and uncrackable as the titanium casing of a nuclear missile. You imagine liquid nitrogen running through her veins instead of blood. Normally you wouldn’t go within a mile of her, but she has the nerve to keep showing up at your favorite bar, she drinks Long Islands and double Jameson’s without showing any signs of intoxication whatsoever, she is the riddle you must crack. Tonight you feel brave and there’s a wad of cash burning a hole in your pocket. Best to douse it immediately with some gin and see if you can get this mannequin to laugh. You sit down next to her and feel a sudden chill. Better warm up with some whiskey—how about a shot of Jameson? Make it two. Don’t use any foolish one-liners to break the iceberg. Be honest and tell her why you’re there. “Hi. I see you in here all the time. You drink more than three of my friends combined and you never seem to get loaded. What’s your secret?” She grabs one of the shots you ordered and slams it. She looks forward and says nothing. “I couldn’t help but notice you like Jameson,” you say. She grabs the other shot and slams it too. “What do you know, dumb ass?” she finally quips. “I drink Tullamore Dew but this shit hole doesn’t have it, so I go for Jameson because it’s the only thing close.” She then finishes off her cocktail and, without looking at you, says: “Back to your original idiotic question. Buy me a drink and maybe I’ll give you an answer.”

Your Defense: Alright, tough guy. I hope you ate your Wheaties today cuz this one’s gonna be rough. Four rounds later you’ve given up on wit and charm and revert to silly clown maneuvers to try and get this heavyweight into the ring. You’re drunk now and she’s still as serious and statuesque as ever. Time for the painful tricks that always get laughs. You do the no-hander where you grab the pint glass with your teeth and slam it in one glorious gulp. No smile. You go, “Hey, look at this!” and bust a beer bottle across the side of your head. Not even a glance of concern. You pull out all the stops and order up the ingredients for a Stuntman. Salt, lime and well tequila. You pour the salt onto the bar and scrape it into a line. You snort the salt up your left nostril, shoot the tequila and squeeze the lime into your right eye. Still nothing. Not even the ensuing sneeze attack or the watering eyes can get her to smile. Pal, you’re up Whiskey River without a shot glass. She ain’t gonna crack. When you fall backwards off your barstool and as she steps over you on her way to the door, do your best to look up her skirt, because that’s all you’re getting. Oh, slacks? Too bad buddy. Let that be a lesson to you.