Sitting alone at the end of the bar, forlorn, dangerous, vulnerable and predatory. Her mixed signals fan out in judgment-jamming waves, perplexing and nearly irresistible to a lonely male. Masks, she’s got them, and the one you’ll get to see depends entirely on what she sees in you and your wallet.

The bar vamp. Tab skimmer. Barlot. Your grandfather knew them as B-Girls. Walk into any bar on a Friday night and she’s sure to be there, working her delicate trade, soaking up free drinks as fast as she can get saps to buy them. Cunning, crafty, broke, and, most of all, thirsty.

So what’s her secret? What strange and terrible power does she hold? There are better looking and more deserving women in the bar, certainly, but before the night is over this shade of siren will be drunk and a half a dozen guys will be wondering where their paychecks went.

First off, the bar vamp is not inherently evil. Hell, she’s probably half the reason guys go to the bar. She talks to us when other girls won’t look our way, she dishes out the compliments that make us imagine we’re perhaps better men than we suspected, she’ll hang onto every word of our stories even after we can’t understand them anymore. Just so long as we’re buying.

Their lineage is long and storied. As long as there’s been a tavern with lonely men with money to spare, they’ve been there to help them spend it. The speakeasies were full of them, Mae West and her kin where stacking up your grandfather’s bar tab before you were born, they were picking pirates clean as fast as they could unload Spanish doubloons off their boats, even the mild-mannered Ben Franklin had a few things to say about those Revolutionary War widows who managed to get cock-eyed in the colonial pubs without ever reaching for their purses. And who could blame them? Back then men pulled down a much higher wage than the ladies, perhaps they were the first proto-feminists, just trying to even things up a bit, each shot they slipped under the wire was a step toward gender equality.

By now some of you may be thinking, “Oh, I get it. You’re talking about prostitutes.” Not at all. There’s a couple major differences. First, you’re paying them in alcohol. Second, they are very likely not going to sleep with you. You’ll be lucky to get a kiss. You’re not buying them; you’re trading drinks for their attention.

Now that we have that cleared up, here’s a look at what we’re up against. Men, watch your wallets; ladies, take notes. 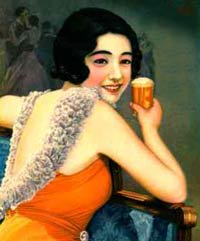 The Tab Skimmer
She’ll stick to you like glue for as long as it takes to get the bartender thinking the two of you are sharing the same tab. Then she’ll slip away to work the rest of the room, touching base with you as little as necessary to keep the floodgates cracked open. The best of this breed will have to answer this query from the bartender before the night is over: “Which of the four tabs do you want this Double Purple Monkey on, ma’am?”

A more deceitful shade of the Tab Skimmer is the Tab Jockey. Once the Jockey detects a large group has secured a tab, she’ll slip into the circle and start ordering with you to ostensibly make things easier on the cocktail waitress. She’ll promise to chip in at the end of the night and just before last call she’ll “go to the restroom to freshen up.” And you’ll be fresh out of luck when you realize she was talking about her apartment’s restroom, not the bar’s.

The Shot Magnet
This wily interloper practices the art of the short con. Anytime a group of guys gather at the bar to do a communal shot, the Shot Magnet will appear as if from nowhere, throwing her arms around the boys with their wallets out and yelling, “Hell, yes! Let’s do a shot, you beautiful bastards!” Exclude her and you’ll come off as the biggest skinflint since Jack Benny. 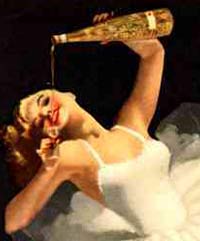 The Celebrator
She’s pitching and you’re swinging. This enthusiastic siren belts out the song of celebration in hopes it’ll attract congratulatory drinks from the unwary. You will know her by these joyous cries:
“I finally got my divorce papers!”
“I’m leaving for France tomorrow!”
“It’s my birthday!”
“I just graduated from the Stripper Academy!”

The Sacrificial Virgin
She’s teetering on her barstool like a South Seas virgin trembling on the rim of a volcano, ready to take the plunge. By all appearances she shed her inhibitions like an itchy grass skirt two kamikazes ago and just needs the politest of nudges to fall headfirst into your arms. Five cocktail nudges and a couple tequila-shot shoves later and she’s not only still standing, she’s hoofing it back to her village. Here are her ersatz mating calls:
“I am so wasted!”
“I wonder who I’m going home with tonight?”
“I’m almost as drunk as that time I went home with that average-looking stranger with whom I made love for twelve hours then got up early, made him breakfast and washed his car. Yes, I am almost that drunk.” 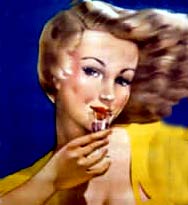 The Hit and Runner
She’s looked you up and down and reckons you are good for exactly one drink. “Let’s do a shot!” she’ll shout, and will start thanking you before it hits the deck. She’ll toast, sink it, and say “That was awesome, thanks!” Her hands will move nowhere near anything resembling a pocket or purse and your male pride will force you to mumble “No problem” as she careens away to the next victim. Don’t feel bad. You got off easy, chump. 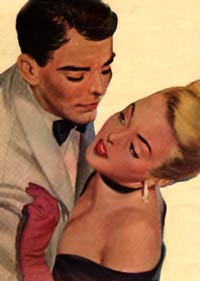 The Ego Stroker
She’ll look for the guy who’s short on looks but long on money. If that happens to be you, she will stroke your ego, she will build you into someone you always wanted to be, and that someone is the kind of big shot that wouldn’t even think about letting a lady buy her own drinks. She’ll especially polish your self-image in matters pertaining to your theoretical financial success and career, as those are the wellsprings from which free drinks flow. Here’s a sample conversation:
ES: “Hey there, handsome. That’s a nice jacket.”
YOU: “Well, it did set me back a little.”
ES: “I’ll bet. Did you name your company after yourself or are you the modest type?”
YOU: “Well, it’s not my company yet. But I am one of their top fixture salesmen. Last month, I set the company record for—”
ES: “Don’t be modest. I’ll bet you’re their best fixture salesman. I know a winner when I see one, and baby, you’re a winner with a capital W. Which is also the first letter of my favorite drink. Guess what it is.”
YOU: “Uh, whiskey?”
ES: “Smart and handsome! You heard him, bartender. And make it a double.” 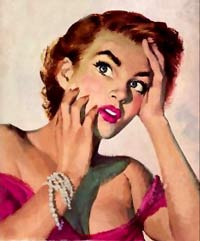 The Doe-Eyed Novice
This cleverly disguised vamp’s prime victim is those of us who favor exotic-looking drinks and rare scotches. This seemingly uninitiated lass will wander up, gawk wide-eyed at your drink, and coo with wonder:

DN: “What is that?”
YOU: “Why, it’s a Harbor Master Swizzle.”
DN: “It looks so interesting! Everyone else is drinking boring beer and here you are, drinking a Harbor Caster Fizzle.”
YOU: “Master Swizzle. Would you like a taste?”
DN: “Could I? Oh, thank you, sir! Tell the bartender I want it half-and-half on the rum and vodka and hold the powdered sugar, I’m watching my weight.”

The Purse Fumbler
She’ll slide in next to you as your drink is winding down its brilliant and oh-too-brief appearance. After striking up a friendly conversation, she’ll get you to order the round (it’s just so much more convenient that way) and when the bartender sets them down she will dig and dig in that black hole of a purse, she will pull out enough make-up, pens and bar napkins to fill the trunk of your car. No matter how hard she looks she cannot find that elusive money or credit card. You will eventually fold and pay up. Oh yes you will. 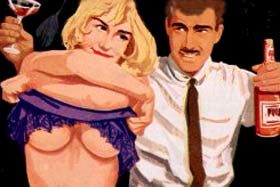 The Flasher
She understands the reward system. Buy her a drink and she’ll flash her breasts. And you’re probably figuring, hell, if she’ll flash a roomful of strangers, she’ll surely give me a one-on-one strip tease later. Good luck, chum!

The Wounded Doe
A girl in trouble is a temporary thing, as the song says. Pain equates vulnerability and you will be drawn to her like a lion to a limping gazelle. Maybe her heart has been roughed up a little, maybe she’s had a tough day and needs some sympathy to soothe the hurt, maybe she’s sprained her ankle and only whiskey seems to take the pain away. Her prime weapon is her eyes: so hurt, so lonely, so helpless. What kind of monster wouldn’t spring to her aid? What kind of unfeeling creep would allow her to pay for her drinks? 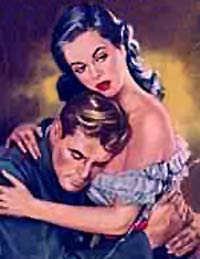 The Bar-Crossed Lover
From the moment you walked in the door she fell in love with you. Her voice is husky with passion—could you be the one she’s been looking for all her life? She’ll guide your hand with hers as you light your smoke, she’ll stare deep into the mesmerizing pools of your eyes, she will get so mesmerized she’ll forget all about mundanities like bar tabs and paying for drinks. You’ll feel like you’re on a romantic first date and there’s no way you’re going to blow this one by exposing yourself as a cheapskate. Then, as last call comes around, she will execute the Last Call Ditch. If you track her down to the other end of the bar, she’ll announce she’s actually married. To a woman. Who’s standing right next to her. Glaring at you.