In 1992 Parfrey published Cad: A Handbook For Heels (“The Forgotten Lore of the Red-Blooded American Male”), a celebration of men’s magazines of the late ‘50s. At a time when hipsters hadn’t yet cottoned onto bachelor pad music and exotic cocktails, Cad brimmed with essays and illustrations on everything from burlesque, exotica music, tiki culture, Russ Meyer, adventure tales (both true and fictional), as well as booze-related essays on the nuances of a “perfect” martini, the history of rum, and the definition of good scotch.

As to whether the book inspired or presaged the decade’s infatuation with all things retro is moot — it was a balls-out throwback to a bygone era, standing in diametric opposition to the constricting buzz-kill mores when Political Correctness was at its height.

Since then Parfrey has continued publishing comprehensive studies of postwar men’s culture, including It’s A Man’s World: Men’s Adventure Magazines and Sin-A-Rama: Sleaze Sex Paperbacks Of The Sixties.

Keen to tap into Parfrey’s unique insights, Brian Clark interviewed the L.A.-based Parfrey regarding his thoughts on hooch and the glory days of drinking culture.

Modern Drunkard Magazine: There’s a widely-held perception that people in postwar America were square, straight-laced and full of hang-ups, yet it seems to me that if anything Americans have more hang-ups about drinking now than they did back when Dean Martin and his ilk were the arbiters of style and etiquette.

Adam Parfrey: It seems like there’s not enough free time, not enough time to get fucked-up these days. We’re stuck in a situation where we have to complete projects, make money, work double shifts to make a go of things. It’s easier societally to drink in countries like Japan and Russia, certainly. Also, all those victim group restrictions engineered by people like MADD are making a victim of me! Let me drink! But remember, every prohibition has its repeal. Modern Drunkard Magazine is the vanguard of this movement and I salute it!

MDM: In the books you’ve published on men’s culture a common thread is the hedonistic intermingling of adventure and sex with booze. In the postwar era, a “man’s man” fought hard, drank hard, and reveled in the pleasures of the flesh. Today, the idea of mixing sex with booze (or booze with adventure) is more than a little taboo. 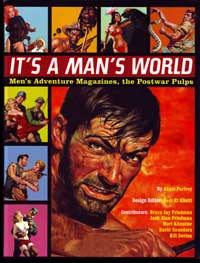 AP: Cad was the most proscribed book I ever published. It was banned in Canada, having been seized from some alternative store in Vancouver. Some bookstore owners screamed at my distributor sales reps, “We nailed this door shut long ago. Get this book the fuck out of here.” It was as if the bookstore owners considered it a history of the Holocaust, but from the Nazi point of view. Very strange.

MDM: In one of your articles in Cad, you touched on the idea that psychedelic drugs of the sixties were often viewed by men such as Gershon Legman as a threat to a preexistent “booze-centric attitude to eroticism” — i.e. the idea that alcohol was, “the magic potion that unshackled social inhibitions,” while drugs just clouded people’s minds. Would you agree with the sentiment that, whereas psychedelics help people get outside themselves, alcohol forces people to get inside themselves?

AP: There’s a good reason for psychedelics, to get short-term benefits of schizophrenia without having to live with it after you come down. There are obvious insights that can be gleaned here. They will certainly cloud your mind if you continue taking these psychedelics. But alcohol is getting a thumbs up from medical America now; that a couple few drinks a night, and the reduction of stress is better for you than killing yourself with anxiety. These discoveries are going to be a social and societal boon for drinking in the near future at least.

MDM: Back then, a gentleman drunkard knew how to handle his liquor with decorum and class, while in contrast a “rummy” got surly and violent. Nowadays anyone who drinks regularly and to excess is perceived as an “alcoholic” How would you view Americans’ attitudes towards booze as having changed in the last several decades and what do you suppose has led to such a change?

AP: I’m old enough to remember a time (the early- to mid-60s) when my folks had parties and went to parties where everyone drank, and drank a lot. Sometimes there were fights and screaming matches, but life went on and people dealt with it as a normal occurrence. I remember when this old souse, Jason Robards Jr., was at my parents’ place drinking all night, doing a couple runs to liquor stores. When I woke in the morning to go to school the fucker was still drinking and ordered me (the hosts’ kid) back to bed. Even though the sun was out, he told me that it was not time for school, and to get back to my room. I snuck out the back door. School was a bit more inviting to me that morning with a fucked-up actor on a bender back at home.

Another time, when I was older, I was baby-sitting the kids next door — the actor Aldo Ray’s kids, Paul and Eric. Aldo Ray was a big bastard who played Green Berets in John Wayne movies. His best friend at the time was Ed Wood. So one night, Aldo Ray gets back home, and he brings with him a couple sauced old geezers. I didn’t know who they were, but they smelled like puke and cheap liquor and they scared the shit out of little me. But they insisted I stay and listen to them argue with each other about whether they thought it was okay to let me go home.

My feeling about liquor and drugs is this: the problem isn’t the drugs or the liquor, it’s the people themselves. Many people don’t know how to handle the stuff, but how would anyone get to high or inspired moments without them? Imagine popular music without liquor or drugs. Impossible to imagine.

MDM: What’s your favorite drink and why?

AP: A friend just turned me on to this Haitian rum, Barbancourt. It’s really tasty and good. It’s supposedly used for voodoo ceremonies. I wouldn’t expect anything good to come out of Haiti, but Barbancourt Rum proved me wrong.

MDM: Do you have any favorite bars? If so, what’s so special about them?

AP: I remember a couple dives in Hoboken in the mid-80s that sold 30 cent beers all day and night and 50 cent shots. You couldn’t see the faces of a lot of their customers; they were face-down on the bar.

MDM: Would you be kind enough to share a particularly entertaining drinking story with us?

AP:Well, I was once with Boyd Rice and a couple girls at this place called Henry Ford’s in Portland, Oregon, and we were guzzling a up storm. I forget the joke I told, but Boyd was laughing so long and so hard that we all joined in and kept at it for like five or ten minutes. Then I noticed the bar pianist clutching at his chest and spilling forward onto his face, suffering a massive heart attack. I was trying to call Boyd’s attention to this, but all my faces and finger-pointing made him laugh even louder and harder. I think that must have been the last thing this pianist heard as he was dying. Our drunk voices laughing and screaming as loud as can be.

For more info on Adam Parfrey (or to order any of the above-discussed books) visit www.FeralHouse.com.