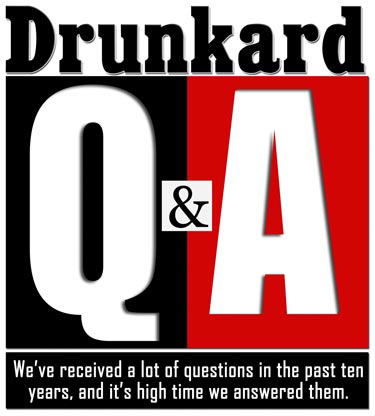 What’s with the layout? It seems a little dated.
A little dated? Try a lot dated. You can date it all the way back to 1950. Call us nostalgists, tell us we’re drinking in the past, but we prefer to take our style cues from the men’s adventure magazines of the middle of the last century, as opposed to the slick contemporary examples of Maxim or Stuff.

Why don’t you do band reviews? Because I’m in a band, and we really—
Shhhh. Hush up now. We don’t do bands reviews because 1) we’re not a music magazine, 2) we are friendly with a lot of bands and don’t reckon we’re capable of giving an objective opinion, and 3) every other goddamn small magazine does them, and they’re rarely honest—they make every local band sound like they’re the greatest thing since The Clash. In our opinion, no reviews are better than dishonest ones.

Why don’t you review Denver bars then?
Because most of our advertisers are Denver bars, and we would naturally be inclined to give them glowing reviews, regardless of what we might actually think. And that would make us hacks. Pick up your average Denver magazine and you’ll find a bar review right across the page from the bar’s ad, and guess what? It turns out the joint is the greatest fucking bar on the planet! That said, the bars that advertise in MDM possess at least one quality the others don’t: balls.

What’s with the erratic publishing schedule? Are you monthly, bi-monthly, tri-monthly, or do you just come out whenever the hell you feel like it?
We’re, uh, periodical. Oh, you can rest assured  great drunken proclamations are made on a weekly basis that we will get back on schedule, and soon, but things always tend to become unglued about six shots later. What I’m saying is we’re not a gang of soulless mercenaries trying to grab a market niche—we’re a gang of drunks trying to build a rocket to the moon to investigate rumors that the craters are full of hooch (to paraphrase Dr. Thompson).

What’s with the typos? Don’t you have any proof readers?
We have 100-proof readers, as it were, and a sizable cadre of them. Here’s the thing—the proofers are all enthusiastic drinkers and when they get together to proof, they naturally start drinking. And for all the benefits of alcohol, it does not lend a keen eye for detail.  Reading the Drunkard is like talking with your drunk buddy at the bar—his diction and pronunciation may not be pristine, but he’s likely to have something interesting to say. Most of the time, anyway. If the day comes when an issue rolls off the presses without a single error, you can rest assured we have sold out to a conglomerate, and are presently drinking expensive rum out of coconuts on a beach in Guatemala.

How can you drink so much and still put out a magazine?
First off, we have to drink that much just to know what the hell we’re writing about. Second, where the devil did people get the idea that drinking somehow gets in the way of production? The most prolific writers, artists and journalists of history drank before, during, and after work. Personally, I’m amazed that magazines are produced by sober people.

What do you drink around the office?
Bourbon generally, with a healthy mix of absinthe, martinis, Hemingways (gin and tonic with a healthy splash of bitters) and Brutal Hammers (red wine and vodka).

Aren’t you going to eventually run out of things to write about?
Not in a thousand years. It’s an incredibly deep well that’s continually refilling.  If we’re able to capture one percent of the available material during our run, we’ll be extremely surprised.

I submitted my damn story, then sent you a dozen increasingly bitter follow-up emails, and you still haven’t gotten back to me. What gives?
When the magazine first started we tried very hard to personally reply to each submission, no matter how wretched and unpromising. We figured writers would value feedback and constructive criticism. We quickly discovered that for the most part they don’t. Writers these days are more likely to say, “Well, fuck you then! My mom says my story ‘Frolicking with the Battery-Operated Sea Horses’ is ten times better than any story you’ve ever published. I hate you! I hate you!” While we still occasionally encourage writers with obvious potential, we find it much more dignified to remain stonily silent.

Isn’t your very existence a sure sign of the coming apocalypse?
It’s been said. But we doubt it. Before the current tide of political correctness, drinking magazines were fairly common and the world didn’t end then, now did it?

What’s your problem with MADD? Don’t you realize they’re just a sweet and innocent grass-roots organization trying to get drunk drivers off the streets?
The hell you say. They may have started out that way, but presently they’re a greedy corporation bent on taking away our booze. The president of the Mothers, for crissakes, is a man, and so are most of the board of directors. And all very well paid. Even the founder of MADD, Candy Lightner, has condemned them as prohibitionists who are up to no good.

I heard there is some sort of Drunkard secret society with secret handshakes and weird rituals. Is this true?
Not as far as you know.

Don’t you feel terrible about what you’re doing?
Nope. In fact, we feel pretty nifty about the whole thing.

Where are you getting that absinthe from? I thought it was illegal in the U.S.
Why, are you a cop?  Actually, it’s only illegal to sell it in the U.S. It is legal to possess it. There are a number of foreign web sites that will ship it to your door (we recommend www.originalabsinthe.com). If  U.S. Customs does intercept your shipment, they will seize it, but you will not suffer any legal consequences.

What does the future hold for MDM?
Oh, many splendid and wonderful things. Just you wait and see.