I rendezvoused with Satan at the Bon Chance Bar in New Orleans.

I must confess I doubted his credentials from the moment he called us, and nothing in his appearance changed my mind. He sat by himself in the corner with a cocktail, rather dashingly attired in a white linen summer suit. Pentagram tie pin aside, he brought to mind a successful late-thirties art gallery owner. To hedge my bets, however, I brought a glass of St. Callan’s Scotch with me from the bar.

Modern Drunkard Magazine: How the devil are you? Or should I say, how the you are you?

666: Getting stronger every day.

MDM: So the Bible thumpers like to say. Now, you claim to be the Devil himself. No mere demon, you are Lucifer, Beelzebub, Ol’ Nick, the Prince of—

666: I am the earthly manifestation of Satan.

MDM: Right you are. What’s that you’re drinking there?

MDM: Truly? That’s illegal, you know. But human laws wouldn’t concern you, would they? Do you think it should be legalized in the States?

666: Of course. Absinthe serves me well.

MDM: Me as well. We’ve spoken before, you know. Through a channeler in London. You possessed her and—

MDM: Are you certain? You drank all my rum.

MDM: Perhaps it was one of your minions. Perhaps old Demon Rum, himself, eh? May I call you Nick?

MDM: Why, yes. Have you ever tried a Beelzebub Cocktail before? It’s Cointreau, vodka and chili sauce. I enjoyed—or should I say tolerated—several in Norway. They serve it with a special chant and little mirror with a pentagram painted on it. So you may watch your horns grow after drinking a couple. Where are your horns?

MDM: Can’t say I blame you. Would you like a Beelzebub? I mean, if someone names a drink after you, the least you can do is try it.

666: I don’t care for Norwegians or their drinks. They irritate me.

MDM: In 1662 they burned 19 women at the stake in Norway after they confessed they’d spent the night dancing and drinking with you on a mountain called Domen. You know, the big Domen wingding.

666: I can’t be expected to remember every little shindig. I’m a pretty busy guy.

MDM: I should say. Do you ever tire of the game?

666: Well, it’s not as challenging as it used to be. Now everyone just wants to leap on board the wagon. Times were, I had to promise riches and fame, now they’re happy with a case of beer and some concert tickets. It’s different now.

MDM: Oh, I don’t know. You got Adam and Eve to go over for an apple.

666: Yeah, but it gave them worldly knowledge. Taught them about good and evil.

MDM: Are you certain it wasn’t apple brandy?

MDM: You, on the other hand, invented light beer, didn’t you? Confess.

MDM:Ah, you know his name! How odd. You undoubtedly influenced him.

666: Listen. I’m not responsible for all evil. Or every lousy drink.

MDM:: The Koran says you’re in every grape, every drop of hooch.

666: I don’t know about every grape, but I’m pretty diversified. I spread myself around.

MDM: What’s odd is the Koran prohibits muslims from drinking here on earth, but it promises them rivers of wine if they make it to the martyrs’ paradise.

666: Maybe that’s why they’re so willing to sacrifice themselves.

MDM: I should say. Are there pubs in Hell?

MDM: So the afterlife party is in Heaven?

MDM: But what if the Muslims are right, and there are rivers of the stuff, you’d think there would be civilized places to have a seat and drink some river vintage from a glass. It’d get a bit old squatting on the river banks and lapping it out of your hand like a savage.

MDM: I shall, I can assure you. Perhaps you should look into setting up some decent pubs in Hell. Publicize it a bit and you’ll work up a hell of a clientele. Especially if Jehovah’s not serving. Good show with the saloon thing up here, by the way. Frightfully good work.

MDM: You must have heard that old teetotaler saw: “Where God builds a church, the devil builds a saloon next door.” I mean, you’re utterly thrashing him in that regard. Do you own any saloons?

MDM: But your minions are surely in the bars. I’ve met a few barmen who are surely your strongest—

MDM: You cribbed that off Jesus. Don’t tell me you’re buying into all that New Age nonsense. I always liked the hard drinking, sporting Devil image. Rushing about, committing all sorts of sins and debauchery, livening up parties, stirring up outrages of all sorts, all the while guzzling lustily from a bottle of decent rum.

MDM: So is Hell what the Christers crack it up to be? Lakes of fire, eternal suffering, that sort of thing?

MDM: Yes, but you need to work on your PR. It’s as if you’ve opened a club, then went around telling everyone you water down the scotch and occasionally light a chap on fire, for no good reason at all. It’s amazing you have any customers at all. 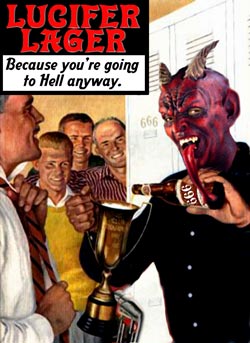 666: We don’t have to advertise. We get plenty of people.

MDM: Yes, but they’re the chaps that can’t get into anywhere else. I can’t imagine them being a very savory clientele. But I guess that’s the point, eh?

MDM: I should say. Did you invent alcohol?

MDM: Did you invent it before or after God 86’d you from Heaven?

MDM: So you weren’t tossed out for taking liberties with the Old Man’s good hooch?

666: It was much more complicated than that.

MDM: Well, there goes that theory. If alcohol is so evil, why did the Reverend Sun Myung Moon launch a campaign encouraging his followers to execute “Blessings” by guzzling holy wine? Drinking the stuff, he claimed, prevents you, the Devil, from interfering with their descendants for seven generations.

MDM: Conversely, he also claims you’re always trying to tempt God with whiskey and cigars. And God just snubs you.

MDM:He’s on the inside at the moment. Tax fraud, I believe.

MDM: Did you know Aliester Crowley, the diabolisist, used to drink absinthe around here? Up at the Old Absinthe House on Canal Street. Was he one of yours?

666: He was a freelancer. Trying to slice himself up a piece of the pie.

666: I don’t know, maybe. It’s not like I have time to get to know everyone down there. I mean, It’s not like I’m standing at the gate, passing out martinis to every jerk that staggers in.

MDM: Perhaps you should. Do you have any more of that absinthe?

MDM: If you did have some you probably wouldn’t share, because you teach that “every man for himself” thing.

MDM:But don’t you want to tempt me with your evil liquor?

MDM: Can you turn water into wine? Jesus could, you know.

MDM: Are you sure? I would have imagined it to to be an excellent vintage.

666: It was only five minutes old before they served it!

MDM: You have a point. He probably should have went for vodka. If you were truly wicked you’d go around turning wine into water.

MDM: Oh, you’d be surprised. Did you know that Judge Rutherford, the former President of Jehovah’s Witnesses, said you and your henchmen were responsible for Prohibition?

666: That’s nonsense. I get blamed for the craziest shit.

MDM: The poet Robert Burns said you can mix drinks that would tempt angels.

666: I make a hell of martini. You’d trade your soul for one of my Bloody Marys.

MDM: Would I? That good? There’s a lot of Japanese folklore about strong drink, notably sake, coming to the aid of goodness. The Oe-yama legend, for instance. The way they tell it, you were traipsing around 12th Century Japan, making a nuisance of yourself, so the Emperor sent over a couple of heroic winos to challenge you to a drinking contest. They promptly drank you under the table then gave you a good thrashing. After which you hightailed it out of Japan with your forked tail between your cloven hooves, as they say.

666: That’s bullshit. I could outdrink the whole nation of Japan.

MDM: I’m just telling you what I heard. They have festivals and plays to celebrate the event. That must surely stick in your craw.

MDM: Now this is more like it. This is the devil I expected to meet. It brings to mind a quote by Anthony Trollope.

MDM: He was a leading 19th Century English novelist. He said the sober Devil can hide his cloven hoof; but when the Devil drinks he loses his cunning and grows honest.

MDM: That was before you went on that big bender in the lower reaches. And if you think I bought that claptrap about you being in every drop of hooch, you’re sorely mistaken.

MDM:Because by my fourth drink I feel closer to God. By the tenth I’m practically sitting in his lap.

666: Are you sure it’s God’s lap you’re sitting in? Do you think that uptight bastard would let you sit in his lap? Me, on the other hand—

MDM: Fine, then. I’m going to read you a list of things you’re continually blamed for. Tell me which ones are yours.

666: I’m starting to think I should have brought my lawyer.

MDM: Don’t they all work for you? Let’s start with that. Lawyers.

MDM: All right. Making AAers fall off the wagon.

666: Not a chance. Have you been to an AA meeting? You think I want those sad sacks hanging around my crib?

MDM: Bus loads of children plunging over cliffs in flames?

666: Why would I do that? Have you met the kids these days? Half of them are on my team. 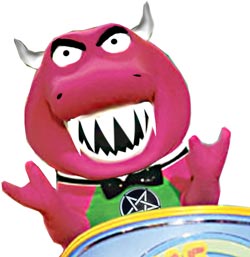 MDM: It’s a perfectly ribald cocktail my editor likes to push on chaps after they’ve had a few. Cheap red wine and vodka.

MDM: Not surprising. In certain parts of the world mescal is called the Devil’s Urine. Are you involved in the distillation process?

MDM: I see. Give me some absinthe, there’s a good chap.

666: Who do you think signs your checks?

MDM: You jest, sir. All right then, let’s get it over with.

MDM:Your pitch for my soul. Won’t have much luck, I’m afraid, but you may as well have a go.

666: You’ve had four scotches while we’ve sat here. You’re wearing a monocle, for crissakes. If a stranger walked in, he’d think you were Satan. I’ve got to go. See you down the line.

MDM: Doubtful. But if you do, have a martini waiting for me.