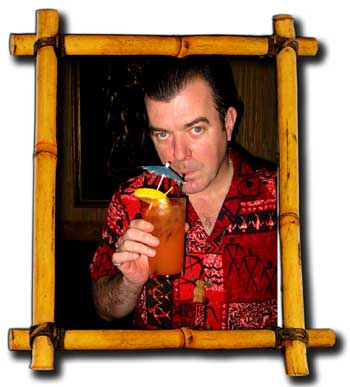 First taste: 1961. I was in kindergarten. My family and I went to the James Country Kitchen. They were celebrating the anniversary of the place and they gave all patrons beer instead of water in their water glass. Back then it was considered cute to give a toddler a glass of beer. Even the cops there thought it was cute.

The usual: I don’t have a usual. I drink the one that’s going to make feel me happy right there and then.

Why we must drink: A mentor of mine once said we all need a soporific. Half the people I know are on Prozac or Xanax. My drug of choice is alcohol. There are a million and one things a person can encounter each day that could very well drive him crazy. I have a few drinks and that sort of stuff doesn’t bother me.

Drunkest ever: Barcelona. We were drinking whiskey at the bullfights, and then we started in on the sangria for the rest of the day. That night we went to an absinthe bar. On the way back to the hotel, we saw an intriguing sign for a strip club down the street. I ended up dancing naked on stage with the strippers. However, I don’t blame the booze for my behavior. That’s the sort of thing I’d do anyway.

Top cities to get soused in:

Zagreb, Croatia. I have a friend there who knows a number of government officials who are involved in organized crime. Whenever I go out eating with them the bottles of wine just keep on coming.

Mark a good bartender: Amiable. Not too verbose. Knows how to pour a good strong drink.

And a bad bartender: One who talks about their problems. It’s supposed to be the other way around.

Essential elements of a Tiki Bar: Lots of bamboo, lots of colored lights, very dark atmosphere and lots of Tikis. Black velvet paintings of bare-breasted South Sea Island girls are always a nice touch as well. No matter what direction you look you’ll see at least two or three Tikis. The right soundtrack by the right people such as Martin Denny, Les Baxter, Arthur Lyman and Yma Sumac. If you go into a Tiki bar and there’s the wrong kind of music playing it destroys the illusion.

Favorite Bar: Hands down it’s a little place in Tijuana called Rio Rita’s. It’s in a basement beneath a very bizarre curios shop. Walking into it is like entering a bar in the Twilight Zone. The floors are paved with stones painted red. The cement holding the stones together is painted green. There are stuffed alligators on the wall, a murky fish tank with no visible sign of life inside and the whole place is lit with red and blue party bulbs. The men’s room is painted baby blue and the women’s room pink. Both have starfish shells and random rocks glued to the walls and painted over. Tourists don’t go to this place. Locals only, except when I’m in town.

Can you trust someone who doesn’t drink? No. Anybody who does not drink or has never been arrested I can’t totally trust. ¸