When you  get right down to it, we drunkards are a pretty easy-going bunch.

Our needs are not excessive. Give us a glass of whiskey and a comfy place to drink it and we’re happy. Good drinks, good friends, good times—these are keys to a good life. Every once in a while, though, teetotalers and bureaucrats get it into their heads that we are easy to push around, or even worse, that we are so inebriated so much of the time that we won’t notice when they step on our toes. They hardly ever recall their anti-alcohol actions with fondness.

Case in point: The Whiskey Rebellion.

In 1791, Alexander Hamilton, Treasury Secretary for the newly-minted United States of America, woke up one morning with what he thought was a very good idea. The country was in a small financial bind. Nothing major, but it could certainly become so if the budget was suddenly faced with a major expense, such as another war with the increasingly angry Natives or another lengthy set-to with the still-smarting Brits. A prudent man, Hamilton was loath to go any further into debt to the French. He wanted a robust source of local income—American money put to use defending American interests. Which seems a perfectly swell idea, until you discover that Hamilton thought to collect his loot by imposing a huge tax on whiskey. Not on all intoxicating beverages, mind you, just whiskey, the nation’s favorite drink, bar none.

For Hamilton, taxing whiskey served multiple good purposes. First, it would cement the needed defense monies, and second, it would force his countrymen to drink something other than whiskey, which he considered a blight on the nation’s health and morals. Drinking wine and beer was fine by Hamilton. He enjoyed both himself. Whiskey, on the other hand, made people crazy and caused them to behave too much like Irishmen. A heavy tax would deter such unseemly excesses. 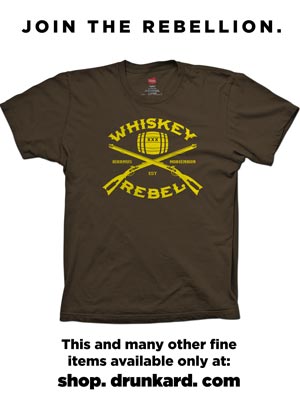 Much to Hamilton’s chagrin, many people reacted badly to the idea. Thomas Jefferson, who already thought Hamilton was an ass, called the tax “infernal.” Other people rightly pointed out that the country had only recently finished a bloody war to extricate itself from the claws of a government that had oppressively taxed its people without their consent. Pennsylvania assemblyman Albert Gallatin lambasted the proposal, saying it would put an undue burden on farmers in his state, where, incidentally, an estimated 25 percent of all American stills were located.

Despite these voices of reason and outrage, the tax bill wafted through Congress as easily as a leaf on a warm summer breeze. At the beginning, the levy was set at seven-and-a-half cents per gallon, but was quickly increased, first to nine cents, then to 11 cents. Then, to make matters worse, an additional yearly charge was leveled at farmers; sixty cents for each gallon to the full capacity of his still. It didn’t matter if the farmer distilled only five gallons of whiskey from a ten-gallon-capacity still. He was taxed for all ten gallons.

With assistance from assemblyman Gallatin, an association of Pennsylvanian farmers wrote to Congress, protesting the ridiculous law:

[The law] appears unequal in its operation and immoral in its effects. Unequal in its operation, as a duty laid on the common drink of a nation, instead of taxing the citizens in proportion to their property, falls as heavy on the poorest class as on the rich; immoral in its effects, because the amount of duty resting on the oath of the payer, offers, at the expense of the honest part of the community, a premium to perjury fraud.

One aspect of the law that particularly annoyed the protestors was that it allowed tax collectors to “snoop in barns, closets and cellars looking for hidden untaxed spirits.” The potential was high for abuse by authorities in their zeal to enforce the law.  Plus, to allow such intrusions upon a free person’s private land would be the same as inviting the hated British back to run things.

Congress listened patiently to the complaints from Pennsylvania, smiled benignly, and totally ignored them. The whiskey tax became law.
Enforcing it became a whole other kettle of ale.

Federal tax collectors descended upon Pennsylvania like a cloud of bugs. Right from the outset, though, local farmers let it be known in no uncertain terms that the tax men were not welcome, and if they chose to show up anyway they could count on repercussions. The farmers meant it, too. Tax men were routinely harassed. Angry whiskeymen attacked them with pitchforks or lured them down lonely roads, where they were waylaid and beaten bloody. If the revenue collectors remained tenacious, midnight raiders would learn where they lived and burn down their houses. But by far the most popular way of dealing with unwelcome tax officials was to capture them and spend a few free-wheeling hours having them tarred and feathered. Oppressed farmers kept a ready supply of both ingredients, and many revenuers stumbled home looking more like poultry than men, and in a great deal of pain—ridding one’s self of a coating of tar and feathers was both excruciating and time-consuming. When finally cleansed of their new plumage, victims looked as if they had been vigorously boiled. These and numerous other tactics were used against the odious tax collectors.

Back in Virginia, Alexander Hamilton was livid. He issued decrees in which he demanded that the farmers obey the law, cease terrorizing government inspectors, and pony up the money they owed without further complaint. The farmers listened and then, not to put too fine a point on it, told Hamilton and his congressional cronies to go pound sand. To illustrate their resolve, Pennsylvania whiskey makers formed themselves into an army, some six thousand strong. They sent word to Hamilton that they would sooner secede from the Union than pay the hated tax.

President George Washington now found himself in a truly rotten position. He wanted to uphold the law, no matter how stupid he might have found it, but he was horrified at the prospect of dispatching American soldiers to battle American citizens. Eventually, in 1794, his envoys arrived at a compromise with the Pennsylvania distillers. The tax would be reduced to a tolerable level and, in return, Washington’s army would depart. Additionally, anyone who had been arrested for violating the law would receive a presidential pardon and be allowed to return home.

Most distillers began paying the tax, but remained angry. Some refused outright. The tax was unfair and oppressive, facts that remained unchanged regardless of George Washington’s involvement. Those who refused to pay, as well as their children and grandchildren, invented methods of dodging the tax that would remain useful right up until today. They were America’s original moonshiners. Today, in dry counties all over the south and west, right-thinking whiskeymen continue to dodge the revenue man.

Our country almost had a civil war over whiskey. It’s a worst-case scenario, but indicative of what you can expect when you awaken the drunken giant.¸
—Richard English