The War on Booze is nothing new.

We’re all familiar with the reign of terror called Prohibition. Going further back, temperance leagues have scolded and hounded the American drinker since the first still was erected in the New World. We could, of course, trace it back even further; one can imagine that the first time some hirsute, broken-toothed caveman slurped up the rank remains of rotting, fermented fruit in a commendable effort to forget the workaday worries of Paleolithic life, some other caveman stood nearby, curling his lip with disapproval.

Recently, however, the Texas Alcoholic Beverage Commission added a new twist to the old crusade. Beginning in August of last year, under the cheekily named auspices of Operation Last Call, undercover TABC agents infiltrated bars primarily in North Texas to scout out drunken patrons. When a particular tippler looked as if he was having too much fun, they alerted uniformed authorities, who then demanded sobriety tests and, if they determined the poor fellow was drunk, issued citations for public intoxication. They even went so far as to bust tourists in hotel bars, despite the fact they were registered at the hotel and their vehicles were parked several states away. Their justification? With a straight face they claimed those drunk tourists might just jump off their hotel room balconies.

How has it come to this? Have we really so devolved as a society that the puritanical element can actually walk right into our sanctum sanctorum, our beloved bars and public houses, and arrest anyone who acts drunk? In Texas, according to the authorities, the answer is an indefatigable “yes.” Section 49.02 of the Texas Penal Code states, “A person commits an offense if the person appears in a public place while intoxicated to the degree that the person may endanger the person or another.” A Class C misdemeanor, public intoxication could cost a reveler up to $500, in addition to the heavy bar tab it took to get there in the first place. But the shame and degradation doesn’t end there. Selling an alcoholic beverage to an intoxicated person violates section 101.63 of Texas’ Alcoholic Beverage Code. Your friendly neighborhood barman could face up to $500 in fines and up to a year in jail. Sadly, most states boast similar laws. In most cases, however, such laws merely provide police with the tools needed to haul off mean drunks before they decide  you remind them of their ex-girlfriend’s new significant other and bust you in the nose. 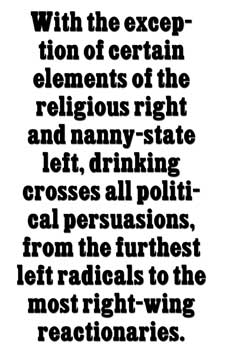 But the TABC decided to actively enforce these laws. From August through April of this year, according to an investigation by the Houston Chronicle, the TABC arrested 1,740 people in Operation Last Call. Which raises the question: why no arrests since April? That’s because, in April of 2006, we won. After a massive Operation Last Call sting in Irving, TX (home of MADD’s national HQ) netted 30 arrests in a sweep of 36 bars, the public gathered up its torches and pitchforks. Despite the obvious economic downturn that stemmed from such idiotic arrests, bar owners had at first been reticent to complain; along with making trumped up arrests, another of the TABC’s duties is granting liquor licenses. One can imagine, then, the fear of tavern proprietors in speaking out. What’s an arrest or two when the alternative is the loss of your business? At the time of March’s mass arrests, The Washington Times produced a startlingly pro-drinker piece in which one bar owner explained that he and other hostelers feared speaking out against the program. “Do you think I want a half-dozen of these baboons camped on my doorstep?” the Times quoted the fellow as saying. Betrayed by the self-interest of hard-working bar owners, the drinking public took matters into their own hands. Politicians across Texas got an earful from their constituents.

With the exception of certain elements of the religious right and nanny-state left, drinking crosses all political persuasions, from the furthest left radicals to the most right-wing reactionaries. The majority of this country drinks, according to the World Health Organization’s 2004 report on alcohol. The United States downed a respectable 8.51 liters of pure alcohol per person in 2004, or roughly two and a quarter gallons. That may not put us within puking distance of number-one nation Uganda, with an astounding 19.47 liters per capita, but it’s enough that drinkers provide numbers that politicians ignore at the peril of their own livelihoods. Already faced with ugly prospects in the 2006 election, the largely Republican Texan politicians acquiesced to the demands of complainants. Less than a month after the Irving raids, the TABC announced the “temporary suspension” of Operation Last Call.

“We understand that everything has room for improvement, this included,” TABC spokeswoman Carolyn Beck said at a press conference. Beck added that most of those arrested had been “dangerously drunk” and “might have tried to drive.” Of course, if we could be arrested for what we “might” do, nearly the entire country would be in jail by now, and the citizens left free to roam the streets would be the most desperately dull people in America. The country would look just like it would have if the Nazis had won the war – clean and safe, and terribly, terribly wrong.

Celebrating the March arrests, ignorant of the blowback that would follow, TABC Captain David Alexander said, “Going to a bar is not an opportunity to go get drunk. It’s to have a good time, but not to get drunk.” We, the American people, disagreed. It was like that scene in Chuck Palahniuk’s Fight Club, when Tyler Durden growls to the simpering police chief who is under threat of castration, “Look, the people you are after are the people you depend on. We cook your meals, we drive your ambulances. We connect your calls, we guard you while you sleep. Do not … fuck with us.”

But this is not the end. Note the TABC’s insistence that this is a “temporary suspension” of the program. If the commission reactivates Operation Last Call, and we do nothing, we will have lost. Drinkers must remain eternally vigilant against the attacks of the Dumb and the Self-Righteous. Beck insisted that the program had not been halted due to complaints, but only “to give us time to sift through all the information we’ve received and put together this information and determine the best way to proceed.” It is morning again in Texas, but dark clouds mass on the horizon. And if we care not for our basic rights as decent, if drunk, American citizens, the storm will surely follow.