The Andy Griffith Show is widely considered one of the most innocent and endearing television shows of all times.

Yet drunkenness and moonshining were major comic devices used on the show across eight seasons, in addition to domestic violence, homelessness, the Confederacy, herpes, smoking in bed, cross-dressing and the occult, all heightened with canned laugh tracks. In Mayberry you are either stone sober or bleary-eyed drunk, with no moderate drinking indicated or shown.

There is, of course, the town drunk, Otis, who acquires bootleg liquor from various moonshiners in that dry county on a regular basis and regularly celebrates the anniversary of his first drink. But others are also getting drunk in Mayberry. Barney Fife is drunk at least three times, once with Otis in jail, once by accident, and another time by imbibing “Mulberry squeezins” made by the Darlings, in the middle of the day. He gossips about the dipsomania in town whilst tracking down and smashing stills. (His cross-dressing, dabbling in the occult and chain letters are not within the scope of this article.)

Mayor Stoner is inebriated, as well as Aunt Bea and the Women’s Auxiliary, both midday, and even Opie’s chicken, which Andy described as “sozzled.” This drunk chicken was shown fully sloshed, unable to stand. Feigning drunkenness was British visitor Malcolm Merriweather’s way of losing his job at Andy’s house on purpose.

Bootleggers included the obvious hillbillies like Rafe Hollister, Ben Sewell, Rube Sloan, Jubel (who accidentally burned down his own barn while making hooch) and a third generation dirt farmer being displaced for a highway, who was producing moonshine in his chicken coop. But there were also two elderly ladies, Miss Jennifer and Miss Clarabelle, the Morrisson sisters who produced out of their hot house next to their prize flowers, “only for special occasions.” I’ll wager most of the population has learned about stills and moonshining from the Andy Griffith Show. 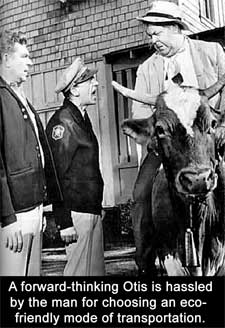 Mayberry’s town drunk Otis Campbell weaved and wobbled his way into television history. He acts like a baby when drunk, sees pink elephants, sings gilded age songs, and takes on a child-like charm. He comes in regularly on Saturday nights. One terrible morning after, Andy prepares a remark-able hangover cure for him. This is the recipe: take a tall glass of orange juice, add a big splash of A-1 sauce, a medium dash each of Worcestershire sauce and Tabasco, and plop in a jumbo raw egg. Andy calls it a “fixer-up,” “to hep ya enjoy your food.” The question is, how does Andy know of this powerful hang-over cure? Hmm? He is never seen drinking, except one time when hooch is accidentally sprayed in his mouth as Barney is smashing the elderly women’s still. Otherwise he drinks nothing stronger than a phosphate, until the seventh season.

The problem of Otis’s drinking and driving is handled in one episode, but he sells the car before going drunk driving. When his brother is in town, we learn that drunkenness is hereditary in the Campbell family. Oddly enough, Otis only drinks on the weekend. What kind of an alcoholic is that?

Barney’s drinking is a more complex subject. He seemingly can’t distinguish the difference between the taste of hard water and hard liquor. That’s how Andy discovered Jubel’s bootlegging operation that was housed in his barn which burned. After several dippers of what Barney thought was well water, he became so pie-eyed that Jubel and Andy had to carry him to the squad car. In the episode in which Barney gave the governor a ticket, Otis has been incarcerated and poured his booze in the spring water crock, and all Barney and Mayor Stoner can say after they drink from the crock is that it needed cleaning out. In the meantime they both got crocked.

Barney has a depressive reaction to liquor, getting drunk very quickly due to “an immediate liver reaction,” tending to drench himself in a morass of self-pity and transposing the first letters of words in phrases, like “put that in your pipe and poke it.”

When not accidentally drunk he gossips about other Mayberry boozers, like Sam Burton, husband of the long suffering Mrs. Burton, and the soon to be divorced drinker Loraine Fletcher, indicating their drinking by shaping his hand like a bottle, tilting the head, and faking the sound of swallowing, “dlt dlt dlt dlt dlt dlt dtl dlt dtl.” The character of Barney Fife received enormous popular validation when Don Knotts was awarded 5 Emmys in a row in the 1960’s.

Aunt Bea’s stupor was caused by a tonic sold to her in the very streets of Mayberry. After she had half a bottle and was feeling great, she turned on the whole Women’s Auxiliary. They have a wild party in the early afternoon with singing and piano playing and were all arrested a bit later by Andy for being “gassed.”

Oddly enough Aunt Bea’s close friend Clara Edwards was not amongst them that time. All across the eight seasons of “The Andy Griffith Show” she is the epitome of absolute temperance, reverence and sobriety. But check her out in the final scene of Rosemary’s Baby when she raises a big glass of wine and hollers “Hail Satan!”

Makes one ponder if there are not suppressed episodes of “The Andy Griffith Show.”