Trudy Burnstein may call herself the Defense Minister of The Womyn’s Prohibition League but her organization is decidedly on the offense. Since its incarnation in 1998, the WPL has wracked the NYC area with protests, publicity stunts and the defacement of liquor billboards. All with a single objective in mind — smashing that beer out of your evil hand. MDM correspondent Giles Humbert III attempts to find out why.

Modern Drunkard: May I call you a Wipple?

MD: It’s a play off your acronym WPL. Wipple. As in, “The Wipples would prefer you chaps lay off the hooch.”

MD: As you wish. You’re a splinter of MADD, correct?

TB: Some of us earned our stripes in the Mothers. But we always felt MADD was too conservative and wasn’t going far enough. They’re mostly just a bunch of housewives and lonely old men concerned with stopping drinking and driving while we—

MD: Make it illegal for every human on the planet.

TB: We’re going to start with the United States.

MD: What do you think of your chances?

TB: Better and better. Everyone is starting to realize what an evil 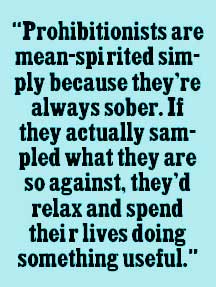 influence alcohol is, how—

MD: The majority of American adults drink, you know. How do you propose to take away something the majority enjoys?

TB: The majority jaywalk too, but that doesn’t make it right.

MD: Yes, but that doesn’t mean you should cut off their legs, does it?

TB: Why would we do that?

MD: So they can’t jaywalk. They could still jaycrawl, I suppose, then the arms would have to go.

MD: Righto. What of all the medical reports that say drinking in moderation is quite good for you?

TB: Those are falsifications.

MD: Harvard, the AMA, and the Swiss, Japanese, French and British governments are all lying for some diabolical reason?

TB: They—what studies are you talking about?

MD: There’s about a hundred of them. Also, the pope drinks wine. Perhaps they’re in cahoots with the Catholics, if you’re into conspiracies.

TB: The WPL doesn’t concern itself with conspiracies.

MD: Yes, but you must realize, my dear girl, that—

MD: Believe me, I was using the term lightly. What in blazes are you then? I’m at a complete loss.

MD: You’re spelling that with a Y, I’m sure.

MD: Fair enough. But since woman and womyn are pronounced essentially the same way, how do you know I’m not secretly using the chauvinist pig version?

MD: Right you are. Can I ask you to call me sir?

TB: Sir is derived from Sire and you are not my master.

MD: Ah, but there is royal blood beating through these veins, I am descended from—

TB: That’s not my fault.

MD: I should say. I see by your website’s mission statement you are also against tobacco, gambling, marijuana and pornography.

MD: And when you say pornography, you’re including Playboy?

MD: So you’re against anything that’s even vaguely fun.

TB: If that’s what you call fun, I feel sorry for you.

TB: Because those are sad ways of having fun.

MD: Have you ever even been inside a bar?

TB: Believe it or not, we hold some of our fund raisers in bars. They’re not allowed to serve, of course.

MD: In bars? Are you sure? What are the names of these turncoat pubs? I’ll have them reported at once.

TB: Reported to who?

MD: The United Booze Federation, I should imagine.

TB: Never heard of them.

MD: You and your cronies will soon enough. Tell me, have you ever partaken in a drink?

TB: I made a lot of mistakes in college.

MD: College? Oh, you were probably swilling keg beer and wine coolers. I think if you tried a decent scotch you might change your mind about all this—

TB: The taste isn’t important. It’s what alcohol does to people.

TB: It brings out their worst.

MD: Occasionally. But it also brings out their best.

TB: The same could be said about war.

MD: So you’re against war too?

MD: Yet in your mission statement you say your group has declared actual war against alcohol and anyone who uses it.

TB: That’s right. But that’s a different kind of war.

MD: Of course. So you’re at war with me, personally.

TB: Are you a drinker?

TB: Then you are my enemy.

MD: Excellent! How do you propose to attack?

TB: We are already attacking. Through the media, through awareness campaigns, through—

MD: That’s not war. That’s propaganda. Have you heavy cannon? Archers? Horsewomyn?   Will you lay siege to the pubs? This could be rather exciting. I can imagine chaps about to head out for the bar, their children helping them don their armor, swords honed against immediate peril. The bartender would blow some sort of ram’s horn and the heavily armed and whiskey-emboldened drunkards would sally into the night to do battle with your poorly-trained irregulars. After thrashing the daylights out of you, we would fall back to the pub for victory cocktails, our wounds tended by sympathetic barmaids.

TB: Typical male fantasy. We’ll defeat you in the courts and Capital buildings. 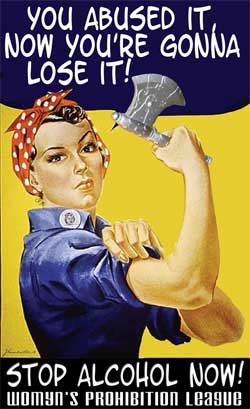 MD: What a pity. That doesn’t sound nearly as exciting. Now, I’m looking at one of your posters from the WPL website. The one with the woman with the hatchet.

TB: It’s on the wall above my computer.

MD: The woman in the poster is speaking about alcohol, isn’t she?

TB: Of course. The hatchet is a traditional symbol of the womyn’s temperance movement. In the old days empowered womyn used hatchets to smash beer barrels.

MD: By the rather savage gleam in her eye, I was thinking she might be talking about castration.

MD: Are you suggesting the threat of castration might be an effective way to get the chaps off booze?

MD: My Lord. I’ll be sure to wear a codpiece when I sally forth. Were you a heavy drinker back in college?

TB: No. But many of our members are reformed alcoholics.

MD: A federation of turncoats, eh? Tell me this—if you were successful in taking away all these pleasures, what would the average citizen do after work? Read the Bible and pray?

MD: Great God! What do you do after a long day of trying to deprive people of their fun?

TB: I’m not trying to deprive people of their fun. I’m trying to save them.

MD: Save them? From what? From enjoying themselves? From excitement? From being human?

TB: From a life of misery.

MD: If you want to see misery, take the booze away. People would be crying in the streets. They’d be drinking aftershave.

TB: If they’re that dumb and weak, they deserve to be poisoned.

MD: Indeed. I must confess, I’m having a terrible time understanding your motives. Why would you care if some chap has a glass of scotch in his home? How does that affect you?

MD: He has no wife. There’s not a single human being in the house to thrash the daylights out of.

TB: What if he gets in a car—and don’t tell me people don’t drink and drive. A good friend of mine was killed by a drunk driver.

MD: Would you feel better if he or she was killed by a sober driver? They’re responsible for most traffic accidents, you know.

TB: With a sober driver it’s an accident.

MD: But drunk drivers do it intentionally, they prowl the streets, looking for old ladies to run over.

TB: Listen, I’ve heard all these arguments before and I’m not interested in them. Let me ask you a question—why do you drink?

MD: I find it gets me through good times and bad. For example, I’m having a scotch right now, while talking to you. And, trust me, it’s helping me immensely.

TB: No, you go because you’re an incomplete person. Your personality needs a crutch.

MD: And what if that were true? Why would you take away a cripple’s crutch? Is anyone that cruel?

TB: It’s the only way to teach him how to walk.

MD: Perhaps he has no legs to walk on. Perhaps he’s a victim of your jaywalking campaign. I have a theory. I believe prohibitionists such as yourself are so mean-spirited simply because you’re always sober. If you actually sampled what you are so against, you’d relax and spend your lives doing something useful. It’s a conundrum wrapped in a vicious circle.

TB: You’re a jerk wrapped in an asshole.

MD: Creature, this is no way to debate.

TB: This was supposed to be an interview, not a debate. Creature?

MD: I meant it in the non-gender sense. So, because you don’t like the hooch, no one else should have any. I don’t like Barney the purple dinosaur, but I’m not prepared to assassinate him.

TB: If Barney was pushing alcohol, I’d kill him in a second.

MD: I believe you would. You are aware, I’m sure, that they’ve tried prohibition before. It failed miserably. Drinking actually went up each year of prohibition and it served to create the Mafia and gift the general public with a thorough disrespect for the law.

TB: It failed because people were more ignorant then, and the laws were not enforced aggressively enough.

MD: They were not enforced aggressively because the enforcers were drinking as much or more than those they would persecute. Where do you propose to find these new enforcers who would not take a drink?

TB: We’ve plenty of volunteers. They’ve got prohibition to work in Muslim countries.

MD: Yes, but they have Allah on their side. And would you want to live there? Women aren’t allowed to drive or vote or—

MD: Right. You’re based in New York. I thought that town was all about personal freedom and—

TB: Don’t worry, we’ll be coming to your town soon enough. Where are you calling from?

MD: I must confess I’m afraid to tell you. Will you bring your hatchet? Airport security is quite tight now, you know.

MD: The United Booze Federation will set up roadblocks. Anyone with a hatchet or refusing to do a shot will be sent to the nearest Hooter’s for re-education.

TB: You know, it’s people like you that got me out of the bars and into the streets.

MD: Why, thank you. For the interview, I mean.