We human types have been scribbling history for perhaps 5,000 years, but we’ve been making fermented beverages for at least twice that long. The brewing of beer and wine predates literature, philosophy, and even written language itself. Forget wine lists and beer ads — it was strictly a word of mouth operation.

A robust wine-making culture was booming in ancient Transcaucasia (modern-day Iran and Azerbijan) at least as far back as the Neolithic period, circa 7,500 BC. Archaeologists also report their methods of growing grapes and making vino were quite sophisticated and nearly identical to those we use today. The only real modern improvement upon the process has been in the area of storage; corks seal bottles better than fired-clay stoppers.

As wine-making spread across the ancient world, it rapidly became both a tradeable commodity and an intrinsic part of religious life. Before money came along, wine and beer filled that role, fueling economies around the Mediterranean and northwards into Europe. Those more concerned with heavenly rewards found a use for it too: drinking and intoxication became central to the rites and festivals of the world’s religions; it’s hard to find examples of one without the other. This is particularly true of the ancient Egyptians.

A River of Wine
Today, we are thrilled by the 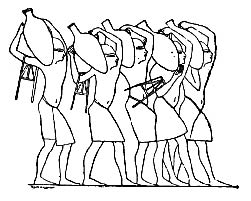 architectural achievements and cultural trappings of ancient Egypt — the pyramids at Giza, the hulking and mysterious Sphinx, the stunning wealth of Tutankhamun’s tomb in the Valley of the Kings, the fabulous foreignness of hieroglyphic writing, and the weird and other-worldly images of gods with animal heads. The people of that desert culture were warriors, poets, lovers and priests. That they were also raging drunkards is a fact that is usually ignored today, as if the very idea somehow casts a pall upon the grandness of their culture. Well, tough luck, teetotalers. Drunks they were, and no amount of PC revisionism will make it otherwise. They not only considered wine and beer a roaring good time, they thought them gifts from the gods, specifically handed down to we mortals because the big shots upstairs really dug our style.

One of the most popular festivals in ancient Egypt was the heb-sed, or sed-festival, thrown in honor of the pharaoh. Marked by feast days and religious rituals, it might roar on for months on end. It was meant to give the monarch a long life, to ensure his passage into the afterlife, and to encourage the life-giving Nile to keep up the good work. Special wines were imported for the heb-sed, and were stored in specially created jars which were destroyed when empty, much like we sometimes like to smash champagne glasses into the hearth. The bill for the festival was footed by the area’s wealthy elite, each vying with the next to show his fealty to the pharaoh by dint of the largest shell-out. Modern day millionaires should take note.

Part of preparing for the next sed-festival was creating new wine-storage vessels, decorated with prayers to the gods, and descriptions of the pharaoh’s deeds. Egyptian wine labels were also full of other cool information: in addition to   sucking up the gods and pharaoh, the labels also made the same broad claims you’ll find on booze labels today. Descriptors such as “genuine,” “good,” and “very, very good” were common. The labels also told you what the wine was meant for: specific jars might be earmarked as “wine for offerings,” “wine for paying taxes,” or (undoubtedly the most popular vintage) “wine for merry-making.”

Floods and Festivals
The most important religious shindig of the year was the Wag Festival, in honor of the god Osiris. According to myth, Osiris, a prince among the gods, was betrayed and murdered by his brother, Seth. The details of their conflict vary according to which hieroglyphics you’re reading, but the end remains the same: Osiris gets whacked. After staving in his sibling’s head with an axe, Seth dismembered Osiris’ corpse and scattered the pieces up and down the Nile. Osiris’ wife, Isis, journeyed far and wide, gathering her husband’s limbs, torso, and demolished head, then exercised various of her other-worldly powers and resurrected the dead prince. Osiris immediately knocked up Isis, who gave birth to Great Horus, the falcon-headed god, who avenged his pop by destroying Seth’s material form, banishing the jackal-headed god permanently to the darkness of the underworld. If you still think the Egyptians didn’t like to tie one on, try to imagine a sober society coming up with that wild ride.

Osiris also had the distinction of being the resident god of wine, and during the Wag-festival his name was expanded to “Lord of Wine in the Flood.” The festival celebrated Osiris’ death and rebirth, and coincided with the annual flooding of the mighty Nile. It also coincided with the reappearance in the nighttime sky of the star Sothis (Sirius) and heralded the arrival of the Egyptian new year. The circle of life — birth, death, rebirth — unbroken.

Then, right at the height of the mayhem, it ended. Bang. Douse the torches and go on home. But join us again tomorrow, if you please, just down the road at Dendara, for a little party we like to call the Intoxication of Hathor.

How Beer Saved the Human Race 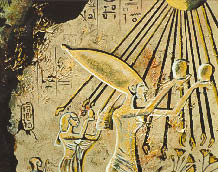 Located right on the Nile between Abydos and Thebes, Dendara was a giant city-sized temple dedicated to the goddess Hathor. She was a multiform deity; sometimes depicted as human with a bovine head, other times as a pregnant cow. In contrast to conventional tastes, the Egyptians of the time considered her something of a hot number — and also extremely dangerous. Hathor had what we call today multiple personality traits. On one hand she was the benevolent patron deity of scribes, while on the other she was the main enforcer of Re, the king of all the gods. When Re had a beef with humanity he sent Hathor in the form of the hellish lion Sekhmet to do his bloody work. Two extant papyrus scrolls, “The Death of Mankind” and “The Heavenly Cow,” detail Hathor in all her violent glory — she got medieval on humanity’s ass long before the word even existed.

For example, Re once became enraged with humankind for welshing on some manner of debt, so he dispatched his main hitter Hathor (as Sekhmet) to rub out the lot of us, man, woman and child. Hathor/Sekhmet went right to work with her usual dedication to duty, clawing and chewing people to shreds. She was about half done with the job when she became distracted by a lake of red beer. Wiping out humanity is hard work, so she naturally paused to slake her thirst. She must have been really thirsty, because she ended up getting so hammered she couldn’t finish the job. By the time she sobered up Re had forgotten what he was so worked up about and humankind was let off the hook. So next time you think you’re about to get fired, invite the boss down to Happy Hour. Maybe you can drink him out of the idea.

When the Nile floods the fields, the water takes on a reddish tint from the soil, looking much like a red lake. So it made sense that each year when the waters returned to the Nile and flooded the fields, the Egyptians honored first Osiris then Hathor, celebrating divinity and their own continued health and prosperity.

Drinking with the Scorpion King
The grape vine is not indigenous to Egypt and in the earliest days of their civilization, grapes weren’t cultivated locally. The Egyptians managed to become great connoisseurs and collectors of wine despite the fact, relying entirely upon imports from neighboring tribes. They became the first great wine importers in history, and in this crowded market one man in particular stood head and shoulders above the rest. He was a Dynasty Zero king, so called because his name and reign were unknown to the Hellenistic priest Manetho, the guy who came up with the canonical lists we now use to organize the ancient Egyptian Dynasties. This monarch of the vine went by the name of Scorpion I.

That’s right, the Scorpion King was a real person, though his resemblance to The Rock is open to debate. The movie bearing his name is a garbled mishmash of historically blurry cultural references, but we know a few things for sure. His tomb was found near Abydos (the center of Osiris worship) some 5,000 years after his interment. The tomb was lavish beyond all other examples from the period, indicating the breadth of his power and influence. This is not surprising when we consider that he is thought to be the first ruler to unite Upper and Lower Egypt, collecting all the various tribes of the Nile under one aegis.

According to hieroglyphics in his tomb, Scorpion loved his food and wine. The second largest room of his funerary complex, just a tad smaller than his actual burial chamber, was a wine cellar. He was buried with 700 jars of wine comprising some 4,500 liters of the stuff for his journey into the afterlife, just in case the after-hour joints were a little tight with the juice. If size and location are any indication, wine was more important to his funerary trappings than all his other treasures combined. The amount of wine is all the more surprising because chemical analysis shows it was pressed from grape species unknown to Egypt at that time, and most likely imported from the other side of the Taurus Mountains in Turkey. It would’ve taken many months, if not years, to bring the stuff overland to Scorpion’s funeral feast.

Live by the Nile, Die by the Nile
Life among the ancient Egyptians revolved entirely around the cyclic comings and goings of the River Nile. They understood that without its fertilizing effect they would be just another ragged tribe scratching for existence in the middle of the desert.

They documented the Nile’s central role hieroglyphically on many monuments and tomb murals, symbolizing it in the form of a grape vine. Wine and life-giving waters were on equal footing in Egyptian culture, and they also shared a duality in both myth and in fact. The Egyptians saw each as simultaneously nurturing and dangerous. The Nile’s ability to give life was symbolized in the resurrection of the wine god Osiris, while Hathor reflected the river’s sometimes wanton destructiveness. The Nile floods kept them alive by fertilizing and watering the fields, yes, but also sometimes got a little carried away and destroyed houses and shrines.

The same can be said of wine, can it not? Taking it up is akin to laying your life’s foundation along the Nile. We drink and adore wine with the tacit understanding that, along with the good times, some sort of mayhem is likely to manifest on occasion. Which seems somehow right. Is it possible, or even desired, to enjoy life without a little danger thrown in it? The ancient Egyptians didn’t believe it, and neither do I. You ask me, they go hand in hand like Osiris and Hathor.

(Note: the author is indebted to the work of Patrick E. McGovern.)