Paralympic soccer player Josh Blue has won the European Cup in Holland. Stand-up comedian Josh Blue was the Last Comic Standing in Season Four. In between he finds time for a drink. 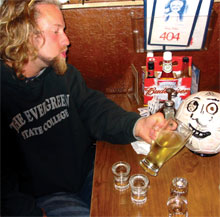 Which flavor? I believe it was ass. I was 11 or 12, my Vietnamese neighbors were nice enough to share. It was pretty uneventful since I was already walking funny.

The usual? I prefer a strong White Russian, but anything that lands in front of me, I’ll drink.

What pays the tabs? Other people.

Drunkest ever? Got so drunk once, I passed out then woke up with the spins and extreme cotton mouth. I needed to drink some water, but I was afraid if I got up I’d just fall down. I rolled over and saw the water bottle on the hamster cage, drank all of it. The look on the hamster’s face the next day was priceless.

Ever been 86ed? Yes, but it’s usually before I have had a drink. I am always having to explain the palsy. Once they get that I can do anything.

Hangover Cure? Corn dogs ‘til I get the spins.

The mark of a good bartender? They come to me first with mistakes.

What do you drink abroad? Mistakes I can’t pronounce.

Ever drink before a game? No, but I think I am more efficient hung over. I don’t want to run as much so it forces me to make wise decisions.

What sort of bars do you prefer? All. When an entire soccer team with palsy walks into a bar that bar changes immediately. It’s ours.

Did Pele drink? If he’s sitting with me, he’d better. I’d also like to drink with Big Bird, so I too could see the invisible Snuffalupogis.

Why must we drink? In my case, genetics.

Drunkard of the Issue #60: Johnette Napolitano